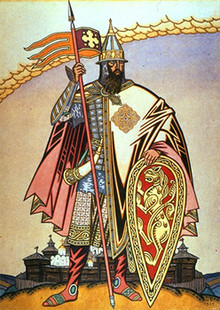 Igor Svyatoslavich the Brave is Prince of North Novgorod, which was one of the principalities of disjointed Medieval Rus. He is known for his unsuccessful campaign against the nomadic Cumans, as recorded in “The Lay of Igor’s Campaign”, the most celebrated epic of Kievan Rus.

Rus in the time of Prince Igor

Prince Igor is not recorded in the main genealogy of Russian rulers – traditionally, the royal line was traced by the rulers of Kiev, who were the only ones to hold the title of Grand Prince of All Rus. Igor inherited the rule of North Novgorod, a minor principality far away from Kiev.

The great state of Kievan Rus, which was united under Prince Oleg, and was at the height of its prosperity during Vladimir and Yaroslav the Wise failed to stay united. It was divided into many principalities, which often fought with each other for territories, setting the economy, trade and defense into deep decline.

This is the time when the Cumans came to the southern borders of Rus. In the late 12th century Prince Svyatoslav (Igor’s father) united once again the princes of Rus and together they drove the Cumans far back into the steppes near the Black Sea. However, the peace didn’t last long, as a few years later the nomads once again came close to raid Rus.

The Lay of the Host of Igor

Slovo o Polku Igoreve (The Lay of the Host of Igor), tells the story of the unsuccessful campaign of Igor against the Cumans in 1185. It is acclaimed as the highest achievement in Russian literature of the Kievan era.

The Lay consists of three parts - the story of Igor’s campaign, Kiev’s call to reunite and Yaroslavna’s (Igor’s wife) lamentation.

In the first part Prince Igor decides to free Rus of its old enemies, the Cumans. There is a sun eclipse on the day the troops set out to war – however, Prince Igor ignores the bad omen and continues on his way. He is joined by Prince Vsevolod of Chernigov on his way, and together they step onto the land of the Cumans.

He defeats the enemy, taking much wealth for trophy, and decides to continue his campaign until the Cumans are totally destroyed. However, he had merely won a battle – the Cumans have retreated to prepare for a massive attack. Igor and Vsevolod realize at once they are overpowered, but still decide to take on the battle.

The fight acquires a never-before-seen scale. It goes on for three days, practically totally destroying the Rus, with Igor himself taken captive. The whole land of Rus mourns the losses, while the Cumans are encouraged for further attacks.

The second part of the Lay takes the reader to Kiev, where the Great Prince Svyatoslav is mourning his cousins at the same time blaming them for the state of Rus after their campaign. He calls them brave but senseless, bringing great sorrow by their venture. At the end Svyatoslav addresses all princes of Rus to unite against the enemy.

The third part is the most poetical of the whole narrative. It is the mourning song of Yaroslvana, Igor’s wife. She appeals to the mighty powers of nature to help her husband return home. Soon Igor escapes from captivity, and acknowledging his guilt, goes to Kiev to Great Prince Svyatoslav. The epic ends with the author's call to unite in the face of the enemy – something that wouldn’t happen for hundreds of years.

Apparently, there was no restriction of freedom of speech in Igor’s time because the Lay is far from flattering to the Prince. Although he is described as a brave warrior who wanted to free his land from the nomads, he is also shown as foolish, continuing his campaign while ignoring the fact that he is doomed to fail. The only driving force behind his decision is vanity. His quest for glory is likened to the solar eclipse, which keeps him from seeing clearly.

Until Igor’s campaign, the Cuman’s didn’t realize how truly weak and divided the Rus was. Igor is held responsible for opening up his country to the enemy. Indeed, the nomadic raids resumed with greater power, and soon ended in complete subjection of Rus under them – forcing them to pay tribute and practically bringing any kind of development to a hault, which lasted for centuries.

The translation and printing of the Lay 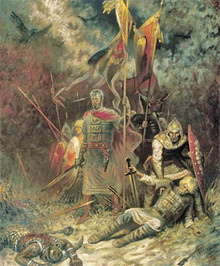 Sometime between 1788 and 1792 Count Musin-Pushkin, a bibliophile and amateur of Russian antiquities, acquired a number of old documents from Archimandrite Loil of the Monastery of the Savior in Yaroslavl. Among them was an unfitted manuscript concerning the campaign of Prince Igor against the Cumans in the spring of 1185.

Although this group of documents was thought to date back to the 16th century, Musin-Pushkin later wrote that he believed the manuscript of the Prince Igor tale was written in a script typical of the late 14th or early 15th centuries. Several copies of this manuscript were made, including the one for Empress Catherine the Great.

When Musin-Pushkin's Moscow house burned during the Napoleonic invasion of 1812, his priceless manuscript collection, including the original manuscript of Prince Igor, was destroyed. The “Catherine’s Copy” of the poem was preserved, although unfortunately, it, too, contained a number of obvious errors. Working on the basis of the “Catherine’s Copy” and the first edition of 1800, scholars have reconstructed the original text. Nevertheless, there are still a number of passages under question.

As to the author of The Lay of the Host of Igor, and the date when it was written, scholars presume that the author belonged to Igor's court and was a warrior, and, as is evident from his Lay, he was very familiar with the life and environment of the steppe. It is true that the writer of the Lay often mentions Boyan, a story-teller who apparently lived in the 11th century, but no details are known either of his life or of his poetic works.

Several prominent Russian writers have worked with the text to translate it into modern Russian – among them are Vasily Zhukovsky, Konstantin Balmont and Evgeny Yevtushenko. Vladimir Nabokov not only translated it from old Russian into new, but also into English, preserving the stylistic peculiarities of the Lay.

Following is an excerpt from the very beginning of the epic:

“Would it not be fitting, brothers.
To begin with ancient words
The sorrowful song of the campaign of Igor,
Igor Svyatoslavich. Now let us begin this song
In the manner of a tale of today,
And not according to the notions of Boyan.
Now the wizard Boyan,
If he wanted to make a song to someone,
His thought would range through the trees;
It would range like a grey wolf across the land,
Like a blue eagle against the clouds.
His words would recall the
Early years of princely wars:
Then he would release ten falcons
Onto a flock of swans;
The first swan to be touched,
It would be the first to sing:
To old Yaroslav, to brave Mstislav,
Who cut down Rededya before the
Armies of the Kasogians,
To the handsome Roman Svyatoslavich.
Now Boyan, brothers, would not
Release ten falcons
Onto a flock of swans,
But his magic fingers would
He place on the living strings,
And they themselves would
Sound forth praises to the princes...” Translated by Robert C.Howes

In 1869, Vladimir Stasov, a well-known literary figure of the 19-century Rus, suggested that Aleksandr Borodin write an opera on Lay of Igor’s Campaign. Borodin began to write his Prince Igor opera, but he left it unfinished at the time of his death nearly twenty years later. It fell to Nikolay Rimsky-Korsakov and Aleksandr Glazunov to finish the orchestration and prepare Prince Igor for publication and performance in 1890.