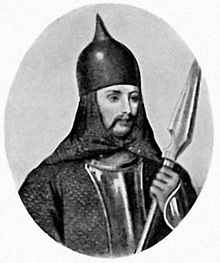 Oleg Veshchy’s date of birth is unknown. He died between 912 and 922 and is traditionally considered to be the founder of Kievan Rus.

Oleg’s name has for a long time been associated with a number of legends. Over a period of time these stories have become an essential part of what we, people of the 21st century, traditionally imagine when thinking about the ancient history of Russia. Evidently, the general history of humanity has many hidden and undiscovered facts, but the degree of assumptions and speculations increase when we look back at the oldest eras of our past.

According to the most traditional theory, Oleg originated from the Varyags, also known as Vikings or Norsemen from Scandinavia, who in the 9th century traveled eastwards and southwards through what is now Russia, Ukraine and Belarus. Old Russian annals attribute the formation of Kievan Rus, a medieval state of the 9th - 13th centuries, with the Varyags, and particularly with Oleg.

There are two main versions of Oleg’s biography. The version described in greatest detail is given in the Primary Chronicle (the main source used for this article), while another – the Novgorod First Chronicle contains fragments from an older code and features an unclear chronology. 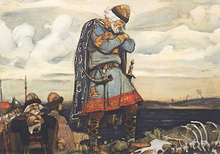 According to the Primary Chronicle, Oleg was a relative of Prince Rurik, who in 862-879 ruled Novgorod (currently a city in the northwest of Russia) and founded the Rurik Dynasty, which later became the dynasty of the Russian tsars. When Rurik died in 879, his son Igor was too young to inherit the throne and Oleg became the Novgorod Prince.

Novgorod’s economy was greatly dependent on the exchange of goods. In order to improve a weakened economic situation, Oleg decided to access to the big and strategic trade route known as “from the Varangians to the Greeks,” which connected Scandinavia, Rus and the Byzantine Empire. In 882 he started a military campaign and occupied two towns, Smolensk and Lyubech. Having moved down the Dnieper River, Oleg came to Kiev (now the capital city of Ukraine). At that time the town was governed by the two Varyags, Askold and Dir. According to the Primary Chronicle, they were Rurik’s men-at-arms, who left their ruler and settled separately.

Oleg managed to entice Askold and Dir to his boat, and, having presented them the young Igor as 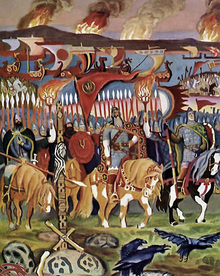 the lawful heir of Rurik, immediately killed them. It is worth mentioning that according to other historical theories, Askold and Dir lived in different times, and didn’t die on the same day.

Oleg, considering Kiev a convenient and strategically important place, moved there together with his armed forces. The new ruler proclaimed Kiev “the mother of Rus towns” and thus joined the two main centers of the eastern Slavs (also known as Slavic people). Because of this unification, Oleg, instead of Rurik, is usually thought to be the founder of Kievan Rus as a state.

In 907 Oleg gathered his army to attack Tsargrad (Constantinople), the capital of the Byzantine Empire. According to some historical records, around 2000 boats, each with 40 people aboard, took part in this campaign. The Byzantine emperor Leo VI the Wise ordered the gates of Constantinople closed and a chain to be put across the bay that lead directly to the city. According to the Primary Chronicle, the Rus army attacked from the least expected side: “Oleg ordered his warriors to make wheels and put boats on wheels. And when a tailwind blew, they set sails and went to the city.” Experts say it is practically impossible to move ships like this. Presumably, it was an advanced tactic used by the Rus army, wherein a large group of soldiers could drag sea vessels across land.

As a result of this unusual attack, Constantinople was besieged both from land and sea. The 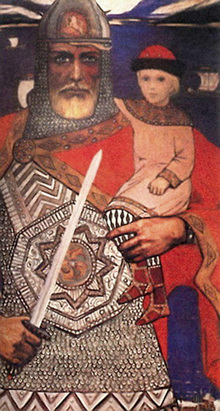 Greeks had to start peace negotiations, saying, “If you don’t destroy the city, we will give you as much tribute as you want.” Oleg told them to pay 12 grivnas of silver per boat, amounting to 24 thousand grivnas in total, which is equal to either 3120 kg or 4800 kg of silver (depending on the type of currency used). As part of the agreement, the Byzantine Empire also had to pay a regular tribute to Kievan Rus and in return Oleg promised to provide military help to the emperor.

As a sign of his victory, the Kievan Prince nailed his shield to the city gate of Constantinople. There is also information that the Byzantines made an attempt to kill Oleg, having offered him poisoned food and drink. The Prince refused the treat, and this was considered to be a sign of his predictive powers. After the incident Oleg was called Veshchy (Prophet).

The circumstances of Oleg’s death are disputable. According to the Primary Chronicle, he died in 912 and his grave is situated in Kiev. Whereas the Novgorod First Chronicle states that he either died in 922 in the town of Ladoga, or “went overseas.” Interestingly though, both sources mention the same legend, according to which sorcerers told Oleg that his death would be caused by his beloved stallion. Having heard this prophecy, the Prince ordered the stallion to be taken away. After the animal died four years later, Oleg made fun of the sorcerers’ prediction and decided to take a look at the stallion’s bones. A poisonous snake, which lived in the skull of the animal, bit Oleg, and he died soon afterwards.