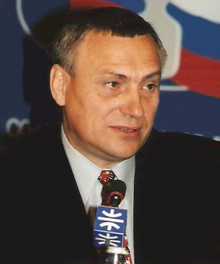 Sergey Cheskidov is one of Russia’s best-known sports commentators. He is recognized for his professionalism as well as the human touch he brings to his coverage of sporting events. Cheskidov was influential in organizing live broadcasts of Formula 1 (F1) races in Russia.

The figure-skating coach on TV

Sergey Yurievich Cheskidov was born in 1947 into a family of industrial workers in the city of Ekaterinburg, a regional center in the Ural Mountains. As a child Cheskidov fell in love with winter sports. His favorite pastime was going to the rink with a pair of skates. At first he played ice hockey but soon switched to figure skating. After excelling in some nationwide competitions in the mid-1960s, Sergey decided to make sports his profession.

In 1963 Cheskidov moved to Leningrad (now St. Petersburg) to study at the Institute of Physical Culture – an educational training center for sportsmen and professional coaches. He combined his studies with performances in various competitions but soon decided that coaching suited him best. After graduation he moved to Moscow to join the school of figure skating at the CSKA – Central Army Sports Club. 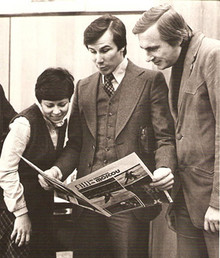 At the time figure skating was enjoying a boom in the USSR. Many parents wanted their children to become as famous as the Olympic champions of the 1960s, Lyudmila Belousova and Oleg Protopopov or the emerging young star of the 1970s, Irina Rodnina, who would later become a three-time Olympic champion. Sergey’s job was to work with children, teach them the basics of figure skating and recommend the best ones to “coaching star” Stanislav Zhuk, who trained dozens of World and Olympic champions. It was Cheskidov who spotted the talent of the young Ekaterina Gordeeva, who would become the Olympic champion together with Sergey Grinkov at the Winter Olympic Games in Calgary, Canada in 1988 and Elena Vodorezova, the first Soviet female singles skater to win a medal at the European Championships in 1979.

According to friends and colleagues, Sergey was passionate about his coaching duties. He asked many of his colleagues who traveled to various competitions to bring him as many magazines and books on figure skating as they could. Cheskidov always wanted to get to the core of things – every detail interested him. And he never kept the information to himself, but shared it enthusiastically with others.

Cheskidov’s storytelling talent was spotted by the star sports commentators Nikolay Ozerov and Georgy Sarkisyants, who invited him to join the Central Television channel in 1976. At that time the management of the studio felt that there was not enough “inside” information in the coverage of some winter sports events – Ozerov and Makharadze, the “kings of the live broadcast,” were professional actors and excelled at expressing emotions in sports like soccer and ice hockey. Cheskidov’s first assignment was to collect information for the “star commentators” who were to anchor the broadcasts of the 1976 winter Olympics in Innsbrruck, Austria. About a year later, he was given a chance to anchor the sports segment of “Vremya” (“Time”), a daily nationwide news program. At the age of 29, Sergey became the youngest news anchor on Soviet TV. From 1980 to 1996 he never missed the coverage of the Olympic Games. During the 1980 Moscow Olympics he not only performed live broadcasts but also acted as a producer in charge of covering some little known sports in Soviet Union. According to Cheskidov, in the more than 30 years of his career, he managed to cover almost every sport broadcast on Soviet and Russian TV.

Figure skating fans all over the Soviet Union liked Sergey’s commentaries. Besides his detailed explanation of all the difficult jumps and moves he always tried to convey the athletes’ feelings as well. He was fair and balanced even when the Soviets did not manage to clinch gold medals – like in 1984 at the Olympics in Saraevo, Yugoslavia, when the gold in the ice dancing competition went to the UK couple Jane Torvill and Christopher Dean. He always analyzed the skater’s performance: not a single detail escaped his attention. After hearing his comments viewers could easily understand whether the judges were right or wrong. 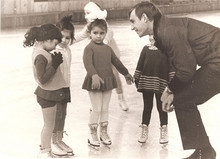 The peak of Cheskidov’s reporting for figure skating came in 1988 when he was covering the victory of his former students Ekaterina Gordeeva and Sergey Grinkov at the Olympic Games in Calgary, Canada. At the end of their performance Cheskidov stood up and shouted into the microphone, “No one ever skated so confidently and passionately like this couple. No referee can cast even a little bit of doubt that they are the best. No one has ever seen such grandeur at the Olympics.”

After the collapse of the USSR Cheskidov became a key sports commentator at the Rossiya TV channel (Channel 2 at the time). The situation with the financing of the broadcasts was disastrous. And even the commentators had to think of how to make money to keep the station going. Cheskidov suggested the coverage of Formula 1 races – an event he had fallen in love with during one of his trips abroad. He oversaw all the negotiations and the event was brought to Russian TV.

The first F1 race was broadcast in the Russian Federation in the spring of 1992 – the triumphant season of British racer Nigel Mansell. In the first three years millions of sports fans switched their TV sets on to watch the races and hear Cheskidov’s emotional and, at the same time, balanced commentary. Cheskidov himself seemed to have been racing, calmly and resolutely, along with the F1 pilots. According to F1fans, Cheskidov made his most moving commentary during the 1994 Grand Prix race in San Marino when the whole world witnessed the tragic death of the F1 king Ayrton Senna of Brazil. The commentator did his best to convey sympathy and sorrow for the remarkable racer.

At about the same time Cheskidov found a partner for his coverage – the young journalist Aleksey Popov who was as big a fan of F1 as Cheskidov himself. Popov is still considered the Russian voice of F1. During the five years of their collective work they constantly thought of new ways to attract more viewers to watch the races. One of their most successful endeavors was “F1 Quiz.” After each broadcast they asked viewers to answer questions connected with the race. The time limit was two hours. Thousands of F1 fans from all over Russia immediately ran to the nearest post office to send urgent telegrams to Moscow with their answers. Some of the lucky ones won tickets to the next race. Cheskidov and Popov also anchored “Chrono”– a weekly TV magazine dedicated to the world of auto racing.

In 1998 Cheskidov decided to try himself as a manager. He became the Head of Sports Broadcasts at TVC – the emerging nationwide channel sponsored by Moscow’s authorities. According to many specialists, one of Cheskidov’s greatest achievements while occupying this position was the revival of viewer interest in ice hockey. By 2000 the situation had become critical – the Soviet national squad had plummeted to 11th place in the annual international ice hockey championships. Fewer spectators wanted to see the teams losing, prompting major national networks to exclude the sport from their broadcasts. Cheskidov decided to show the games with funny graphics, quiz shows and other extras that created an ice-hockey experience for the viewer. He then did the same thing with futsal – a version of soccer played in indoor arenas.