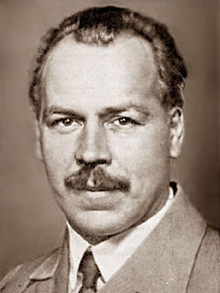 Nikolay Ivanovich Vavilov was one of the most outstanding scientists of the twentieth century. He was a biologist, geneticist, geographer, agronomist and plant breeder. Vavilov had a dream of ending hunger and famine in the world, and his plan was to use the emerging science of genetics to breed super plants that could grow anywhere, in any climate; in sandy deserts and freezing tundra, in drought and flood. He called it a “mission for all humanity.” Vavilov is recognized as the foremost plant geographer of contemporary times. The scientist formulated very important postulates in genetics, wrote more than ten books, and carried out the gigantic task of organizing a system of agricultural institutions in the USSR.

Nikolay Vavilov was born into the family of a businessman in Moscow. There were two sons and two daughters in the family. Nikolay was the eldest. He didn’t follow in his father’s footsteps, and instead he devoted his life to natural sciences. After graduating from the Moscow Commercial College in 1906, Vavilov entered the Moscow Agricultural Institute (now the Timiryazev


Agricultural Academy in Moscow), from which he graduated in 1910. Even in his early student years, Vavilov showed scientific interests that determined his future lines of research: in 1908 he took part in the student expedition to the Caucasus. In 1909 he made a report on Darwin's Theory, and in 1910 he completed and published his diploma work devoted to protecting agricultural plants from pests. In 1912, he outlined a program which implied the application of genetics to improve the cultivation of plants in his pioneering paper “Genetics and Agronomy”. Thus, from his very first steps in science, Vavilov established himself as a geographer, an evolutionist and a specialist in plant protection. It is noteworthy that all his scientific interests were interrelated. He was the first to see the possibility and the vital necessity of investigating cultivated plants from the viewpoints of genetics, evolution, and geography. 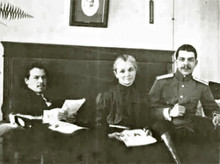 Nikolay (L) and Sergey Vavilovs with their mother Aleksandra Mikhailovna, 1915

In 1913-1914, Vavilov worked in the best laboratories of Great Britain, France, and Germany. In 1916 he went to Iran to study local cultivated plants. From 1917-1921, the scientist was a lecturer at the Department of Agriculture at the Saratov Agricultural Institute, and in 1918 he became a Professor there. Vavilov gave lectures and carried out research at the institute on the peculiarities of cultivated plants growing in the region of the Volga River and also studied the variability of plants. It was at that time he made one of his major scientific discoveries - in 1920 he formulated the Law of Homologous Series in Hereditary Variation, which made it possible to systematize data on variation and to forecast the possibility of finding new plant varieties.

The Head of the Bureau for Applied Botany Robert Regel supported Vavilov. As Regel wrote in his reference letter, “In the person of Vavilov we will employ ... a talented young scientist who would become the pride of national science”. Regel's prediction turned out to be true. From that moment on, all Vavilov's life and creative work were inseparable from the world's largest crop research institute, which he transformed the Bureau into during the 1920-30's. 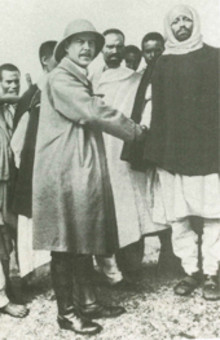 Nikolay Vavilov on a seed-collecting trip in 1927

Theories on the origins of crops

Nikolay Vavilov worked hard, and loved his job. “Life is short, there is no time to lose,” he used to say. Vavilov never did and, although he died when he was only 55 years old, he left behind a whopping 350 treatises on genetics, biology, geography, and selection. Many of his works have since gone down as famous in the history of science. From 1920 to 1940, Vavilov headed the Lenin All-Union Academy of Agricultural Sciences (later named the Vavilov All-Union Institute of Plant Industry in his honor) in St. Petersburg (formerly Leningrad). He established 400 research institutes that employed up to 20 thousand people. Vavilov and his colleagues conducted extensive germplasm explorations and collections in many parts of the world. In 1926, Vavilov published his “Studies on the Origin of Cultivated Plants” which described his theories on the origins of crops. Vavilov concluded that each crop has a characteristic primary center of diversity, which is also its center of origin. Eight areas were recognized and suggested as centers from which all of our major crops were domesticated. Later, he modified his theory to include “secondary centers of diversity”for some crops.

Vavilov was one of the few Russian scholars who braved the rigors of the 1917 October revolution and the Civil War that followed, staying on to work in Russia. He tried hard to persuade his hardship-stricken friends and colleagues to stay with him and work for the benefit of Russia.

A whole-hearted devotion to science 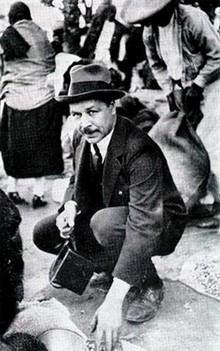 Nikolay Vavilov selecting grain for purchase during one of the expeditions

Nikolay Ivanovich Vavilov was a person of many and varied interests. He was a person of inexhaustible energy and unbelievable efficiency. He was an avid traveler and during his many trips across the world he put together a unique collection of plants and seeds. During three decades of tireless scientific work, Vavilov travelled over five continents, amassed the largest species and strains collection of cultivated plants in the world, and developed theories on how to utilize them for breeding new strains. The activities of Vavilov were extraordinarily varied, but they were all designed to increase agricultural production and to provide humanity with more food. Many of his travels were risky and difficult, especially those in Afghanistan in 1924 and in Ethiopia in 1927. For his expedition to Afghanistan, the Russian Geographic Society awarded Vavilov a special gold medal “For Exploits in Geography”. Back home he established a number of research institutes.

A tragic end of a humanitarian pioneer scientist

But Vavilov, while a symbol of glory of national science, is at the same time the symbol of its tragedy. Stalin's collectivization of farmland caused chaos in Soviet food production, and millions died in widespread famine. Vavilov's master plan for improving Soviet crops was designed to work over decades, not a few years, and he could not meet Stalin's impossible demands for immediate results. To the leaders of the young Soviet state, Vavilov's dream fit perfectly into their larger scheme for a socialist utopia.


Lenin supported the adventurous Vavilov. In a former tsarist palace in what is now St. Petersburg, Vavilov built the world's first seed bank, a quarter of a million specimens, a magnificent living museum of plant diversity that was the envy of scientists everywhere and remains so today. But when Lenin died in 1924 and Stalin took over, Vavilov's dream turned into a nightmare. This son of science was from a bourgeois background, the class of society most despised and distrusted by the Bolsheviks. Vavilov was accused of undermining the socialist agriculture reforms and was arrested. He denied all the charges brought against him, but Stalin’s secret police was keen to eliminate the outstanding scholar.

In Stalin's Terror of the 1930’s, Russian geneticists were systematically repressed in favor of the peasant horticulturalist Trofim Lysenko, with his fraudulent claims and speculative theories. Lysenko began a campaign against Mendelian genetics and attacked Vavilov as a “reactionary, bourgeois, idealist, and formalist.”  For several years Vavilov defended his scientific principles against Lysenko's pseudo-science. But under Stalin's government he could not succeed; he was brought to court and found guilty of sabotage in agriculture, of belonging to a rightist conspiracy, and of spying for England along with a string of other charges and was sentenced to death. But he refused to recant his beliefs.

Vavilov was scheduled to be executed on July 28, 1941 along with many other convicts, but his execution was replaced with 20 years of imprisonment due to the active intervention of Dmitry Pryanishnikov, who begged Beria, head of the NKVD, to be clement. The cell of condemned prisoners where Vavilov was incarcerated was located underground and had no windows. Due to the awful conditions, the scientist contracted scurvy and later suffered from dystrophy. 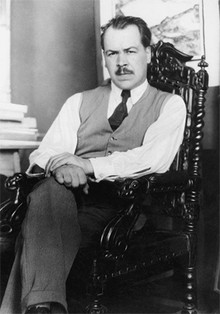 In 1942, Vavilov’s wife arrived in Saratov and lived 2-3 km away from the place where her husband was in custody, but the poor woman was absolutely sure that Nikolay Ivanovich was imprisoned in Moscow. After Vavilov’s arrest, Lysenko took the post of director in the Institute of Genetics and led the pursuit of “reactionary formal genetics”, ending in 1941 and resulting in the arrests and physical destruction of Vavilov’s assistants and friends. The ailing Vavilov, waiting every minute for his captors to come and kill him, reads lectures in genetics to his cellmates and wrote a book called “The History of World Agriculture”, which was never published.

In 1943 Vavilov died of hunger in the Saratov jail on the Volga, and was buried in a common prison grave. Vavilov’s whole life is a remarkable example of his conviction and devotion to science, to his homeland, and to humanity.

The memory of Vavilov

Nevertheless, the memory of Vavilov has been preserved by his followers. During the tragic period of his imprisonment they kept on gathering Vavilov's manuscripts, documents and pictures. Since the mid 1950's, after the official rehabilitation of Vavilov, hundreds of books and articles devoted to his life and scientific accomplishments have been published. Memorial displays have been opened in Moscow, St.Petersburg, Saratov, and Poltava. The name 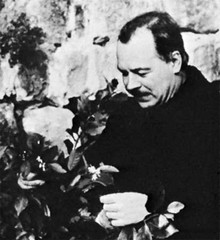 The activities of Vavilov have been widely recognized not only in the USSR, but also all over the world. In 1926 he became one of the first recipients of the Lenin Prize for his work on the origin of cultivated plants. In 1923,Vavilov was elected a Corresponding Member, and in 1929 a Full Member of the USSR Academy of Sciences. He was also a Foreign Member of the British Royal Society, a Member of the Academy of Sciences in Scotland, India, and Germany, made a Member of the American Botanical Society, and granted positions at many other national and international organizations. His name now graces streets in Moscow and St. Petersburg, a glacier in the Pamir Mountains, and another one on the Severnaya Zemlya archipelago. Even a crater on the Moon has been named in his honor.