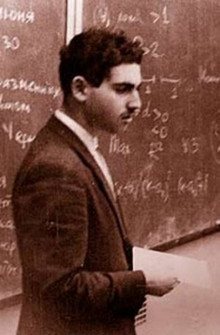 Grigory Perelman is the famous Russian mathematician, who surprised the world twice, firstly – having solved a century-old problem, and secondly when he turned down a $1 million prize for doing it.

Being a very reclusive mathematician, Perelman solved a key piece in a century-old puzzle known as the Poincare Conjecture about the nature of space. The French polymath Henri Poincare posed the problem in 1904. Perelman today is one of four mathematicians to be awarded the Fields Medal.

The Fields Medal, often described as mathematics’ equivalent to the Nobel Prize, is given every four years, and several can be awarded at once. Perelman refused to accept this highest honor in mathematics. “It was completely irrelevant for me. Everybody understood that if the proof is correct then no other recognition is needed.” He also left open the possibility that he would also spurn a $1 million prize from the Clay Mathematics Institute in Cambridge.

In effect, what Poincare suggested was that anything without holes has to be a sphere. The Poincare Conjecture can sound either daunting or simple. It asserts that if any loop in a certain kind of three-dimensional space can be shrunk to a point without ripping or tearing either the loop or the space, the space is equivalent to a sphere. The conjecture is fundamental to topology, the branch of math that deals with shapes, sometimes described as geometry without the details. The problem of proving the conjecture had implications for, among other things, the study of the shape of the universe. Numerous proofs had been suggested and discarded over the years since 1904. Perelman was granted a two-year fellowship to work at the University of California at Berkley beginning in 1993, and, during one lecture, he gave on campus he indicated that he had joined the hunt for a proof of the Poincaré Conjecture.

Born in Leningrad, now St. Petersburg, Perelman was the son of an electrical engineer. His mother was a math teacher. His younger sister Elena also became a mathematician. Perelman’s father liked to challenge his son with brain teasers and taught him to think logically by playing chess. His mathematical talent became apparent at the age of 10, and his mother enrolled him in Sergey Rukshin's after-school math training program. At 14 Perelman was noted as the top achiever in his St. Petersburg mathematics club, and Sergey Rukshin, head of the St. Petersburg Mathematical Center for Gifted Students, began to nurture his high abilities. Two years later he won a gold medal at the International Mathematical Olympiad in Budapest, Hungary. As Olympiad winner, Perelman was enrolled in the Leningrad State University at age 16 and quickly was placed in advanced geometry courses. “There are a lot of students of high ability who speak before thinking. Grisha [Perelman] was different. He thought deeply. His answers were always correct. He always checked very carefully. He was not fast. Speed means nothing. Math doesn’t depend on speed. It is about depth.” Yury Burago, Perelman’s teacher at the university, recalled.

After graduation, Perelman began to work at the renowned Leningrad Department of Steklov Institute of Mathematics of the USSR Academy of Sciences. In the late 1980s and early ’90s, Perelman held research positions at several universities in the United States. In 1991, he spoke at the Geometry Festival on Aleksandrov spaces with curvature bounded from below. In 1992, he was invited to spend a semester each at the Courant Institute in New York University and State University of New York at Stony Brook, where he began work on manifolds with lower bounds on Ricci curvature. From then on, he accepted a two-year Miller Research Fellowship at the University of California, Berkeley in 1993.

Perelman was offered several jobs, but turned those down, opting instead to return in 1995 to St. Petersburg and his old post at the Steklov Institute of Mathematics. Grigory Perelman worked alone, living a Spartan life in St. Petersburg. It is then that he must have made his key discoveries and told no one what he was working on. He said he had enough money saved from a few years in America to provide for himself for the rest of his life in Russia. He moved to his mother’s flat – his father had migrated to Israel by then.

Perelman forged on alone and had little contact with his colleagues for many years. He published several well-regarded papers and was invited to give a lecture at the International Mathematical Union conference in Zurich, Switzerland, in 1994. Top universities in the United States and Israel were eager to have the young scholar over. He refused to submit an academic resume for a position at Stanford University, arguing that if the committee was familiar with his work, they should not need the document to prove his qualifications. Finally he went to Princeton University in New Jersey.

A central focus of Perelman's intellectual life was a weekly lecture series at the Institute for Advanced Study. Perelman and his Chinese colleague Gang Tian, later a key explicator of his work, interacted with the top mathematical minds in the country and the world at that time. At Princeton Perelman met the mathematician William Thurston, who had developed a set of generalizations abstracted from the Poincare Conjecture and expounded upon them in lectures. Perelman also met Cornell University mathematician Richard Hamilton.

On November 11, 2002, Perelman posted a terse and telegraphic article on the website arXiv.org, a site devoted to "preprints" ready to be published in mathematical journals. Perelman's article was called The Entropy Formula for the Ricci Flow and Its Geometric Applications and rather dealt with Hamilton's concept of the Ricci flow than actual Poincaré Conjecture. However, colleagues sensed the break-through.

In May 2006, a committee of nine mathematicians voted to award Perelman a Field's Medal for his work on the Poincaré Conjecture. Perelman declined to accept the prize. Sir John Ball, president of the International Mathematics Union, spent 10 hours in two days trying to persuade the scientist to accept the prize, but failed. “Everybody understood that if the proof is correct, then no other recognition is needed... I don't want to be on display like an animal in a zoo,” Perelman was quoted as saying.

On 18 March 2010, Perelman was awarded a Millennium Prize for solving the problem, but he did not attend the ceremony to accept his $1 million award, claiming his main reason for refusal was “disagreement with the organized mathematical community…. I don't like their decisions, I consider them unjust." Perelman said.

As of 2003 Perelman no longer worked at the Steklov Institute. Allegedly he found mathematics a painful topic to discuss, and he was rumored to have abandoned it.

Perelman succeeded in avoiding journalists and other member of the media, however, Masha Gessen published a book about him titled Perfect Rigor: A Genius and the Mathematical Breakthough of the Century, though she didn't get a chance to meet the scientist in person.

A documentary about Perelman in which his work is discussed by several leading mathematicians was released in 2011 under the title A Man Following a Different Path: A Lesson from Perelman.

In April 2011, Israeli producer Aleksandr Zabrovsky announced about his plans to shoot a film about Perelman. He said it took him three years to convince Perelman to sign on to the project. He then approached James Cameron, the celebrated Hollywood director, who was reportedly enthusiastic about the idea.