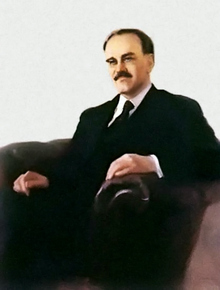 The true last name of Vyacheslav Molotov, an outstanding Soviet politician and state figure, was Skryabin. Born in the village of Kukarka (in the northeastern part of European Russia), he was the son of a salesman and a rich merchant’s daughter. In the family there were ten children, three of whom died in infancy. While studying at school, Vyacheslav enjoyed playing the violin and writing poems. In 1902 he followed the example of his elder brothers and entered the secondary school in Kazan, where he became interested in revolutionary activities and joined the Russian Social Democratic Labor Party. Vyacheslav was one of the leaders of the illegal revolutionaries’ organization of his school, and in 1909 he was arrested for anti-government activity and exiled to the Vologda Region in northwestern Russia. After two years of banishment Vyacheslav went to Saint Petersburg and passed his secondary school exams without attending lectures. In 1911 he entered the Saint Petersburg Polytechnic Institute and continued his revolutionary activities in both Moscow and Saint Petersburg. Vyacheslav was among those who founded “The Pravda” (“The Truth”) newspaper, an illegal publication of the Bolsheviks headed by Josef Stalin. Vyacheslav wrote articles using the pseudonym “Molotov.” This last name originates from the word “molot” which means “large hammer” in Russian. It is the name with which Vyacheslav Skryabin became known in world history.

In 1913 Molotov was arrested and exiled to Irkutsk (Siberia), but he escaped and secretly returned to Saint Petersburg. During the October Revolution of 1917 he was a member of the Military Revolutionary Committee. When Soviet power was established, Molotov, approved by Vladimir Lenin and supported by Stalin, gained his prominence impetuously. For over 30 years Vyacheslav Molotov was among the most influential figures in the USSR. It was he who determined internal and foreign policy of the state.

Molotov proved himself a true supporter of Stalin, especially during the struggle for power that followed Lenin’s death in 1924. When Stalin overcame his political opponents he showed his gratitude to Molotov and made him his closest associate.

In December 1930 Molotov headed the Soviet government. He sincerely believed that reprisals were necessary for overcoming opponents of Soviet power. Thus, his signature can be found on a number of verdicts sentencing thousands of people to exile or death. Stalin also made Molotov responsible for the process of so-called “collectivization of agriculture” in which peasants were integrated into collective farms belonging to the state. Some historians blame Molotov for using cruel measures. Others justify him and believe Molotov was the one who guaranteed the growth of gross domestic product, an increase in state defensive capabilities and the success of industrialization (building up the heavy industry of the USSR). 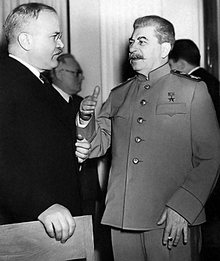 Taking the position of Foreign Minister of the USSR in 1939, Molotov was obliged to adjust the relationship between Germany and the Soviet Union under Stalin’s special order. On 23 August 1939 Molotov and German Foreign Minister Joachim von Ribbentrop signed the treaty known as the “Molotov-Ribbentrop Pact” (also called the “non-aggression pact between Germany and the USSR”). There is a popular version that the agreement included secret protocol about the German and Soviet spheres of influence in Finland, the Baltic States, Bessarabia (nowadays - Moldova) and Poland. Nowadays some specialists deny the existence of the secret protocol. However, other historians believe that the secret protocol gave Hitler the opportunity to invade Poland on 1 September 1939.

In 1940 Molotov turned 50. In honor of his birthday the city of Perm was renamed Molotov. His name was given to collective farms, plants and factories, and Molotov himself was honored with governmental awards.

On 22 June 1941 the Nazis attacked the USSR. Molotov called Germany’s aggression “unprecedented perfidy” and addressed his famous words to the Soviet people: “The enemy will be defeated. The victory will be ours.” On 12 July Molotov and English ambassador Richard Cripps signed a treaty on joint actions in the war against Germany. In October 1941, when employees of the USSR Foreign Ministry were evacuated, Molotov stayed in Moscow with Stalin. One of Molotov’s major concerns was to provide military deliveries from the United Kingdom and the U.S., and to ensure the Second Front. He was constantly engaged in tough negotiations.

As a diplomat, and not a military man, Molotov did not take part in troop operations. However, he was responsible for tank manufacturing. Molotov signed the governmental order, according to which special bottles containing ignition agents were produced. They were used against tank attacks and were given the unofficial name of “Molotov’s cocktail.” 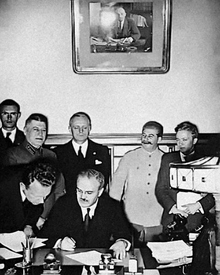 Vyacheslav Molotov played an important role in all the international conferences that influenced the post-war peace settlement, including those in Teheran, Yalta and Potsdam. He also participated in the San Francisco conference dedicated to the United Nations foundation.

At the end of 1948 Molotov’s wife, Polina Zhemchuzhnaya, was arrested and exiled. Vyacheslav Molotov had married her in 1921 and they had daughter, Svetlana. According to Molotov’s contemporaries, Molotov loved his wife deeply and her arrest was a great tragedy for him. Polina Zhemchuzhnaya was allowed to return from exile only after Stalin’s death in 1953.

In 1949 Molotov was removed from his position as Foreign Minister. He still attended international conferences and took part in diplomatic events, but it was obvious that he was no longer in Stalin’s favor. Probably, the Soviet leader wanted to get rid of his old associates and form “new guards.”

After Stalin’s death Vyacheslav Molotov was re-appointed Foreign Minister. He supported Nikita Khrushchev in his struggle for power against Beria, but Molotov couldn’t find a mutual understanding with the new leader and once again lost his position as Foreign Minister. In 1957 he headed a group against Khrushchev. When the group’s “anti-Soviet activities” were discovered, Vyacheslav Molotov was removed from all governmental positions. He was appointed ambassador to Mongolia and left the USSR. In 1961 Molotov returned to Moscow and was expelled from the Communist Party. On 12 September 1963 he retired. He continued to lead an active life and persistently tried to rejoin the Communist Party. However, he achieved his goal only in 1984.

At the end of his life Molotov admitted he was happy in old age and hoped to reach 100. But it never happened: Vyacheslav Molotov died on 7 November 1986 at the age of 96. He is buried at the Novodevichie Cemetery in Moscow.