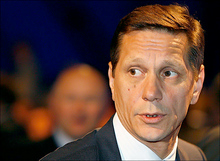 Aleksandr Zhukov is the current vice Prime Minister of the Russian Federation.

Aleksandr Zhukov was born in Moscow. His father, Dmitry Zhukov, was a well-known historical writer, literary theorist and translator. When Aleksandr was a child, his parents got divorced, and he was brought up by his grandparents.

His mathematical skills helped him to finish a specialized secondary school for mathematics and physics and later to graduate from the Economics Department of the Lomonosov Moscow State University with a degree in Economics and Mathematics in 1978. Subsequently he studied higher economics at the USSR State Planning Committee. 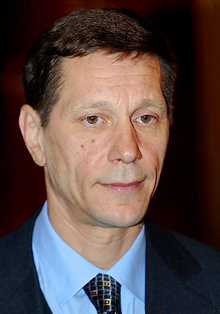 According to Zhukov’s former classmates, he didn’t participate in communist activities at university. He studied well, but never showed great zeal for career-making. Although a future politician, he preferred to use his mathematical skills in hobbies like chess and poker. Possibly, playing chess helped him develop his ability in political strategy building and the careful planning of every next step of a game.

Apart from his first two degrees, in 1991 Aleksandr also obtained a Harvard University Diploma and became a specialist in the field of currency, fiscal and customs legislation.

From 1978 he worked at the All-Union Research Institute of Systemic Research of the USSR Academy of Sciences, but science was not really his favorite activity. By this time Aleksandr was already married to a beautiful woman named Ekaterina. There were rumors that Ekaterina’s influential relatives helped her husband start a career in the Ministry of Finance – from 1980 to 1991 he was an employee of the Head Currency and Economics Directorate of the Soviet Ministry of Finance. Zhukov’s professional skills lead him to the post of Deputy Chief of the Currency Department of the USSR Ministry of Finance.

It was an unbelievable achievement for a 30-year old, especially in the Soviet Union.

From 1986 to 1989 Zhukov was Deputy to the Baumansky District Council of People’s Deputies (a local government body of the Moscow District of Baumanka).

Zhukov became a well-known political figure only after he was elected to the State Duma. As some correspondents joked, “he entered the Duma driving a tractor.” Certainly, agricultural machinery played an important role in his career. From 1991 to 1993 Zhukov was a vice president of the foreign economic JSC AvtoTractorExport, and it was during this time that he became acquainted with Mikhail Fradkov, a future prime minister. Because of this old connection some people still consider Zhukov to be aligned to Fradkov.

He ran for State Duma elections with the slogan “I have earned enough, and I am not going to the Duma in order to steal.” Ekaterina, his wife, was in charge of his election campaign. She liked to comment that her husband “has charisma.” And charisma is definitely a characteristic of this politician.

For more than 10 years, from 1993-2004, Zhukov was a Deputy of the State Duma of the Russian Federation, with four convocations, working in the Committee on Budget, Taxes, Banks and Finance. 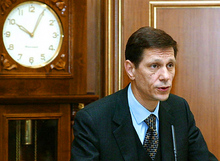 At the moment Aleksandr Zhukov is a Vice Prime Minister of the Russian Federation; he has held this post since 2004. Initially, in Mikhail Fradkov’s government, he was the only vice prime minister, in charge of all economic issues in the Cabinet of Ministers. At present, in the government of Vladimir Putin, Zhukov is one of six vice prime ministers, and coordinates the realization of the National Priority Projects, having inherited this duty from Dmitry Medvedev, who became President of the Russian Federation in 2008. The National Priority Projects of the Russian Federation is a program of the Russian government, started in 2005 and aimed at developing social welfare in Russia by the additional state funding of four selected projects, focusing on public health, education, housing and agriculture. Aleksandr Zhukov is responsible for all of these spheres with the exception of agriculture.

For his fruitful legislative activity, in the year 2001 Zhukov was personally cited by the President of Russia, and in 2003, per a presidential decree he was awarded the Order of Honor. 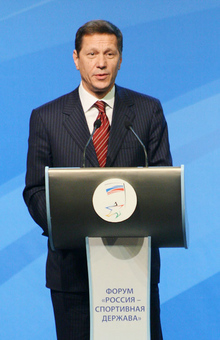 He was also put in charge of development of physical education and sports, including preparation for conducting the 22nd Winter Olympic Games in Sochi in 2014, and is the Chairman of the Supervisory Board of the 2014 12th Winter Olympic Games and 11th Paralympic Winter Games in Sochi. During the 119th session of the International Olympic Committee in 2007 in Guatemala City, there was a choice between three host cities. A group of Russian politicians and sportsmen represented Sochi, Aleksandr Zhukov among them.

All members of the Sochi delegation shared their emotional opinions about the Olympic Games. “At Olympiad-80 I personally mixed concrete for building a stadium,” Zhukov confessed in Guatemala.

The Vice Prime Minister is definitely not just a theorist in sports. He likes playing football, and was one of the founders, and a midfielder, of the united football team of the Russian State Duma. Zhukov sometimes performs as a media and TV football commentator. His other favorite sport is hockey.

Aleksandr Zhukov is a member of the scientific-editorial board of the Great Russian Encyclopedia. He is a master of sports in chess, and President of the Russian Chess Federation since 2003.

His wife is involved in charity, helping children’s homes in the Moscow region. Their only son, Peter, an economist born in 1982, was jailed for attacking a fellow investment banker in a drunken brawl at a party in London in 2007. Apparently, this scandalous event didn’t influence his father’s political career.

According to the initiative of Russian President Medvedev that requires state officials and members of their families to provide detailed declarations of income, in spring 2009 Zhukov gave information about his income and real estate property. This data states that during 2008 the Vice Prime Minister’s earnings equaled 3.4 million roubles (about 110 000 US dollars), whereas his wife earned about 116 thousand roubles (or 3 700 US dollars).

Almost all political experts expect Aleksandr Zhukov to remain on the chess board of Russian politics for a long time. Whichever role he will play in the game, he is certainly experienced enough to deal with political checkmates.