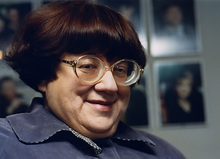 Valeria Novodvorskaya was born in Baranovichi City, in the Belorussian Soviet Republic (currently Belarus). In 1968 she finished secondary school and then studied at the Moscow Institute of Foreign Languages, specializing in French language, teaching and translation. At the age of 19, Novodvorskaya organized an underground students group, which, among other subjects, discussed the necessity to overthrow the communist regime with the help of an armed uprising. In December 1969 she was arrested by

the KGB on a charge of anti-soviet agitation and the distribution of leaflets criticizing the introduction of Soviet troops into Czechoslovakia. Novodvorskaya was not convicted, but instead in 1970 she was forced to undergo two years of medical treatment in a hospital for mentally ill 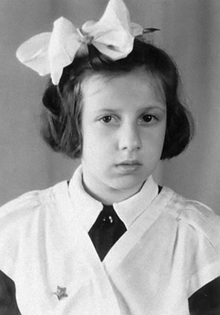 people, having received a diagnosis of “schizophrenia and paranoid personality development.” As Novodvorskaya later mentioned in her book “Beyond Despair,” her life in the hospital was a tough trial, due to the difficulties of interaction with mentally ill patients.

In 1972 Valeria Novodvorskaya participated in the copying and distribution of underground press. From 1973 to 1975 she worked as a teacher in a health resort for children. After that, up to 1990, Novodvorskaya was a medical translator at the Second Moscow Medical Institute. During the entire period she continued her political activities.

In 1977-1978 Valeria Novodvorskaya made an attempt to organize an underground political party that would fight against Soviet power. She was also one of the founders of the Free Inter-Professional Union of Workers, which was one of the first attempts at forming an independent trade union in the USSR. The organization aimed at asserting the rights of workers, which had previously been limited by the Soviet system. Evidently, many members of the union soon lost their jobs and were arrested. Novodvorskaya, particularly, was continually persecuted by the authorities: she was put into mental hospitals, was systematically interrogated and her flat was repeatedly checked.

From 1987-1991 Novodvorskaya was an organizer of unauthorized meetings and demonstrations in Moscow and as a result she was arrested by the police a total of 17 times. In 1988 Valeria Novodvorskaya took part in founding the Democratic Union Party and regularly expressed her political views in the underground newspaper Svobodnoye Slovo (Free Word). A few years later the publishing arm of Svobodnoye Slovo issued Novodvorskaya’s collection of articles.

In 1990 the same newspaper published Novodvorskaya’s article entitled “Heil, Gorbachev!” During the same year she spoke at different meetings and, as a sign of protest, tore Mikhail Gorbachev’s portraits to pieces. After all these actions Valeria Novodvorskaya was charged with public insult of the honor and dignity of the USSR President and offending the national flag. Several criminal cases were opened against the politician, but were soon closed due to a lack of substantial evidence.

In 1992, after the collapse of the USSR, Georgian President Zviad Gamsakhurdia allocated Novodvorskaya Georgian citizenship and appointed her as his Human Rights Advisor. By the end of that same year Valeria Novodvorskaya, together with other members of the Democratic Union, 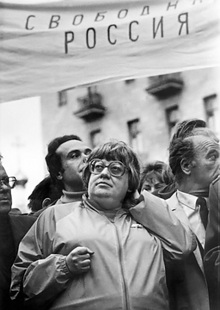 formed the Democratic Union of Russia. During the Constitutional crisis in Russia in 1992-1993, when Russian President Boris Yeltsin dissolved the Supreme Soviet (parliament) of the Russian Federation, Novodvorskaya was one of those who promptly supported this action.

Throughout 1994-1995 new criminal cases against Novodvorskaya were opened following publications of her articles in the newspaper Novy Vzglyad (New View). In particular, she was accused of “propaganda of the civil war and fomentation of ethnic dissention.” The cases were soon closed, though in 1996 some were sent for additional investigation.

At present Valeria Novodvorskaya lives in Moscow and is engaged in journalism and education, giving lectures on history, artistic ideology and religious studies. She is the author of a number of books and lectures. Novodvorskaya is known for her controversial statements and acute observations concerning both Russian and world politics. Her name is associated with sharp criticism of the USSR and current Russia. As Valeria Novodvorskaya once said, “Besides August 1991 and October 1993, I have never seen a reason to be proud of my country. I have only blushed and felt ashamed of it.”

Novodvorskaya’s scandalous statements keep stirring up the public’s opinion. Her most recited 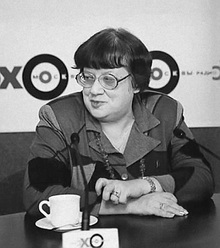 quotes usually shock by their striking sharpness, though they are usually followed by the author’s detailed explanations

justifying her position regarding each subject. For example, in a 1993 article Novodvorskaya said, “I am not terrified about what happened in Hiroshima and Nagasaki… Just look how Japan turned into a candy.” In the same article there appeared the statement “human rights are not for everyone,

but only for decent people” (meaning, not for people like Ruhollah Khomeini or Kim II-sung). She also mentioned her regret about the abolition of apartheid in the Republic of South Africa, claiming, “Apartheid is a normal thing.” In 2007 Novodvorskaya’s opinion regarding American military policy was published. “If the USA attacked Russia, that would be good for us. It would be better for Russia to be a state of the USA,” she said.

Valeria Novodvorskaya regularly publishes her assessment of the world’s main political news in her blog on LiveJournal, which, due to the outspoken nature and sharpness of her opinions, is very popular among readers.

Valeria Novodvorskaya is fluent in English and French and can read German, Latin, Ancient Greek and Italian.