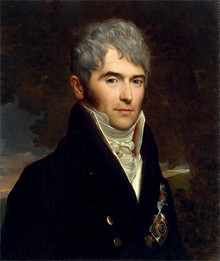 Prince Viktor Kochubey was a famous statesman, the Russian Minister of Foreign Affairs, and Imperial Chancellor. He is listed among the 129 greatest people in the history of Russia portrayed on a monument, which was erected in 1862 to commemorate the 1000th Anniversary of Russia.

Prince Viktor came from the very famous family of Kochubey, whose were descended from the Golden Horde. They adopted Christianity and were granted noble titles for their service to the Russian Tsars. The most famous predecessor of Prince Viktor was his great grandfather Vasily Kochubey, Ukrainian nobleman and Chief Judge.

Prince Kochubey’s life and career followed the glorious pattern of his ancestors. He was a protégé of his uncle Aleksandr Bezborodko, who was a renowned statesman of Catherine the Great.  Bezborodko never married and had only one daughter, so he took young Viktor as a son and prepared him for diplomatic service, his connections ensuring bright appointments and a cloudless career for his nephew.

Bezborodko sent Kochubey to study at universities in Geneva, Uppsala, and London. When Kochubey was only 18, he was already sent to Stockholm as part of the diplomatic mission there, and later to London. Spending so much time away from Russia, Kochubey devoted great effort to completing his education.  By 1792 he was able to find favor with Catherine the Great, her favorite Platon Zubov, Prince Paul, and Prince Alexander.

Soon, thanks to his uncle’s efforts, Kochubey was appointed Ambassador to Turkey at the age of 24. As a diplomat, Kochubey tried to elevate the value of Russia and make all nations strive for its friendship. His policy in Turkey was highly appreciated in St. Petersburg, and as result he was admitted to the Foreign Affairs Collegium, where he worked side by side with his uncle.

When Paul I succeeded Catherine the Great on the throne, Kochubey was granted the title of a count.  However, his uncle died soon after, and with his death ended the cloudless career of his nephew.  He lost the favor of Paul I and had to resign from his post in 1799.  He then moved to live abroad.

Era of Alexander I and Minister of Foreign Affairs

Two years later Paul I was assassinated and his 23-year-old son, Alexander I, succeeded him on the throne in 1801.  Kochubey was offered the post of Russian Ambassador in France, but refused it, because he wanted to live and work in Russia.  He returned to St. Petersburg and became a member of the closest circle of Emperor Alexander I - he took part in the meetings of the Private Committee, which determined the state politics and liberal reforms of Alexander I.

The vast reforms replaced the outdated, undefined jurisdictions of the Collegia with Ministries, and Kochubey was appointed the first Minister of Foreign Affairs of the Russian Empire.  According to the memoirs of his contemporaries, Kochubey was the most cautious and sensible member of the group, never making drastic moves and supporting only mild reforms.  Kochubey always thought that Russia’s foreign policy should first of all profit Russia and not be based on its bias towards any particular country.

Alexander I was known for his extremely liberal views, and was preparing to introduce a Parliament and a State Council as legislative and executive bodies, however, the Napoleonic wars put a halt to those plans.

In 1812, when Russia was at war with Napoleon, Kochubey was made the head of the Central Committee, which oversaw the joint forces of Russia, Prussia and all German counts against the French army.  Despite his liberalism, Alexander I was suspicious and did not fully trust his subordinates.  Kochubey was no exception – at some point he fell out of the Emperor’s favor and was distanced from him.

In 1819 Kochubey was made head of the Interior Ministry, which was joined with the Ministry of Police.  He placed high hopes on this post, planning to accomplish a wide range of administrative reforms.  He would not achieve them, though. 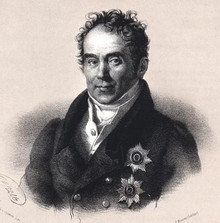 Despite Kochubey’s cautiousness and diplomacy, his views were very different from those of Alexander’s regarding both home and foreign policies.  Besides that, he was not able to recover the trust of the Emperor, which he had lost.  In reality Kochubey simply held a high post, but was not able to exercise his powers.  The crafty game played by his rivals forced Kochubey to resign from his post in 1923.

Under Nicholas I – Imperial Chancellor

However, Kochubey was yet to serve under another Emperor.  As Nicholas I took the throne after the sudden death of his brother, Kochubey was appointed head of the State Council and the Committee of the Ministers. He found himself at the top of the administrative ladder with his old plans unrealized, but this time he elected to steer a cautious course, saving face among his peers and displaying only a shadow of the ambition he once had.

Kochubey was deeply distressed by the situation of the Russian peasantry enslaved by serfdom; he thought it to be one of the greatest evils of his time and country.  However, he was afraid of practical moves, and never pushed the reforms he had in mind for fear of displeasing the Tsars, their courts, and counselors.  Instead, he plunged further into the neutral area of home affairs, even though he understood well that no lasting change was possible without preliminary wide administrative, social, and even political reforms.

Falling in and out of favor, Kochubey still lasted through 4 Russian Emperors.  He was a man admired by his contemporaries not only for his position, but for his character.  Having spent significant time in Europe, Kochubey looked European, thought in European terms, and had European manners.  According to those who knew him, he was very good-looking and commanded respect at first sight.

However, he had his weaknesses, too – such as a thirst for promotions and rewards, especially of the monetary kind, which he needed to be able to afford an extravagant lifestyle and a large family.  He married Maria Vasilchikova, the daughter of Tsar’s chamberlain and had five children with her.

Kochubey was awarded the title of Prince in 1831, and in 1834, a month and a half before his death he was made Imperial Chancellor of Internal Affairs.  His figure is among the 129 greatest people in the history of Russia, portrayed on a monument in Velikiy Novgorod, which was erected in 1862 to commemorate the 1000th Anniversary of Russia.