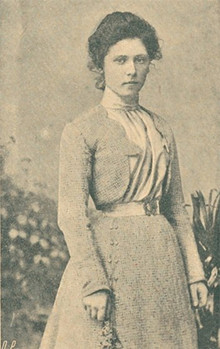 Maria Spiridonova was a prominent revolutionary and political figure who helped bring about the Bolshevik Revolution of 1917, but was later persecuted for her opposition to some aspects of Bolshevik ideology.

The heart of the revolution

Maria Spiridonova was born on October 28, 1884 in the city of Tambov into the family of collegiate secretary Aleksandr Spiridonov. Maria grew up a romantic-minded young girl, brought up on the traditions of Russian literature, with its tales sympathetic to the insulted and humiliated. This literature and upbringing largely determined the course of her life as she dedicated herself to the cause of the Bolsheviks.

In the beginning of the 20th century it was clear that the ruling power in Russia was facing a stalemate. There were several opposition movements and parties fighting against the autocracy. While the Mensheviks and the SR (Socialist Revolutionaries) thought Russia wasn’t quite ready for a full-out Revolution and supported the temporary Provisional Government, the Bolsheviks fought to bring on a fundamental revolution that would land all power in the hands of the people (or as they called them, the Soviets).

When Maria turned 16 years old, she secretly joined the Tambov unit of the Socialist Revolutionary Party (SR). Spiridonova was first arrested for participating in an anti-Czarist demonstration which took place on March 24, 1905, but was soon released by the police on absence of charges. However, her arrest failed to stop her from further revolutionary activity, only reinforcing her conviction to fight “the hated regime." 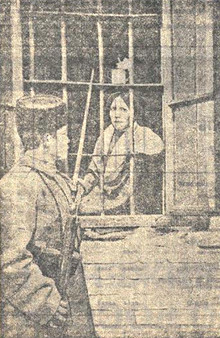 After her arrest, Spiridonova took her revolutionary convictions to new heights by planning the assassination of Police Inspector General Gavril Luzhenovsky. Luzhenovsky was known for being the mastermind behind the violent suppression of a large peasant uprising the year before, making him a particularly hated figure among the revolutionaries. On January 16th 1906, Spiridonova confronted Luznenovsky on a railway platform in Borisoglebsk with a revolver, and proceeded to shoot the Inspector General as many as five times at point blank range, with some reports claiming she discharged one round directly into Luzhenovsky’s face.  She was immediately arrested and deported to the city of Tambov, where Maria was subjected to horrendous physical abuse at the hands of the soldiers. They dragged her face down along cobbled stone roads and steps, stripped her and beat her relentlessly and excessively.

The Moscow Military Court examined her case on March 11, 1906 in Tambov during a closed session. While making a speech in court, Maria’s lawyer Nikolay Teslenko, said the following, "It is not just the humiliated and sick Maria Spiridonova standing in front of you; it is the humiliated and sick country of Russia itself... this entire country shudders with pain and horror. Someday we must put an end to this animosity. Come out from your deliberation with an olive branch, not with a raised sword."

Despite Spiridonova’s immense popularity, the court had no olive branch to extend – Maria was sentenced to death by hanging. She was kept waiting for 16 days while the sentence was approved. Ironically she considered these days to be “the brightest and the happiest” in her life. She wrote, “My death appears to me so socially valuable that any favor from the monarchy, such as exile, would be humiliation..."  So when Spiridonova was informed the death penalty had been commuted in favor of a lifetime in exile, she felt disappointed.

The prison regulations where Spiridonova was held were rather relaxed, and prisoners were able to receive newspapers and books. There were two unsuccessful attempts to rescue her from prison. Her release came with the February Revolution of 1917. On March 3, 1917, according to the order of the Ministry of Justice, all political prisoners were released.

Terrorist for the revolution

After her release, Maria Spiridonova was plunged into a political struggle and started to actively participate in the Left Socialist-Revolutionary opposition, becoming an ardent political opponent to the Bolsheviks. She thought the Bolshevik’s ideology was based on hate and wouldn’t get very far in the long run.

However, Maria didn’t deny the usefulness of terror as a tool to accomplish certain goals. She assisted in the assassination of Germany's ambassador Wilhelm von Mirbach-Harff. "I plotted Mirbach’s assassination from the beginning to the end," Maria Spiridonova confessed later. The assassination was an attempt by the SR party to provoke a war with Germany, however it merely accomplished the separation of the Socialist Revolutionaries from their Bolshevik allies.

Fighting against the Bolsheviks 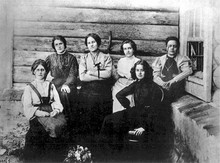 Spiridonova with other female revolutionaries

Spiridonova instigated a revolt against the Bolsheviks in July 1918. This riot was nevertheless suppressed and the leaders arrested. This time she ended up in prison under the Bolsheviks, who just a few years before had been her brothers in arms. She was released a year later, however the previous imprisonments had taken their toll on Spiridonova’s mental health - the authorities declared Spiridonova "hysterical" and placed her in the Kremlin hospital from which she eventually escaped.

However, her freedom was short lived. In 1920, Spiridonova was arrested again by the Bolsheviks – this time she was taken from her bed while sick with typhus. She was kept in the prison hospital, but later was transferred to a mental institution where Maria went on a hunger strike. At the time, an International Women’s Congress was taking place in Moscow. Spiridonova was still quite a popular female figure, and the Congress interceded on her behalf and asked Trotsky to allow Spiridonova to leave Russia – a request denied by the Bolsheviks, whose decision was motivated by the fact that she was still a danger to Soviet power.

Ironically, this made Spiridonova even more popular, leading to her becoming one of the most popular women of her time. A special committee in Paris published postcards with her portrait in an attempt to make it possible for Maria to move to France and Germany while Spiridonova was sent into exile to Samarkand. 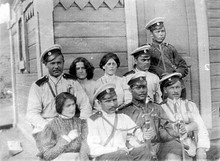 Maria Shkolnik (first raw), Revekka Fialka and Maria Spiridonova with convoy on their way to Akatuy for hard labour

The last blow to the aging woman came in 1937, when the country was hit the hardest by Stalin’s repressions. She was sent to prison in Ufa, where the guards treated her as harshly as the Czarist police a few decades earlier. There are rumors she fought back against her investigators, telling them that when they were born, she was already fighting in the revolution.

However, her words were ridiculous to the callous guards of the new generation. No one was interested in her previous merits, and her age did not persuade anyone to grant her leniency. The heavy axe of terror which Spiridonova helped to launch finally reached those who had set it in motion.

Spiridonova was executed in September of 1941 in Oryol, when the Nazis were about to enter the city. Murdered with no proper court sentence, simply on charges of being an enemy of Soviet power, she was another child of the revolution consumed by the regime they helped to bring about.

Maria Spiridonova was officially exonerated of all charges in 1992.