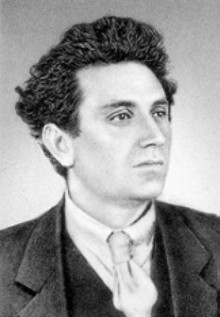 Grigory Zinovyev was a Bolshevik Soviet leader and a close associate to Lenin; he was executed by Stalin during the height of the struggle for key posts in the Communist Party leadership.

Grigory Zinovyev was born in 1883 into a Jewish family who owned a large dairy farm. Despite significant income from the farm, it was still necessary for everyone in the family, including the children, to earn money.  At 14, Zinovyev was already making an income by tutoring junior school students. The work kept him so busy, he had little time left for his studies.

His level of literacy was high enough to earn a clerkship in his native town of Elizavetgrad, in the modern Ukraine.

“As a person, Zinovyev is an extremely humane man, a good person, highly intelligent, but he is literally ashamed of these qualities and is sometimes over-ready to buckle on the armor of revolutionary hardness,” said Anatoly Lunacharsky,  first Soviet People’s Commissar of Enlightenment, who was responsible for culture and education.

At the age of 18, Zinovyev joined a group attempting to organize the labor movementl; at the time, the Imperial secret service was cracking down on illegal labor movements. He was caught by secret police in 1901, and fled the country the next year. Zinovyev became acquainted with Georgy Plekhanov (a founder of the Social-Democratic movement in Russia and one of the first Russian Marxists) and Vladimir Lenin in 1903.

The meeting proved to be crucial to the course of his life. He became a member of the Russian Social-Democratic Labor Party (RSDLP). In subsequent years, Zinovyev began actively working for the RSDLP. Nevertheless, he was still trying to study at the University of Berne, but the first Russian Revolution of 1905-1907 changed his plans. 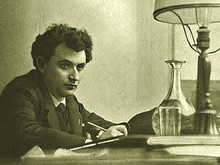 In the autumn of 1905, Zinovyev became an active member of a St. Petersburg Bolshevik organization. Soon after, he was forced to again go abroad again to receive medical treatment, due to the increasing number of heart attacks he suffered. In March 1906, Grigory returned to St. Petersburg and was elected a member of the St. Petersburg Committee – a Bolshevik stronghold.

In the spring of 1908, he was arrested by the secret police. His heart disease continued to deteriorate in prison. His lawyers used this to his advantage, and Zinovyev was released from jail. He was put under police supervision, but received a legal permit to leave the country by the end of the summer of 1908.

In Geneva, Zinovyev eventually became one of the closest associates of Lenin, who lived there at the time. He joined the editorial board of the Bolshevik newspaper ‘Proletariat.’ He published his first article in the paper in 1909, titled ‘Lessons of the class struggle,’ about striking workers in Sweden. Lenin was highly fond of the piece.

From these close ties with Lenin, Zinovyev soon became a significant figure in the Bolshevik Party. He was one of the main participants of the 1912 Bolshevik conference in Prague.

“Zinovyev has always acted as Lenin's faithful henchman and has followed him everywhere. We knew that Zinovyev was an excellent Party worker, but we knew little of him as a political thinker and we too often used to say of him that he followed Lenin as the thread follows a needle,” Anatoly Lunacharsky said.

During World War I, Zinovyev remained in Europe.  A joint brochure by Zinovyev and Lenin was issued in 1915 by Geneva publishing house ‘Social Democrat.’ The pamphlet was titled ‘Socialism and war.’ Around the same time, Zinovyev also independently published a number articles. 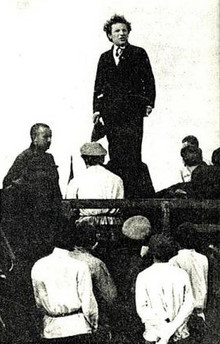 The February revolution of 1917 came unexpectedly for Zinovyev, as well as for Lenin and many other Bolsheviks. In March 1917, Zinovyev returned to Russia together with Lenin. In some days after returning to Petrograd, Zinovyev was elected head of the city Bolshevik organization, per Lenin’s offer.

Later, Zinovyev nearly fell out of favor with Lenin over his opposition to the Bolshevik revolution in October. On October 10, at a session of the Central Committee of the RSDLP, Grigory Zinovyev openly voted alongside Lev Kamenev against Lenin’s resolution, which called for the preparation for an armed revolt within the next few days.

After the resolution was finally passed on October 20, the party’s Central Committee considered Lenin's request to expel Zinovyev and Kamnev from the party. It was decided instead to prohibit both from making public appearances.  Lenin called Zinovyev and Kamenev "traitors to the revolution.”

But the "traitors" were very soon forgiven. After the coup, Zinovyev soon returned to the fold and was once again elected to the Central Committee at the Seventh Party Congress on March 8, 1918. He was put in charge of Petrograd, and the city’s regional government.  Zinovyev then took an active hand in the subsequent ‘Red Terror’ purges.

There was no other city in Soviet Russia where the Red Terror was so widespread than in Petrograd. Zinovyev was one of the first to execute people simply for belonging to the wrong class. Repression in Petrograd was significantly greater than under Felix Dzerzhinsky's rule in Moscow. (Dzerzhinsky was a Communist revolutionary, famous as the founder of the Bolshevik secret police, the Cheka.)

He became a non-voting member of the ruling Politburo when it was created after the Eighth Congress on March 25, 1919. He also became the Chairman of the Executive Committee of the Comintern (Communist International), after it was created in March 1919.

The moment was an important turning point in Zinovyev's career. For the next five years, it was Leon Trotsky and not Zinovyev who was second-in-command in the Bolshevik Party. Zinovyev, being an ambitious man, was not willing to accept his demotion, and from 1918 to 1925 did much to undermine Trotsky's position. 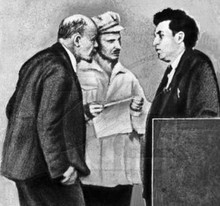 Grigory Zinovyev became one of the most powerful figures in the Soviet leadership. His influence was made manifest during Lenin's illness from 1922-1923, and immediately after Lenin’s death in January 1924. He delivered the Central Committee's reports to the Twelfth and Thirteenth Party Congresses in 1923 and 1924 respectively, something that only Lenin had previously done. He was also considered one of the Communist Party's leading theoreticians.

In his struggle against Trotsky, Zinovyev found allies in Lev Kamenev and Joseph Stalin. It was evident for Stalin, Zinovyev and Kamenev that they shared similar interests in their struggle for leadership of the Party.  They formed a triumvirate also known as the ‘troika.’

But the alliance was disbanded in 1925. At the Fourteenth Congress of the Party, Zinovyev (who considered himself to be the Party’s chief theoretician) opposed the Stalin, and was thus named the opposition (the so-called ‘new opposition’). Most members of the Party supported Stalin in his struggles against the former troika.

Stalin was gaining power. In the spring of 1926, Zinovyev and Kamenev allied with Leon Trotsky and formed an ‘incorporated opposition.’  The alliances in the ruling Party at that time were formed not according to political principles, only according to the balance of power.

In early 1926, Zinovyev was forced to leave his post as head of the St. Petersburg Communist Party. In July 1926, he was expelled from the Central Committee, and later from the Party. In December 1927, at Fifteenth Congress of the Communist Party, Zinovyev and other opposition heads had their memberships restored. But the reprieve was short lived: Zinovyev was expelled again in 1932, and began life in exile in Kaluga.

His membership was restored again in 1933, and he returned to Moscow. But Zinovyev’s fate was sealed, despite his giving a speech praising Stalin at the Seventeenth Congress in 1934. Zinovyev and Kamenev were once again expelled from the Communist Party, and arrested in December 1934.

Zinovyev before the execution, 1936 г.

In January 1935 they were forced to admit their "moral complicity" in Sergey Kirov's assassination. Kirov was a prominent early Bolshevik leader in the Soviet Union, who rose through the Communist Party’s ranks to become head of the Party organization in Leningrad. Kirov's death served as a pretext for Stalin's escalation of repression against dissident elements within the Party, culminating in the Great Purge of the late 1930s, in which many of the old Bolsheviks were arrested, expelled from the Party and executed. Zinovyev was sentenced to 10 years in prison.

In August 1936, Zinovyev and Kamenev were put on trial again.  They were accused of organizing a terrorist organization that assassinated Sergey Kirov, and attempted to kill Joseph Stalin and other Soviet leaders.

Zinovyev was found guilty on August 25, 1936. The Bureau of the Central Committee quickly issued an official announcement of his execution, a little more than a day after the verdict was made.

On June 13, 1988, during Perestroika, Grigory Zinovyev was formally absolved of the false charges.