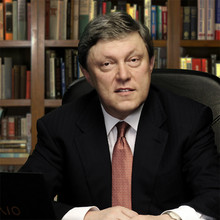 Grigory Yavlinsky is the leader of the Russian Democratic Party Yabloko ("Apple"). For a long time his name has been forgotten by the majority of Russians, as Yabloko has not been a part of the State Duma since 2003. After the elections in December 2011, Yabloko returned to the political stage.

Grigory Yavlinsky was born in Ukraine, in the city of Lvov. His mother Vera taught chemistry in high school, and his father Aleksey was the director of a labor colony for juvenile delinquents. According to Yavlinsky, his family was not poor, but buying a new toy or new clothes was a significant event.

After finishing the 9th grade, Yavlinsky decided live independently. His father disapproved of his choice, but did not stop him from making it. Grigory attended night school and went through several jobs, from a forwarder at the post office to an electrician at a glass factory before graduation. Afterwards, he left Ukraine and entered the Economic Department at the Plekhanov National Economic Institute in Moscow.

As a student Grigory participated in the publishing of an underground student newspaper named “Us”. It was dangerous: there was no freedom of speech in the USSR, and one could easily be arrested for such activities. Yavlinsky and his fellow publishers did not get caught, and years later, one of them even said it was a miracle. In his senior year, Yavlinsky married Elena Smotryaeva, and they are still happily married. 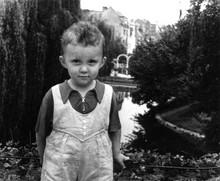 In 1976 Yavlinsky finished his postgraduate studies and was employed by the All-Soviet Union Coal Mines Department Research Institute. His job was to compose new unified work instructions for the coal industry, and he was the first in the USSR to accomplish this assignment. To perform his duties, he had to actually go down into the mines. One of his shifts nearly ended tragically for him: the mine collapsed. Together with four workers, he spent ten hours waist-deep in ice-cold water, waiting for help. Three of his fellow sufferers died in a hospital after having been rescued.

Yavlinsky spent four years at this job. For him, it was an opportunity to see the world hidden behind the propaganda posters. He reported about the horrible conditions in which the coal miners lived and worked, but his reports changed nothing.

In 1980, Yavlinsky was assigned to the USSR State Committee for Labor and Social Affairs as the head of the heavy industry sector. At this position, he began to develop a project aimed at improving the USSR labor system. In his work he pointed out two possible ways of making the system more efficient: establishing total control over every move of every worker in the country or, as an alternative, giving more independence to the enterprises. 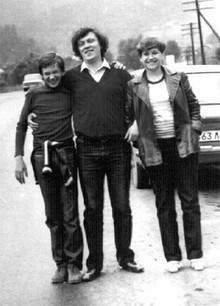 Grigory Yavlinsky with his wife and son, Mikhail during vacation in Carpathian Mountains. Summer 1985. (Photo from http://www.yavlinsky.ru)

But Yavlinksy’s work caused discomfort with the head of the State Committee for Labor, Yury Batalin. The KGB confiscated 600 draft copies of Yavlinsky’s project and interrogated the author several times. When Brezhnev died in 1982, the KGB got off Yavlinsky's back, but he still had to stop working: he was diagnosed with an active form of tuberculosis and sent to a closed medical facility for nine months. The drafts of his project were burned together with his other personal belongings as contagious. It is still not exactly clear if he was ill or if his diagnosis was faked by the secret services.

Yavlinsky changed positions several times within the country’s administration, and in 1990 became the vice-chairman of the USSR Council of Ministers. Together with his allies, he started to work at the 500 Days Program, a series of reforms necessary to introduce private property laws and the market economy into the Soviet Union as soon as possible.

President of the USSR Mikhail Gorbachev decided to combine Yavlinsky’s program with another one which had been developed simultaneously. This other program, “The Main Directives for Development", was created by the chairman of the Council of Ministers Nikolai Ryzhkov, who threatened to retire if his project would be rejected.

On October 17, 1990, Yavlinsky retired and founded the economical and political research institute Epicenter. In 1991, the new president of the USSR Boris Yeltsin made Yavlinsky return to the government to work and even thought about making him Prime Minister. But when Yeltsin signed the Belaya Vezha Accord, ending the Soviet Union and tearing up all the political and economic connections between the former Soviet republics, Yavlinsky left again as a sign of protest against Yeltsin’s actions. A year later, Yavlinsky started his own political career.

In 1993, Yeltsin dismissed the Supreme Soviet, the highest agency of state power in the USSR, and replaced it with the State Duma. This resulted in an armed uprising of the Supreme Soviet supporters in September - October 1993, which shocked Moscow. During the military actions, Yavlinsky appeared on TV and appealed to Yeltsin, asking him to suppress the rebellion. This speech boosted Yavlinsky's rating, and, after the revolt was crushed helped him to form a political party which got enough votes to be elected to the Duma. 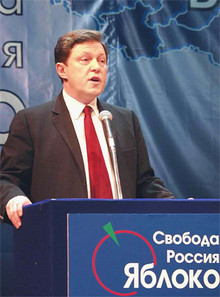 During the following ten years, however, his party, Yabloko, gradually lost its popularity and in 2003 was not re-elected to the Russian parliament.  In 2008, Yavlisnky resigned from the position of party chairman and turned to working as a teacher in the Economic High School in Moscow. However, in September 2011 he returned to his duties in the party.

On December 4, 2011 the State Duma and local legislative assembly elections took place in Russia. According to the public opinion polls, many people did not trust the ruling party United Russia and many citizens went to the voting stations with the intention to vote for any other party: the communists, the liberals, even for some parties they'd never even heard of. This voting strategy had been promoted by many activists over the Internet, and amidst other results helped the half-forgotten Yabloko party to return to the political scene and win some seats in the St. Petersburg legislative assembly.

United Russia won the elections, but there was too much evidence that pointed to an unfair victory. The observers working at polling stations all around the country reported several violations of the voting rules. Videos recorded during the voting showed dozens of cases of ballot-stuffing. Many citizens witnessed what are known as "carousels": groups of people moved from voting station to voting station on buses, voting at every stop using bought or fake documents.

All this was topped by a report in the local evening news in the city of Rostov, on December 5th: the speaker told about the United Russia's triumph in the Rostov district, standing in front of the diagram depicting the distribution of votes. According to it, United Russia won with 146% of the Rostov district electors participating in the elections. 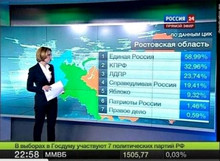 The resulting unrest swept the country. Waves of protest meetings flowed across Russia. Yabloko (supported by a considerable number of people) took part in them too, and Grigory Yavlinsky announced that he would run for president in the March 4 2012 presidential elections. To do this, he first had to collect a certain amount of signatures. He reached the required number, but was removed from the ballots anyway: it was necessary to send the originals signatures sheets to the Central Electoral Commission, but a quarter of Yavlinsky’s sheets were copies. It’s hard to tell whether it was some political move or just a mistake.

According to the information on its website, Yabloko’s party platform stands for a social market economy, fair competition in politics and the economy, for inviolability of private property, and for equal opportunity. The party supports different human rights and ecological organizations, and is the only party which openly speaks about women and LGBT rights in Russia. The motto of Yabloko is "For freedom and justice!"