Gennady Zyuganov is Russia’s unchallenged Communist Party leader and one of the country’s most recognized politicians. The closest he ever came to the presidency was in 1996 when he earned more than 40% of votes in the final round of public elections, losing to Boris Yeltsin.

Gennady Zyuganov was born in the village of Mymrino in the Oryol Region in Southern Russia on June 26, 1944. The village had been severely damaged during the Great Patriotic War and at the time only a few families remained. Gennady’s father was injured in the war and could barely walk, so Gennady learnt to work hard from a very early age to help the family and restore the village from ruins.

His parents were teachers at the local school – a family tradition for more than three centuries. So Gennady too became attached to the profession and to the establishments where he studied.

Gennady began his career working as a teacher at his school immediately after graduation; he was 17 at the time. It was then that he discovered the love of his life, Nadezhda – she was one of his students, two years his younger.

Zyuganov’s passion for science and outstanding sports talents helped him when he served in the elite Radiation, Chemical and Biological Intelligence Unit of the Group of Soviet Forces in Germany. Gennady jokes that it’s because of the gas mask that he had to wear for more than a year that he has little hair nowadays. His superior officers recommended him as candidate to join the Communist Party of the Soviet Union for his excellent performance and leadership skills. Zyuganov eventually reached the rank of Colonel.

In 1966 Zyuganov returned from the army, married Nadezhda and continued studying physics and mathematics at the Oryol State Pedagogical Institute. He was a socially active and popular student. He honed his leadership skills in the Communist Party, actively participating in its political and social activities; he was also captain of the university’s volleyball team and recreational club.

Upon graduation, Gennady taught higher mathematics at his university while doing post-grad studies. He also rose quickly through the ranks of the Communist Party, becoming second secretary of the Party in the Oryol Region, in charge of propaganda.

In 1980 Zyuganov moved to Moscow to complete his PhD at the Academy of Social Sciences. Within three years Gennady received the high post of instructor in charge of ideology and propaganda in the highest body of the Communist Party of the Soviet Union – the Central Committee. 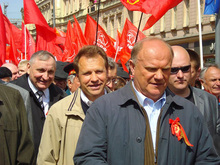 By the end of the 1980s Gennady Zyuganov had made a name for himself as one of the harshest critics of President Mikhail Gorbachev and his perestroika and glasnost policies. He criticized the liberal reforms that eventually led to the collapse of the Soviet Union and the end of Communist Party rule.

In the early 90s Gennady Zyuganov helped form the new Communist Party of the Russian Federation and became its chairman in 1993. He still occupies the post today. A critic of the government and Western ideals, Zyuganov ran for president three times, in the 1996, 2000 and 2008, each time coming in second. He also runs for country's Top Job in 2012 Presidential Election.

Today Zyuganov heads the International Union of Communist Parties of CIS Countries and the Baltic States. He is a Russian State Duma Deputy, leading the largest opposition party. Zyuganov focuses on social protection, calling for increased pensions, higher wages for the state sector and re-nationalization of the economy.

Gennady Zyuganov has two children, seven grandsons and one granddaughter.