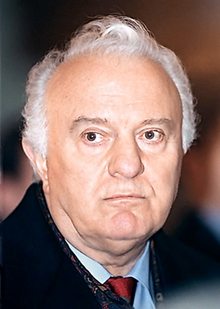 Eduard Shevardnadze was born in the village of Mamati, Lanchkhuti Region, in the Georgian Soviet Republic. His parents wanted him to become a doctor. Georgians traditionally respect their parents’ will, and young Shevardnadze finished the Tbilisi medical school. However, he never worked in medicine afterwards. In 1959 Eduard Shevardnadze graduated from the Kutaisi Teaching Institute.

Shevardnadze’s political activity began very early. In 1946 he joined the Communist Party and rose through party ranks to become the General Secretary of the Georgian Communist Party in 1972. In this post, he led a widely publicized campaign against the black market and corruption and dismissed a large number of high-ranking officials within a very short time. Unfortunately, Shevardnadze’s efforts did not solve the problems completely. Shevardnadze's hard line on corruption soon caught the attention of the Soviet hierarchy. He joined the Central Committee of the Soviet Communist Party in 1976 and in 1978 and was promoted to the rank of Candidate (non-voting) Member of the Politburo (the central policymaking and governing body of the Party).

Eduard Shevardnadze’s activities as the Minister of Foreign Affairs of the USSR (1985-1990) summoned a wave of contradictory opinions, both in the Soviet Union and abroad. His first move was a shake-up of the ministry’s personnel, replacing previous staff with people close to him. But it is his foreign policies that provoked the most

controversy. One of his decisions was to sign an agreement for the withdrawal of Soviet troops 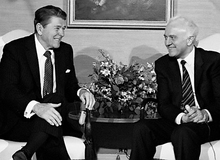 from Germany. Some experts believed that this could have brought 100 billion US dollars into the country, enough to resolve all of the USSR’s debts. Though Shevardnadze agreed to do it free of charge. Another step was a non-repayable handover of 50 thousands square kilometers of the Bering Sea shelf (along the so-called USA/USSR Maritime Boundary Agreement). Shevardnadze’s supporters considered him a key figure in the détente that marked the end of the Cold War, whereas his critics blamed him for causing a conscious weakening of his own country’s positions. During his five-year term as Minister of Foreign Affairs Eduard Shevardnadze’s hair turned grey and he was given the nick-name “Grey Fox” – a combination of a wisdom and cunning. 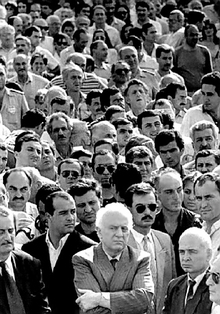 Eduard Shevardnadze supported Mikhail Gorbachev’s initiative in running a policy of “perestroika” (restructuring), “glasnost” (maximal publicity, openness, and transparency) and détente. But over a period of time the two politicians drifted apart; Gorbachev tended towards the preservation of the socialist government and unity of the Soviet Union, whereas Shevardnadze insisted on further political and economic liberalization. When, by the end of 1990s, the “hard-line” members of the Communist Party began strengthening their positions and jeopardizing reforms, Shevardnadze unexpectedly announced his resignation as Minister of Foreign Affairs “as a sign of protest against the forthcoming dictatorship.” That same year he left the Party. Shevardnadze returned briefly as the Minister of Foreign Affairs in November 1991, but resigned the following month when the Soviet Union was formally dissolved after signing the Belavezha Accords. He was one of the first politicians to recognize this agreement.

The fall of the USSR and the rise of new independent countries led to a characteristically chaotic situation in most post-soviet territories. Georgia was not an exception. Zviad Gamsakhurdia became the first president of the newly independent state of Georgia. He led the nationalist movement, having been previously imprisoned by Shevardnadze's government in the late

1970s. Within months of Gamsakhurdia assuming power there was a military coup, which literally stopped a civil war. Gamsakhurdia left the country. 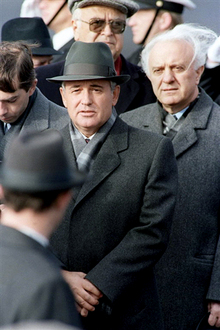 March 1992. When the Presidency was restored in November 1995, he was elected with 70% of the vote. This obvious victory was explained by the fact that Georgians, having overcome the threat of civil war, wanted a stable, non-nationalistic leader, who would establish peace in the country and strengthen its authority in the world. As the Head of State, Eduard Shevardnadze faced serious economic problems, a growing influence of the mafia and movements for independence from Abkhazia and South Ossetia.

There were three attempts upon the life of Shevardnadze. The first, in 1992, was in Abkhazia, when his helicopter nearly crashed as a result of the dangerous maneuvers of another unrecognized helicopter. Then in 1995 a car next to his vehicle exploded and in 1998 the president’s Mercedes was attacked by fire from a grenade gun. Eduard Shevardnadze’s opponents claimed that these assassination attempts were feigned so as to increase the president’s ratings.

In 2000 Shevardnadze was re-elected President, receiving 82% of the vote. This year

designated a deterioration of his popularity. By 2003 the external debt of Georgia amounted to 1.75 billion US dollars and the country was in no position to pay them off. A continuous financial crisis, mass unemployment and ineffective taxation aroused strong discontent among the population. Wide spread corruption and a rise in emigration along with numerous political-ethnical problems also considerably destabilized the country. 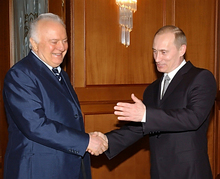 Shevardnadze was unable to secure the return of Abkhazia and South Ossetia, which proclaimed their independence. Georgia’s foreign policy was very complex and Shevardnadze tried to maintain a balance between the US and Russia, but this proved impossible. The relationship with Russian authorities was tense due to the war in Chechnya and the position of Abkhazia. Russia accused Georgia of concealing Chechen separatists and threatened to attack the terrorists on Georgian territory. Shevardnadze asked the US for military and economic aid, signed an agreement for a strategic partnership with NATO and allowed the construction of the Baku-Tbilisi-Ceyhan oil pipeline (which was important for the US).

In 2003 Eduard Shevardnadze was in a position of political isolation. The ruling block, Unity of Georgia’s Citizens, was falling apart; the opposition was represented by a coalition headed by Nino Burdzhanadze and Zurab Zhvania and at the movement was organized by 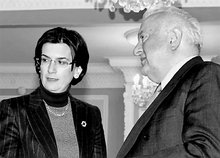 On 2 November 2003, Georgia held a parliamentary election that was widely denounced as unfair by international election observers and the opposition, which disagreed with the victory of the pro-government block. The alleged forgery of votes caused massive indignation among Georgians, who staged demonstrations in Tbilisi,

which later became known as the Rose Revolution. The opposition, with the support of military forces, occupied the parliament building. Two weeks later Eduard Shevardnadze announced his resignation.

Answering the question about where he would go, the ex-president said, “I am going home. I will 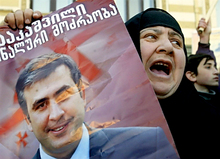 be writing memoirs.” Later he pointed out that he had a lot of army and police forces available, but wanted to avoid a bloody outcome. The result of the revolution was that power was transferred to the opposition, headed by Mikhail Saakashvili.

Eduard Shevardnadze was married in 1950. His wife passed away in 2004. He has two children.