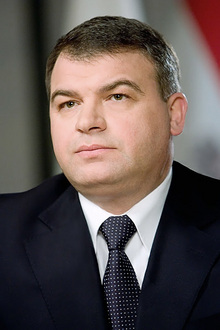 Anatoly Serdyukov was Defense Minister of the Russian Federation in February 15, 2007 - November 6, 2012.

Anatoly Serdyukov was born in the Kholm Abin Region in Krasnodar Region. In 1984 he graduated from the Leningrad Institute of Soviet Trade with a degree in economics and began working in a furniture shop as an assistant manager. Within the next ten years Serdyukov climbed the career ladder and became a commercial deputy director of the furniture company Lenmebeltorg, which was later renamed JSC Mebel-Market. In this new enterprise Anatoly Serdyukov changed a few administrative posts (1993-2000) and eventually became General Director.

In 2000 Serduykov presented a thesis and became a Candidate of Science in Economics (a scientific degree, corresponding to a Doctor of Philosophy). That same year he started to work in the sphere of taxes, which proved to be an important step towards his future career as a politician. Anatoly Serdyukov was appointed Deputy Head of the Inter-district Inspection Unit of the Tax Ministry (2000-2001), where he worked with large-scale taxpayers in Saint Petersburg. During that same period he graduated from the Law Department of Saint Petersburg State University. From 2001 to 2004 was promoted from Deputy Head of the St. Petersburg Tax Authority to Head of the same administrative body. Anatoly Serdyukov had a reputation for being a tough leader, often initiating the bankruptcy of individuals or companies in debt to the tax service.

Under the direction of Serdyukov an effective technology of export VAT refund was developed, which Serdyukov called “preventative measures against false export at early stages.” The main idea of this approach was that a firm was audited before the conclusion of a deal. Implementation of this technology increased tax collection abilities. In the first half of 2005 Serdyukov reported to the President of Russia about exceeding the target of tax collection by 10 billion US dollars. He co-authored a book, “Taxes and Taxation,” with two professors from Saint Petersburg University of Economics and Finance, which became a textbook for university students.

Serdyukov was one of the key figures in the case against Yukos Oil Company. In 2004 this large oil and gas provider, controlled by the billionaire Mikhail Khodorkovsky, was charged with tax evasion for over seven billion US dollars and accused of misusing tax havens inside Russia in the 1990s for reducing tax burdens. Its total amount of tax claims in 2000-2003 (including fines and penalties) amounted to 25 billion US dollars. In 2006 the company was declared bankrupt and in 2007 it was fully liquidated; Khodorkovsky, arrested a few years earlier, was sentenced to nine years in prison. The so-called “Yukos effect,” as reported by Serdyukov in 2005, got results; “practically all oil companies revised their tax figures and began paying quite large sums,” he said.

In February 2007 President Vladimir Putin appointed Anatoly Serdyukov Defense Minister of the Russian Federation, which raised a wave of surprise and comments. Evidently, he was the least expected candidate for this post. Some thought Serdyukov was a “strange” choice for Putin, whereas others said that “he was hired to end corruption and inefficiency” in the army.

Anatoly Serdyukov definitely started a new epoch in the military sphere, and became known for numerous profound changes and a tough style of work. His main priority became not the administration of troops or operational-strategic planning, but organizational and budgetary issues. In his first year in office, Serdyukov fired almost one-third of the top officers of the Central Military Administration. According to some resources, during his time as Defense Minister, Anatoly Serdyukov changed 70 percent of the Defense Ministry’s top cadre personnel, causing much disapproval and dissatisfaction among old staff. Several generals who disagreed with Serdyukov’s policy resigned (Baluevsky, Rukshin and Karpov). The Defense Minister also changed the military uniform, at a cost of about three million US dollars from the budget.

One of Serdyukov’s organizational reforms was to exclude knee-high boots and foot clothes from the list of obligatory elements of the military uniform. Interestingly, foot clothes were used in the Russian army from the 18th century, when they were introduced as an element of modernization by Peter the Great. Fitness standards for Russia’s generals and officers also became a concern for Serdyukov, who ordered a check on the physical condition of the entire service personnel and threatened to dismiss those who did not meet requirements. Apparently, the threat was not put into practice, but the check raised an issue.

In October 2008 the beginning of the Reform of the Armed Forces of the Russian Federation 2008-2012 was announced. It became one of the most discussed subjects across the country and abroad. There are several significant changes planned, among them - the transformation from a mass mobilization army into a small force of contract soldiers, and a liquidation of a large number of positions filled by generals, colonels and officers. At the moment there is one officer per 2.5 men. That will change to one officer per 15 men (similar to western armies). Is it expected that about 200 thousand people will lose their jobs.

The reform also aims to restructure the system of military medicine: it is planned to close a large number of military hospitals and polyclinics and to retain only 27% of military doctors. It was also announced that one-third of arms and equipment would be renovated over the next three to five years.

Anatoly Serdyukov’s reform has met with differing assessments, both in Russia and abroad. Some experts (together with initiators of these changes) believe that by 2012 the Armed Forces of the Russian Federation will become highly mobile, professional and well equipped. Whereas opponents state that this renovation will weaken the army, and disapprovingly call it “a surgery, performed without a council of physicians and diagnosis.”

In September 2007, as the son-in-law of Viktor Zubkov, who was appointed Prime Minister that same month, Serdyukov handed in his resignation to President Vladimir Putin. However, his resignation was not accepted.

In May 2008 Anatoly Serdyukov was reappointed Defense Minister under Vladimir Putin's Cabinet of Ministers.

“[The] resignation of Defense Minister Anatoly Serdyukov has been effected to ensure the objectivity of the investigation of the violations in the Defense Ministry,” Putin said.

The case was launched less than a month prior to the resignation. Two former Defense Ministry officials were the main suspects in a $100 million corruption case. Multiple cases of real estate fraud were reportedly committed by a commercial company controlled by the Russian Defense Ministry.

Serdyukov was Russia’s first civilian defense minister, and enacted extensive and unpopular reforms within the military. The Defense Ministry has traditionally been staffed by career military officers, bureaucrats who allegedly held Serdyukov in extremely low regard.