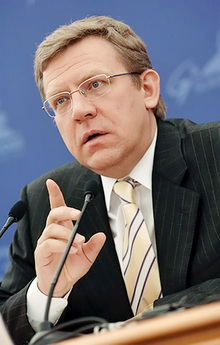 Aleksey Kudrin was the longest serving Minister of Finance in modern Russia - officially in charge of Russia's financial system in 2000-2011 - before his resignation in September 2011.

Born in Latvia into the family of a military officer, he moved to Leningrad (now St. Petersburg) to work as an auto mechanic in the Ministry of Defense Academy before perusing higher education.

He attended Leningrad State University and went on to conduct academic research there until 1988. His political career took off in 1990 in the Saint Petersburg Mayor's Office under Anatoly Sobchak. Here he met the future President of Russia, Vladimir Putin. In 1996 Kudrin moved to Moscow where he worked in President Yeltsin's administration.

He became Minister of Finance with Putin's presidency in 2000.

Kudrin is known as the financier of the St. Petersburg power team. He is also often referred to as the last liberal reformer in Vladimir Putin's cabinet since Mikhail Zurabov and German Gref, the ministers of Health and Social Development and of Economics and Trade, respectively, were dismissed in a reshuffle in September 2007.

Kudrin, Gref, and Zurabov all came under fire in early 2005 for economic reforms they tried to implement. Many of the reforms had to do with replacing free benefits, such as medical care and transportation, with cash benefits. 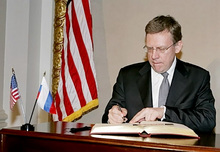 This replacement angered many among the elderly as transportation costs increased. Protests took place across Russia. The President reprimanded Kudrin on national television, and a few members of the State Duma went on a hunger strike for a short period of time. A no-confidence vote against Mikhail Fradkov's cabinet was called by the State Duma in early February, but it failed. Some analysts saw the whole affair as an attempt to either discredit or perhaps get rid of one of the three men by other members of the cabinet. However, this was never proven and Kudrin, Gref, and Zurabov all retained their jobs.

Since August 2007, Kudrin is also chairman of the largest Russian diamond production company, Alrosa. On 24 September 2007 Kudrin was promoted to the post of Deputy Prime Minister equal to Dmitry Medvedev and Sergey Ivanov.

Under Fradkov, Kudrin became one of the main ideologists behind Russia's financial “verticality of power" in which tax revenues are transferred from the regions to Moscow and then later redistributed.

With the world financial crisis Kudrin's policies again came under fire. His predictions of Russia becoming a safe heaven for investors failed to materialize and his increasingly alarmist rhetoric made many in the Kremlin uneasy.

In several interviews Kudrin warned the way out of the crisis wouldn't be easy. He also predicted a second wave of credit crisis because of overdue debts. "Russia will not have such favorable conditions for economic growth for another 10-15 years as it did in the last ten,” he said. In May 2009 President Medvedev warned officials who express pessimism towards the Russian economy to “hold their tongues” or look for another job.

The Communist Party demanded Kudrin’s resignation arguing that he was not fit for the job at the time of the crisis. 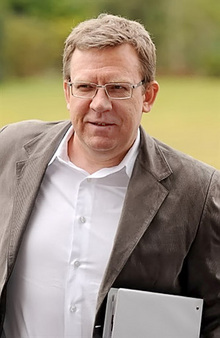 The latest controversy surrounding Kudrin surfaced in May 2009 when he refused a 500 million dollar loan to Belarus due to the nation’s lack of progress in stabilizing its economy. The Belarusian president responded with a fiery critique of Kudrin's judgment: "He completely consolidated with our morons who, paid with western money, are quaking and teaching us how to work." The Russian government did not respond to the statement.

In fall 2011 President Dmitry Medvedev signed Kudrin’s resignation, following strong differences in views between the two. Kudrin also had to leave all other post in governmental institutions he held as Minister - the Council for Financial Markets, National Banking Council, as well as other structures, including international, where Kudrin represented Russia.

Kudrin has a PhD in Economics. He is an honorary professor of St. Petersburg State University and the Higher School of Economics in Moscow. He is the author of over 15 academic works on competition and antimonopoly in the Soviet economy.

Aleksey Kudrin is married and has a son.