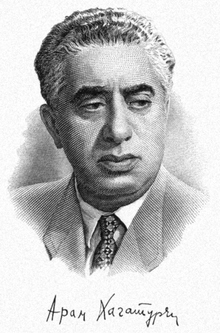 Aram Ilych Khachaturyan was an Armenian Soviet composer, conductor, pedagogue, a public and musical figure, a People’s Artiste of the USSR, the author of the music of the Armenian Soviet Republic’s anthem and overall one of the major musicians of the 20th century.

He was born in Tiflis (now Tbilisi) into the family of a bookbinder. He was brought up in the cosmopolitan musical atmosphere of Tiflis, which was the cultural capital of the pre-revolution South Caucasus. From his early years he ad-libbed music on the piano. When he was ten, he entered a commercial school. After learning to play wind instruments by himself, he participated in an amateur brass band. When he was 16, he went to an opera theater for the first time. There he heard the Georgian classic “Abesalom and Eteri,” which impressed him so much that his dream to learn to play music became an obsession. In 1921 Khachaturyan moved to Moscow with his brother, where he simultaneously entered the biological faculty of a university and the Gnessin State Musical College, despite his lack of even a basic musical education. His perfectly tuneful ear, musicality and excellent memory helped him succeed.

At first Khachaturyan learned to play the violoncello and the piano. But it soon became clear that his main vocation was composing. At Mikhail Gnessin College, he found an understanding teacher who helped him to quickly develop his natural talent. While at the college he wrote his first pieces, “Dance” for violin and piano, and “Poem” for piano, which later were successfully published.

From 1929 until 1934 Khachaturyan studied composing at the Moscow Conservatory, first under Gnessin, and later under the composer Nikolay Myaskovsky (often dubbed the “father of Soviet symphony”). During those days he dedicated his full attention to his art. He wrote the “Toccata” for piano, a trio for clarinet, violin and piano and his “Dancing Suite” for a symphonic orchestra. His popularity among the masses grew. As his graduation work he presented his first symphony dedicated to Soviet Armenia. He graduated with honors, and his name was put up on the honors board. Later he perfected his skills in his postgraduate studies.

After graduation, he worked mainly on his new compositions, turning to various genres. His music for dramatic performances and movies earned him the most acclaim. He also took part in the social music life of the country, doing important work for the Composers’ Union.

He spent the spring and summer of 1939 in Armenia, working on the ballet “Happiness” (“Schastye”). In the ballet genre, he incorporated the life of the Armenian people and the happiness they had earned with hard work and struggle. In 1940 he created one of his best-known works, a violin concert dedicated to the Russian virtuoso David Oystrakh, who first played it.

During World War II Khachaturyan created the songs “Captain Gastello” and “Praise Be to Our Motherland” (“Slava Otchizne”), a march for a brass orchestra named “To the Heroes of the Patriotic War” (“Geroyam Otechestvennoy Voyny”). He also created the ballet “Gayane,” which premiered in 1942 in Perm, where the Leningrad Opera and Ballet Theater had been evacuated. In 1943 the ballet earned him the Soviet State Prize, which he donated to the Soviet army. In 1944 he wrote the Armenian Soviet Republic’s anthem. 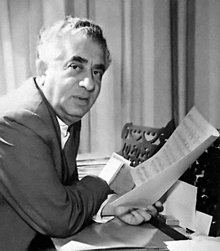 After the war, his musical exploits continued to widen in range. Starting from 1950 he taught composition at the Moscow Conservatory and the Gnessin College, paying attention to the creative development of young composers. In 1950 he also started conducting. His debut as a conductor came in Moscow with scenes from the ballet “Gayane” and a violin concert. He then performed in many Soviet cities and abroad.

But composition remained his life’s main obsession. His major post-war piece, the ballet “Spartak,” was finished in 1954 and first staged in 1956 at the Bolshoi Theater in Moscow. Khachaturyan felt attracted to the image of the man who had led an unequaled slave uprising, finding many parallels with contemporary peoples’ fights for independence.

Also in the post-war years, his social activity developed. He traveled around the world with other composers, performing and reading lectures and reports on Soviet music culture, which served to strengthen cultural ties between the Soviet Union and other countries. In 1963 he was elected to the Armenian Academy of Sciences, and became an honorary member of the Italian Santa Cecilia music academy, an honorary professor of the Mexican Conservatory and a corresponding member of the German Art Academy. He held the titles of professor and a Grand Ph.D. in art history. He was also awarded with the title of People’s Artiste of the Soviet Union.

Aram Khachaturyan’s musical work continued until his last days. He died in Moscow. His name was given to a Great Philharmonic Hall, a string quartet and a yearly contest of composers and piano players. There is a house museum of Aram Khachaturyan in Erevan. It was opened in 1982 in the house where his elder brother lived with his family and where the composer himself stayed when he visited Erevan. The museum holds letters, books, manuscripts, photographs, records and other items connected to Aram Khachaturyan’s life and creative work.