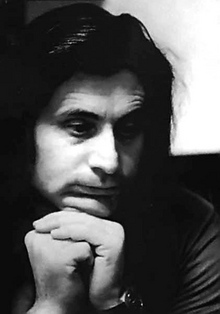 A renowned Russian composer, educator and music theoretician, Alfred Schnittke was one of the most remarkable musicians of the second part of the 20th century and the main representative of the “Soviet musical avant-garde” along with Edison Denisov and Sofia Gubaydulina.

The list of his works includes over 70 items (not taking into account early compositions), among them operas, ballets, symphonies and chamber and choral music.

Schnittke was among those composers whose music received international acclaim while he was still alive. Early on performances of his works became world-scale cultural events, involving the greatest conductors and orchestras of Europe and the United States.

Alfred Schnittke was born in Engels, in the Saratov Region, into a family of Russian Germans. His father, Garry Schnittke, emigrated from Germany to the Soviet Union in 1926 and worked as a translator. His mother Maria Fogel taught German at a local school. She was a Catholic, and later this might have influenced 48-year old Schnittke in his decision to adopt Catholicism. Alfred Schnittke recalled that German was the main spoken language at home. However, the great musician always considered Russian his true native language. 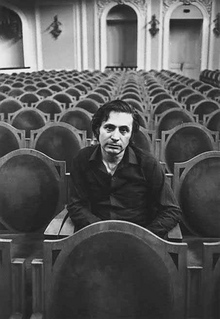 The first encounter of the future composer with the art of music occurred in 1946 in Vienna. His father was sent to work in Austria as a journalist and interpreter and he took his whole family - a wife, two sons and a daughter – with him. Alfred Schnittke attended numerous concerts, listened to Beethoven, Schubert and Bruckner and saw operas by Mozart, Leoncavallo, Mascagni and Wagner. When he was 12, his parents decided he should be given his first music lessons.

After the family returned to Moscow in 1948 Alfred auditioned for the October Revolution Music College and studied there from 1949 to 1953. He had to choose the choirmasters’ department, as he had had very little performance or musical training. Later Schnittke would become a teacher of music theory at the college, and in 1999, the college, which had already become an institute, would be named after him (Moscow State Institute of Music named after A.G. Schnittke). In 2000 the world’s first museum of Schnitke would open within its walls.

In 1950-1952 Schnittke started taking regular private lessons in music theory with Josif Ryzhkin and regular piano classes under Vassily Shaternikov, along with his fellow students Rodion Shchedrin and Karen Khachaturyan. .

In 1953 Schnittke gave exams at the Moscow Conservatory and in 1953-1958 studied composition with Evgeny Golubev and orchestration with Nikolay Rakov. His graduation piece, an oratorio entitled “Nagasaki,” was criticized by the Union of Soviet Composers for “modernism.” However, Dmitry Shostakovich wrote in support of “Nagasaki.” It was recorded for radio transmission abroad, but not within the USSR. 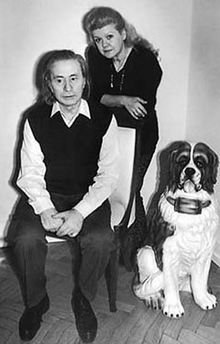 In February 1961 he married the pianist Irina Kataeva. She recalled that they beame acquainted in the early 1960s. Irina had come to Moscow from Leningrad (now Saint Petersburg) after 10 years of education in a music school at the Leningrad Conservatory. She had to continue studying and Schnittke, then a postgraduate student of the Moscow Conservatory, became her tutor. At that time Alf, as his friends used to call him, was already married to Galina Koltsina, a musicologist and fellow student at the Moscow Conservatory. However, very soon he said he could not teach Irina Kataeva anymore, because she had become more than just a student to him. Young Irina did not want to marry. So, they had rendezvous for several months, but then she put an end to it. Alfred, according to Irina, took offence and disappeared, but in half a year they met again. She was studying at the Gnesin Institute of Musical Art and phoned him to ask for a textbook on music history. He proposed that she come to his house to get it. “I came home late that day,” Irina recalls. “Then we understood that we should be together.”

In 1962 Schnittke’s first opera “The Eleventh Commandment” was commissioned by the Ministry of Culture for the Bolshoi Theater. However, Alfred never became an “official” composer, as it was not accepted for performance. In 1965 Schnittke gave his first performances abroad: Music for Piano and Chamber Orchestra was played at the Warsaw Autumn International Festival and Music for Chamber Orchestra was performed in Leipzig. Since then Schnittke’s works were frequently played at major European festivals.

By this time Schnittke’s individuality as a composer had taken its form. His style combined various composers’ techniques according to the concept of “poly-stylistics,” which he introduced himself. Schnittke proposed to “step over the most rooted conventionality, which is an understanding of a style as a sterile clean phenomenon.” He played with styles and liked stylistic allusions, which, along with quotation, were his main principles of work. Alfred Schnittke was also a remarkable music theoretician, publishing analytical essays on music theory and the works of 20th century composers.

Critics praised his talent and free command of various genres. Schnittke composed nine symphonies, six concerti grossi, four violin concertos, two cello concertos, concertos for piano and a triple concerto for violin, viola and cello, as well as four string quartets and a variety of chamber music. He is the author of the operas “Life with an Idiot” (libretto by Viktor Yerofeyev, 1992), “History of D. Johan Faust” (libretto by Jorg Morgener and Alfred Schnittke, 1991-94), “Gesualdo” (libretto by Richard Bletschacher, 1993) and the ballets “Labyrinths” (libretto by Vladimir Vasilyev, 1971), “Sketches” (1985) and “Peer Gynt” (based on Henrik Ibsen’s drama, 1988).

However, there were strong opponents to Schnittke’s manner of work who compared his pieces to Malevich’s “Black Square.” They considered him a “fake” composer, who was fervently praised by the West. He was accused of lack of imagination, inability to create melodies, poor understanding of orchestration and trickery. There were attempts to exclude him from the Union of Soviet Composers and once he was even fired from the Moscow Conservatory (but was soon reinstated when no cause was found). In the 1970s there were times when his works were prohibited from being performed abroad and he was forbidden to other countries to play or to lecture. 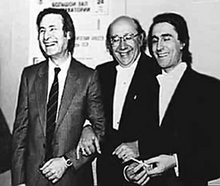 However, no accusations or obstacles could deter the composer’s creative activity. In the 1980s the popularity of Schnittke’s works became immense all over the world. They were played at leading concert halls in Germany, the United States, the United Kingdom, Japan, etc. Moreover, the musician was encouraged by the world’s leading performers - Gideon Kremer, Mikhail Rostropovich, Yury Bashmet, Oleg Kagan and Gennady Rozhdestvensky.

However, industrious work had a bad effect on Schnittke’s health. Alfred was also constantly worried about his and Irina’s son Andrey (born in 1965), who suffered from congenital heart disorder. This demanded a great deal parental care and there were times when Schnittke slept only 3-4 hours a day.

In June 1985 while Schnittke was at the Soviet resort of Pitsunda, he was hospitalized with a stroke. Three times he was said to be clinically dead, but he recovered. 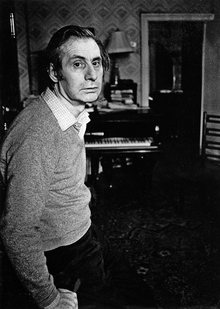 In early 1989 Alfred Schnittke received a grant from the Institute for Advanced Study (Wissenschaftskolleg) in Western Berlin to work and live in the centre of the city for a year. Soon Schnittke was offered a lecturer’s position at the Hamburg Institute of Music. He moved there for the next four years, until 1994.

Alfred Schnittke never came back to Russia. His health deteriorated and he was constantly treated in Germany. In 1994 he suffered another stroke. Although he recovered due to his wife’s care and to the advances of modern medicine, he remained paralyzed. Since then Hamburg became his second home.

Shostakovich once said: “Even if my arms are cut, I will write music anyway, holding a pen in my teeth.” Schnittke had the same persistence. Doctors created a special device that let Schnittke record the tones and notes he thought up, and the records were arranged into scores by specialists. Thus Schnittke wrote his final work – the 9th Symphony, dedicated to Gennady Rozhdestvensky.

There is a belief in the musical world that 9th symphonies bear a curse for their creators. When a composer writes his 9th symphony he “draws too near to otherworldly things, so bad things may happen to him.” Ninth symphonies became the last for Ludwig Beethoven, Anton Brukner and Gustav Mahler (he was working on his tenth symphony when he died) as it became the last for Schnittke. In the early summer of 1998 Schnittke suffered his third stroke and on 3 August 1998, he died in Hamburg.

Alfred Schnittke was buried on Novodevichye Cemetery in Moscow on 10 August 1998.

Denis Matsuev Denis Matsuev is a world famous Russian pianist, who is also greatly involved in the development of Russian music culture and education.

Leonid Utyosov Leonid Osipovich Utyosov is a legendary artist in Soviet culture. He was a brilliant actor, a singer, a conductor, an organizer, and a remarkable story-teller.