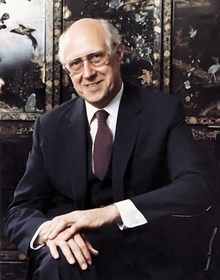 Music in his blood

Mstislav Rostropovich was born in Baku, Azerbaijan, in 1927. Like his father, Leopold, a Casals pupil who was also a distinguished international cellist, Mstislav first studied the piano with his mother, and only later, at the age of 10, the cello with his father. As a child, he also began to experiment with composition.

During the war the family moved to Orenburg, where Rostropovich completed his formal education and gave his first public performances, duetting with his sister, making local tours with the band of Leningrad’s relocated Small Opera Theatre and, at the age of 13, playing the Saint-Saëns concerto with the Ukrainian orchestra at Slavyansk.

At the Moscow Conservatoire, which he entered in 1943, his curriculum was dominated by cello studies with Semyon Kosolupov, whom he later credited with having made “a master of me with perfect command of the cello,” and composition with Shostakovich. Rostropovich’s creative as well as executants gifts had already been aired at Leopold Rostropovich’s final recital, shortly before his death in 1942 at the age of 50, in which the pianist son accompanied the cellist father in the former’s newly composed cello concerto.

The childhood appearances had drawn attention to an exceptional talent, and in the years after the war he began to appear in concerts in other countries with resounding success. He took first prizes at the international music awards of Prague and Budapest in 1947, 1949 and 1950, the same year in which he was awarded the Stalin Prize. He then studied further, with Casals, and by 1953 was lecturing at the Leningrad and Moscow conservatories.

The voice of cello

Rostropovich was first heard regularly in the West in the 1950s.

Widely considered to be the world's greatest cellist for much of his lifetime, he recorded virtually an entire repertoire and inspired many of the era's finest composers to create works especially for him. He was Music Director of the National Symphony Orchestra for 17 seasons and enjoyed special relationships as conductor with such widely varied orchestras as the London Symphony Orchestra, the New Japan Philharmonic in Tokyo, Japan, and the Vienna Philharmonic.

In 1955 Rostropovich married Galina Vishnevskaya, internationally recognized as one of the world's great sopranos. Thereafter he made frequent appearances as an excellent pianist in her recitals, which often featured Russian song rarities little known in the West. Together they toured the globe.

Standing up for freedom

Mstislav Rostropovich was recognized internationally not only as a consummate musician but as an outspoken defender of human rights. His tireless work as a defender of human rights included his courageous defence of Aleksandr Solzhenitsyn, and his trip to Moscow in August 1991 – unheralded, visa-less and at great risk to his life and freedom – to join those in the Russian White House resisting the attempted coup.

For his support of the democratic forces during the aborted coup he was presented with the State Prize of Russia. He received numerous awards for his efforts on behalf of human rights, among them the 1974 Annual Award of the International League of Human Rights.

Expelled from the USSR

In 1974 he and his family were permitted a two-year stay abroad. It was intended as a cooling-off period but because of his outspokenness he was soon deprived of his Soviet citizenship. This he found a hard blow. He and his family settled in the U.S. – a country that, ironically, had greeted his debut in 1956 with an almost empty Carnegie Hall. 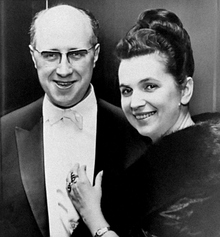 Thereafter, until the collapse of the Soviet empire, he was the subject of public indifference in official Russia, a “non-person” barely rating mention in reference books, though the continuing object of private interest and warmth among old colleagues.

In exile his international prominence as a cellist, pianist and musical ambassador increased, as did his conducting engagements. With the accession of Gorbachev in 1980 reconciliatory overtures were made but declined by Rostropovich, until his return to Russia in1991. After that more cordial relations with his homeland were established and cemented by the purchase of homes in Moscow and St Petersburg along with the establishment of the Vishnevskaya-Rostropovich foundation for sick children.

In addition to being the co-founder and president of the Vishnevskaya-Rostropovich Foundation, the Maestro worked tirelessly on behalf of children’s health. He served on the board of the Vaccine Fund (now part of the GAVI Alliance), acted as Special Representative of the Joint United Nations Program on HIV/AIDS (UNAIDS), and gave numerous concerts to raise money for charitable works on behalf of children in many countries of the world.

Musicians, statesmen and royalty all loved Rostropovich. When Senator Edward Kennedy heard of his troubles in the Soviet Union he personally asked Brezhnev to intervene. Astoundingly, Rostropovich was granted a two-year visa to “travel for artistic purposes”.

“People make a big mistake to think that I am interested in politics. I am interested in people. At first, I was a very good 'Soviet citizen.' But when I heard of Solzhenitsyn's plight, I went to see him and he was being treated like a dog. I offered him refuge and that is when my troubles started.”

Maestro Rostropovich held over 40 honorary degrees and 25 different nations lavished more than 90 major awards upon him, including Knight Commander of the Most Excellent Order of the British Empire, Commander of the Legion of Honour of France, membership in the Academy of Arts of the French Institute, often called the “Forty Immortals,” the Japan Art Association's Premium Imperial, and, from the United States, the Presidential Medal of Freedom and the Kennedy Centre Honours of 1992. Prior to leaving the USSR on an exit visa, he had received the Stalin Prize, had been named a People's Artist of the USSR and was a recipient of the Lenin Prize, the nation's highest honour.

It has often been said that the cello is the nearest instrument to the human voice and he made the cello 'speak' like no other. The secret lay not only in his phrasing but also in his sound. Rostropovich cajoled his audience through his cello and its sound was filled with the breath of God.