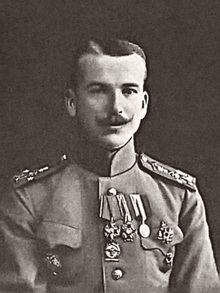 Pyotr Nesterov is a famous Russian pilot who is considered the founder of aerobatics. It was Nesterov who performed the so-called “dead loop” for the first time; in fact the an extremely difficult maneuver is more often referred to as “Nesterov’s loop.”

Pyotr Nesterov was born on 27 February 1887 in Nizhniy Novgorod into the family of an officer. When Pyotr’s father died the family lost its means of subsistence, forcing Pyotr’s mother to move with her four into a home for widows. It was a very difficult period. When Pyotr was ten yeurs old he entered the military school in Nizhniy Novgorod. An adept student, he graduated in 1904 and then enrolled in the artillery school. Nesterov was good at exact sciences; he enjoyed reading books about adventures and legendary commanders of the past and took a keen interest in the study of artillery usage during the Russo-Japanese war. During this period Pyotr Nesterov met his wife-to-be, Nadezhda Galetskaya.

They married and had two children, a daughter and a son.

In 1906 Pyotr Nesterov graduated from the artillery school with the rank of second lieutenant and was assigned to the Ninth East Siberian Artillery Brigade in Vladivostok. But he didn’t serve there for long. In 1910 Nesterov became interested in aviation. He 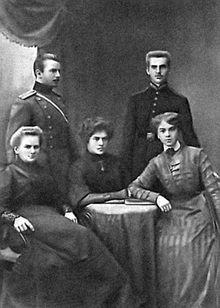 made friends with engineers who designed gliders and became obsessed by the idea of constructing his own plane. Nesterov worked hard on his project and after a year of research and construction, the glider designed by Nesterov was put to the test. The glider didn’t fly high or long, but still the successful experience opened Pyotr Nesterov’s path to the sky. In 1912 he passed all the necessary exams and became a military pilot. He studied ways to increase flight safety and improve air combat tactics. In those days Russian pilots flew French gliders, which offended Nesterov’s patriotic sensibilities. He wanted the specialists of his country to produce Russian gliders. He also wanted to prove that Russian pilots could perform various maneuvers in the air, but Nesterov’s idea that a pilot in a glider could perform the “dead loop” provoked derision. Pyotr Nesterov had no choice but to prove his words in practice.

On 12 August 1912 he performed a flight that lasted 13 hours. Nesterov traveled over 750 kilometers in his glider; it was a huge success for Russian aeronautics.

In November 1912 Pyotr Nesterov was sent to Warsaw. He served in the air force and proved himself as a test pilot. During one of his flights Nesterov reached a height of 1600 meters, a great achievement in itself, but in addition the pilot stopped the engine and started to lose altitude while making circles above Warsaw. Eye-witnesses were very impressed. Nesterov broke all the old-school rules of flying and won recognition as an outstanding pilot. 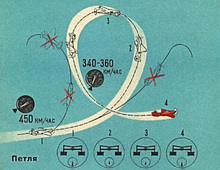 In May 1913 Pyotr Nesterov was sent to Kiev and appointed commander of an aircraft detachment. He elaborated a special program for his pilots and taught young specialists. He also initiated combined training activities for artillery and aircraft detachments, which were widely used later during World War I. By this time the name of Pyotr Nesterov was world famous. He was the great military pilot, experimenter and innovator who had put into practice unprecedented long flights - he once flew from Kiev to Saint Petersburg and back in one day! It was extremely fast for 1913. Still, Nesterov was never satisfied and always wanted to move forward. His dream was to perform the “dead loop” and he spent much time preparing for the dangerous experiment. Then on 27 August 1913 it happened. Nesterov’s glider shot up to a height of 1000 meters. Then the pilot stopped the engine. The glider made the loop and landed safely. Pyotr Nesterov became a national hero and was awarded with the golden medal for airmanship. Six days later French pilot Célestin Adolphe Pégoud also performed the “dead loop.” But the primogeniture of Pyotr Nesterov is doubtless. On 31 March 1914 Nesterov repeated the maneuver. He also elaborated military air tactics such as attacking the enemy’s glider, taking-off and landing in the dark and night air patrol. 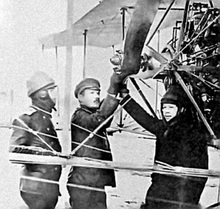 When World War I began Nesterov continued to fly in military conditions. His elaborations proved useful and effective and Nesterov continued to advance his ideas. He suggested using planes for bombing and ramming. Austrian commanders promised a lavish award to anyone who could bring Nesterov’s glider down. On 26 August 1914 the renowned ace took his final flight. Nesterov’s glider rammed an enemy plane that was much bigger than his own. Pyotr Nesterov brought the hostile plane down, but did not survive.

Pyotr Nesterov is buried in Kiev. His name has been given to streets in many Russian cities and monuments to the pilot have been erected in Kiev and Nizhniy Novgorod. The name of Nesterov has also been given to an asteroid.