For millions of Soviet people Mikhail Yegorov and Meliton Kantaria symbolized the USSR’s victory over Nazi Germany in World War II. The two men were Red Army soldiers who unfurled a red banner over the battered Reichstag in Berlin on 30 April 1945. The photograph capturing the raising of the flag became an iconic image of the Second World War. But the truth behind this event remains a dramatic tale of ambitions, ideology and cover-ups, both accidental and deliberate.

Meliton Kantaria was born in 1920 into a peasant family in Georgia. He worked at a collective farm until he was drafted into the Red Army in 1940. Ayear later he found himself on WWII battlefields, acting as a regiment’s intelligence agent. Mikhail Yegorov was born in a village in Western Russia. When his 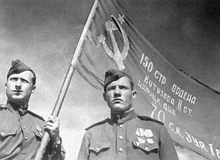 native Smolensk Region was occupied by the Germans, he became a partisan, only joining the regular army in 1944. By 1945, both men, part of the 756th Rifle Regiment, found themselves in Berlin.

In the closing days of World War II, the Red Army smashed its way into the German capital. The German army was overwhelmed into pockets of resistance, who either surrendered or put up fierce resistance in the ruined city. The Reichstag, the original German parliament building, became one of the Red Army’s key targets.

29 April 1945 marked the start of a brutal and bloody battle for the Reichstag, defended by some 1,000 men. According to the official version of events, in the evening of the next day, as fighting continued, Yegorov and Kantaria climbed onto the building’s roof 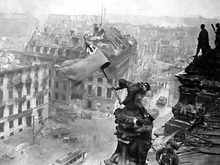 and hoisted the banner of victory. The story was never disputed during the Soviet era and the two men went down in history as Red Army icons. Yet, they were not the first ones to raise the flag. And the legendary photo of the banner being raised didn’t capture the actual moment of Soviet glory.

In fact, nine divisions took part in the storming of Reichstag and each had its own banner ready to be unfolded. Joseph Stalin had urged his troops to mount the flag on the Reichstag building no later than 1 May 1945. The soldiers were told that any piece of red cloth fixed to the building would mean that the battle for Berlin was won. So many used any scraps they could find to make their flags. What happened next is a matter of great debate. Some eyewitness accounts state that everyone wanted to be the first to raise their flag so there were plenty of volunteers. Other stories speak of a demoralized and exhausted army – realizing that victory was close, no one wanted to get killed in the last days of the war and few were up for a highly risky mission. 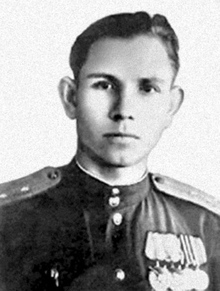 Whatever the truth, one version of events has it that the first to have fixed their red flag onto the building’s façade on 30 April were Lieutenant Rakhimzhan Koshkarbaev and Private Georgy Bulatov. Yet, it’s not their names that are most commonly found in history books. A more well-known story is that of the Makov team. On the same day, at 10:40 pm, a group of five soldiers headed by Vladimir Makov, scrambled to the top of the ruined Reichstag and raised the Soviet flag. The building still had some resisting German fighters inside, but despite their presence, Makov’s team made their way to the top. As they were climbing, they found a long pole and used their handkerchiefs to tie a red rag to it. A mounted statue on the roof of the Reichstag had a crown with holes where a flagpole could fit. So young Sergeant Mikhail Minin climbed the statue and inserted the flag into the crown.

As for Yegorov and Kantaria, they only managed to get to the roof during the second wave of the attack late at night – which means they hoisted their flag on 1 May. After Germany’s capitulation, Makov’s group was nominated for the Hero of the Soviet Union title - the highest distinction in the USSR that went together with a Gold Star medal. But they eventually received a lower-ranking award, the Order of the Red Banner. Instead, in 1946 the Gold Stars went to Yegorov and Kantaria who were officially proclaimed the first Soviet soldiers to have hoisted a red flag above the Reichstag. Why they were picked remains unclear – the two men apparently never claimed the glory of being the first. Some sources state that ideology was behind the move – the Russian Yegorov represented the Soviet motherland, while Kantaria was allegedly chosen to please Stalin, also a Georgian. 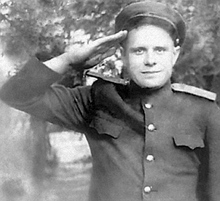 But even that wasn’t the whole story. Together with Yegorov and Kantaria there was another man, whose name was later erased from Soviet history books – Lieutenant Aleksey Berest, a Ukrainian. Eyewitnesses later remembered that as the storming of the Reichstag continued, a decision was taken to fix a flag on the building’s dome – the most visible spot; and not just any random cloth but one of the nine banners initially prepared for the mission. A group of soldiers tried to make their way to the top but soon returned – it was too dark and they didn’t have any torch lights. The commander, angered by the failure, then picked Yegorov and Kantaria for the task. To help them, Berest, a stout and strong-willed political officer was chosen. They climbed to the roof, waved the flag for all to see and fixed it there. Berest later told his daughter that he thought it must have been what hell looks like - the dome shone and the iron roof droned from explosions. From the top he could see that the whole city was on fire...
When in May 1946 a decision was made to award those who raised the red banner over the Reichstag, Berest wasn’t on the list. To those who served with him, it was a surprise. Years later, some said that the legendary Red Army commander, Georgy Zhukov, who led the final Soviet push into Germany, was behind Berest’s exclusion. Having a strong dislike for political officers, Zhukov personally crossed his name out. Others claimed that the uncompromising and straight-talking Berest fell victim of envy and intrigues. After the war, he was accused of embezzlement and although during his trial scores of people testified in his favor, he was sentenced to ten years in labor camps. After his release he returned to his family but the happiness wasn’t to last. Berest died tragically in November 1970, hit by a train at the age of 49. His name and wartime courage only became widely known in 2005 after Ukrainian President Viktor Yushchenko posthumously awarded him with the highest state decoration - Hero of Ukraine. 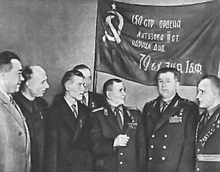 The Germans trapped in the Reichstag’s basement finally surrendered on the morning of 2 May 1945. It was on this same day that a Red Army photographer Yevgeny Khaldey took several men with him, found his way to the roof and staged what would become one of the most famous pictures of World War II, the raising of red Hammer and Sickle above the Reichstag. Khaldey had been on the front lines since the first days of the war. He came to Berlin looking for his one great shot – and he actually created it. The flag in the picture is said to be a red tablecloth Khaldey brought with him from Moscow. The hammer and sickle had been painstakingly sewn on by the photographer himself. When he approached the Reichstag, there were already plenty of Soviet flags there. He unwrapped his banner and, seeing some soldiers nearby, asked them to help him get to the roof and pose for several photos. The men were Aleksey Kovalev from Kiev, Abdulakhim Ismailov from the North Caucasus and Leonid Gorychev from Minsk. All three did take part in the storming of Reichstag and apparently even placed their own red cloth there. But it’s by mere chance that they found themselves posing for the shot that, retouched and perfected by the Soviet propaganda machine, would come to represent the USSR’s victory and revenge.

As for Yegorov and Kantaria, they went their separate ways. Meliton Kantaria demobilized in 1946, returned to Georgia and worked on a collective farm. He later moved to Sukhum in Abkhazia becoming a shop manager. In 1991 Abkhazia declared independence from Georgia. Fleeing the armed conflict that flared up, Kantaria and his family went first to Tbilisi and then to Moscow where Kantaria died in 1993. Mikhail Yegorov left the army in 1947 and settled in the city of Smolensk in his native region working at a milk products factory. He died in a car accident in 1975.