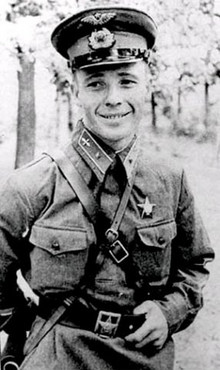 A Soviet fighter plane pilot during WW2, one of the first aviators to perform an aerial ram at night.

Viktor Talalikhin was born on September 18, 1918, in the village of Teplovka near the town of Volsk. When he was six years old, his family moved to Volsk. There, the Talalikhin family lived on the banks of the Volga river in a small house where Viktor spent his childhood. From his early years, young Victor dreamed about the sky. The Soviet Air Force had just been formed, so becoming a pilot was a new dream for boys all over the country.

The Talalikhin family moved to Moscow in 1933. Viktor’s father went to work at a meat-packing factory, and Viktor went to study at the plant’s college. After graduating, he began work in the factory.

Young Viktor applied himself in many areas and was well liked by everyone. He was nicknamed 'Baby' for being only 155 cm tall – the name stuck with him even when he later joined the military. At one point, Talalikhin joined a local drama circle and performed on stage, but it was a far cry from his lifelong dream – flying.

In 1935 the workers of the factory organized an airplane club. Victor saw it as a chance to tearn his wings. Besides, his elder brothers were already working in the field – Aleksandr served as an aviation mechanic, and Nikolay was a naval aviator. So, after coming home one day, Victor announced to his parents that he joined the club.

Talalikhin’s teachers said he was a good student, but a daredevil. He was so restless and passionate about flying, he just couldn’t keep in line with teachers’ instructions and was often scolded for his aerial tricks. He was in a hurry to be extraordinary. 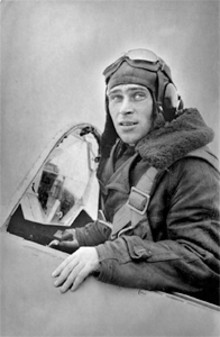 Talalikhin did get wiser with time, and soon mastered flying while also putting his hot temper to good use. In 1938 he joined the Red Army, and then graduated from the Borisoglebsk military pilot school. Victor served in the 27th fighter wing of the Moscow Military District. In 1939 his squadron was transferred to the Karelian Isthmus to protect the border with Finland.

The military conflict between the Soviet Union and Finland known as the 'Winter War' was about to start. It began with a Soviet offensive on 30 November 1939, three months after the start of World War II, and ended on March 13, 1940, with the Moscow Peace Treaty.

Victor sortied in 47 combat missions during operations on the Finnish front, and brought down several enemy aircraft. For valor and courage in the fight against the enemy, Talalikhin was awarded the Order of the Red Star. In March 1940, when the Soviet-Finnish war ended, Talalikhin returned to civilian life. In the spring of 1941 he finished a flight commander short course with honors, and was summoned to a newly formed fighter regiment near Moscow.

In June 22, 1941, Nazi Germany invaded the Soviet Union in the German military's largest operation in World War II. It was the beginning of the Great Patriotic War for the Soviet Union. Victor Talalikhin, like many other soldiers, was determined to join the fight. He vowed that as long as his heart was beating in his chest, he would seek out the enemy and keep the skies of his Motherland clear. The squadron in which Talalikhin served was ordered to defend the capital from the southwest. His regiment was stationed near the town of Podolsk, and was tasked with protecting Moscow. 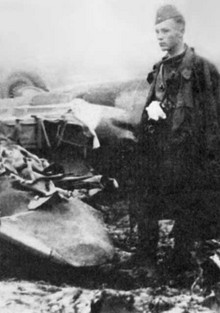 On the night of August 6, Nazi planes made an attempt to break through to Moscow. As they approached the capital, Nazi night-fighters were met with anti-aircraft batteries and Talalikhin’s air fighters squadron. A few enemy aircraft were shot down, and Talalikhin rammed one of them with his plane.

This is his account: “I ran out of bullets, so decided to cut off the tail of my enemy by ramming into it. I got closer to him – the distance between us was only some 10 meters. I saw the reinforced belly of the German’s plane. At this time the enemy fired at me through a machine gun. I felt that my right arm was injured, so I then pushed the gas pedal and rammed into his plane. I heard a cracking sound and saw my plane turn upside down. I had to catapult myself out of there as soon as I could – I unbuckled my belt and threw myself out. I flew down some 800 meters before opening the parachute.”

The Nazi Henkel-111 bomber and its crew were completely destroyed. Talalikhin landed in a lake on the outskirts of a village near the town of Podolsk. The local population soon found him, and helped him get to his squadron.

Talalikhin was among the first in the world to ram an enemy plane at night, which brought him instant fame in the newspapers the next day.

This is an excerpt from a newspaper article about him: “The German bombers were high above the ground. Suddenly in the light of the moon, Victor clearly saw a twin-engine bomber Henkel -111. A machine-gun burst disabled Henkel’s right engine. The fascist tried to break away from the Soviet fighter, but the latter pursued him. When Victor ran out of bullets, he went for the ram. Due to the terrible blow, Talalikhin’s plane rolled over and began to decline rapidly. Overcoming the resistance of the air the wounded pilot jumped from the cab and landed safely with his parachute.”

In 1941, soon after the beginning of the Great Patriotic War, Talalikhin was awarded the Hero of the Soviet Union. He and his other front-line soldiers received the award in the Kremlin. Mikhail Kalinin (the nominal head of the Soviet Union from 1919 to 1946) awarded him the Order of Lenin and the Gold Star medal.

He returned to the battlefield, and was soon shot down by five enemy aircraft near Moscow. On October 27, 1941 he led six planes and initiated an air battle with German fighters, who overpowered Talalikhin’s team. Viktor received a fatal wound to the head.

He died just a month after his 23rd birthday, forever remaining 'the Baby.'

Talalikhin was given a hero's burial in Moscow's Novodevichy Cemetery, and a few years later he was posthumously honored by being given a permanent postmortem enrollment in the first squadron of the regiment in which he served. He was so popular even after his death that streets and schools were named after him, monuments to him were erected, and Russian rock stars even sang songs about Talalikhin.