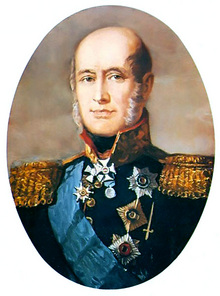 A famous Russian commander, Prince Barclay de Tolly was a hero of the First Patriotic War and anti-Napoleon campaigns in Europe. He was a full chevalier of the Order of Saint George, the highest military award of the Russian Empire.

Mikhail Barclay de Tolly was born into the noble Scottish Clan Barclay on 27 December 1761in Pamusis in the Duchy of Courland and Semigallia. He was raised in Livonia (then part of the Russian Empire, now divided between Estonia and Latvia). Some historians, however, argue that he was born in the Polish-Lithuanian Commonwealth (now Lithuania).

The future field marshal entered the Russian Imperial Army at an early age.

There is a legend in the Barclay family. Young Mikhail Bogdanovich was first

brought to St. Petersburg at the age of three. He stayed with the family of his aunt. One day his aunt took him out for a walk down Nevsky Prospect (the main street in St. Petersburg). Their sled was suddenly hit by a carriage and young Barclay de Tolly fell onto the road. The guard officer got out of the carriage and grabbed the child. He brought his apologies and returning the child to the scared woman said: “That’s a good boy! He didn’t cry! He is going to be a great man!” Returning to his carriage the officer added: “Always ready to serve, Captain of the Guards Grigory Potemkin.”

25 years later Field Marshal Potemkin handed Barclay de Tolly his first medal for capturing Ochakov. At that time Mikhail Bogdanovich was Captain of the Guards, just like Potemkin had been during their first meeting.

From the age of three de Tolly was raised in his uncle’s family. His uncle was a foreman of the Russian army and, following the custom of the time, enlisted young Barclay in 1767 in the Novotroitsk Carabineer Regiment.

Mikhail started active service in May 1776 when he was enlisted in the Pskov Carabineer Regiment. By May 1778 he had achieved the rank of cornet.

He took part in Russian-Turkish War (1787–1791) and was one of the most active participants in the capture of Ochakov.

In 1790 Barclay de Tolly was transferred to the Russian army deployed in the northern part of the Empire. That same year he operated against the Swedes in the Russian-Swedish War of 1788-1790. In 1794 he participated in military campaigns against Polish insurgents. For his merits during the capture of Vilno he was awarded with the Order of St. George. That same year he became a commander of the Eastland Yeager Corps.

In 1806 Mikhail Barclay de Tolly fought against Napoleon’s army in Europe. He was wounded in the Battle of Eylau on 7 February 1807. During the battle he commanded troops covering the retreat of the army. At the town of Gofa his troops constricted the entire Napoleonic army. In the battle Barclay de Tolly was wounded in the right hand and was forced to leave the army. The Emperor’s doctor was sent to Barclay and saved his hand. Later Emperor Alexander I paid a visit to Barclay. For his actions during the campaign Barclay was promoted to the rank of Lieutenant-General.

During the Russian–Swedish War of 1808-1809, Barclay’s successful military operations forced Sweden to surrender Finland to the Russian Empire. De Tolly was able to carry out the transfer of a large number of troops to Sweden in the winter on the ice of the Gulf of Bothnia. The estimated distance was about 100km from Vasa to Umeo. In March 1809 the transition was carried out brilliantly during a snowstorm. This maneuver predetermined the outcome of the war. For his success Barclay de Tolly was made a full general and appointed General-Governor of Finland.

From 20 January 1810 to September 1812 Mikhail Bogdanovich was Minister of War. During that time he implemented a number of reforms that improved the army supply system. He doubled the number of troops in the army, built engineering constructions, created rear supply bases and implemented new principles of combat training, emphasizing the need for precision shooting and cross-country area tactics.

During Napoleon’s invasion of Russia Mikhail Barclay de Tolly was the chief of the 1st Army of the West. It was the largest Army to face Napoleon. From the beginning of the campaign in 1812 Barclay de Tolly insisted on drawing the enemy deep into Russian territory. It was the first time the “scorched earth” tactic was used. Barclay was appointed Commander-in-Chief but the decision was revoked due to Barclay’s foreign origins. From a military point of view Mikhail Bogdanovich’s tactics during the early period of the war were correct. But there was a great push for more decisive actions. After the loss of Smolensk, Tsar Aleksandr I could no longer ignore the outcry from officers and civilians. Mikhail Kutuzov was appointed Commander-in-Chief and Barclay de Tolly remained in charge of the 1st Army.

Mikhail Bogdanovich was in charge of the right flank and the center of the Russian Army during the famous battle of Borodino (7 September 1812). During the battle Barclay showed amazing composure and bravery. He personally led his troops in the attacks. In one day alone four horses were killed under Barclay, two nearby aide-de-camps also perished and nine officers were wounded.

Kutuzov approved of Barclay’s tactics, but still he was misunderstood by his contemporaries. The surrounding situation over Mikhail Bogdanovich was pressing. He wrote in a letter to his wife: “I am sure I did everything I had to do to save the Empire. His Majesty still has an army to defeat the enemy. After numerous bloody battles I almost equaled us with the French army. It is my merit that our army didn’t suffer a defeat at Borodino. This conviction will be a refuge to me till the end of my days.” 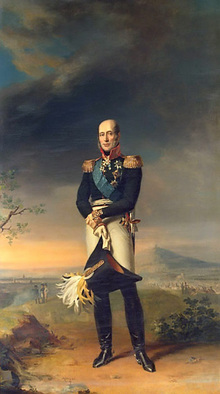 Insulted over the misunderstanding of his actions and feeling he had been treated unjustly, Barclay de Tolly submitted a report asking for permission to leave the army. He was granted leave but in less than a year he was recalled.

After Napoleon was driven from Russia, the eventual success of Barclay's tactics made him a romantic hero. His popularity soared and his honor was restored by the Tsar.

After Kutuzov’s death Barclay became Commander-in-Chief again and took part in the European campaign against Napoleon. He took Paris in 1814 and in reward received a Field Marshal’s baton.

During battle Barclay de Tolly was distinguished by an unusual composure. There was a soldiers’ saying about him: "Have a look at Barclay and the fear does not take."
One of his contemporaries wrote about him: "If the whole universe was distressed and threatened to suppress its falling he would look without a shudder at world destruction."
Eventually the long wars had a harmful effect on Barclay’s health and he was sent to Germany to restore his wellbeing. He died on his way there on 26 May 1818 at the age of 57. The Prussian King Frederick William III sent a guard of honor to accompany a mourning ceremony to the border of the Russian Empire.

A grand statue of Barclay de Tolly was erected in front of the Kazan Cathedral in St. Petersburg on behest of Emperor Nicholas I. There are also monuments to Barclay in Moscow and Tartu.