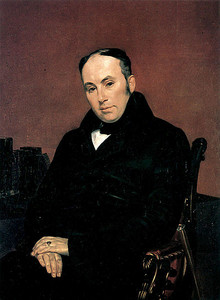 Vasily Zhukovsky was an outstanding 19th century Russian poet. Aleksandr Pushkin, arguably the country’s greatest poet, wrote of Zhukovsky: “I am not his successor, but rather his pupil... Nobody has had or will have as powerful and varied a poetic voice as his.”

A translator of poetry from a variety of European languages, Zhukovsky brought the spirit of European Romanticism to Russia. Among others, he translated Byron, Schiller, Goethe and Walter Scott into Russian. His impact on Russian literature was that much greater by dint of his sheer talent: His poetry ranges from the short lyric to the epic, and his writing includes prose, drama and critical essays. His poems ‘Ludmila’ and ‘Svetlana’ were based on German medieval folklore, and popularized the ballad in Russia. His elegies and ballads were also a source of inspiration for many Russian poets. Zhukovsky wrote notable lyrics and odes, including the patriotic poem ‘The Bard in the Camp of the Russian Warriors’ (1812) that saw Russian verse attaining a new sense of flexibility and grace.

Vasily Zhukovsky was the son of Afanasy Bunin, a landowner of property in the town of Mishenskoe in the Tula province. Bunin's wife Maria was not Zhukovsky’s mother, however. A serf on the Bunin estate had gone to fight in one of Russia’s many campaigns against the Turks. As he departed, Bunin jokingly asked him to bring him back a good-looking Turkish girl, since his wife was getting old. The servant obliged, and in 1770 Bunin found himself in the company of 16-year-old Salkha, already a widow as her husband had been killed in a battle with the Russians for the fort at Bendery. She was christened Elizaveta, and installed in an outlying part of the manor. 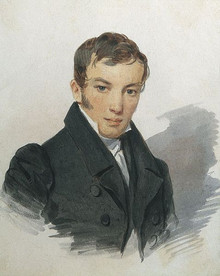 Bunin had three daughters by Elizaveta, all of whom died in infancy, and a son: The future poet Zhukovsky. Bunin's wife, all but one of whose children had died, raised the boy as her own. He was given the family name of his godfather Andrey Zhukovsky, a relative who survived on the charity of the Bunins. Young Vasily’s somewhat bizarre situation was complicated by the fact that his mother was also employed as a housekeeper on the estate, while his considerably older half-sister, the Bunins' daughter, behaved more like a second mother than a sibling towards him. When Bunin died in 1791, the boy received nothing in his will, but Maria Bunina still treated him as a member of the family. Though Zhukovsky's childhood was mostly a happy one, his confused familial situation left him a wistful outsider in a tribe of more than a dozen female cousins and nieces.

Zhukovsky grew up in a pious home atmosphere full of poetry, amateur theatrics and music-making, which clearly fostered both his literary calling and his philosophical disposition and character.

Zhukovsky’s earliest poetic efforts, which have been lost, were likely written before he was ten. By the age of 12, he had composed a classical drama inspired by Roman history that was enthusiastically performed and warmly received in the family. He was also very fond of drawing, which he practiced since the age of four when he made a chalk drawing of Jesus Christ on the floor of the manor, copying it from an icon. 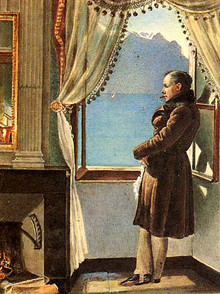 A maid discovered the drawing and fell on her knees, incessantly bowing in prayer. She insisted that the room had suddenly been lit with divine light, and claimed she heard sounds of music; the doors opened, and she said she saw the drawing appear by itself. The young artist spoiled the fantasy, revealing that he had created the calk artwork. Later on, Zhukovsky became famous in the annals of Russian art as a master of landscape painting and travel sketches.

Zhukovsky's education began in 1789 at a private school in Tula, the provincial capital, and continued at the city’s main public school.

Though clearly a bright child, he had difficulties paying attention in the strict classroom atmosphere of the public school, from which he was expelled in 1794 for lack of progress. For the next three years he was tutored at home with the girls of the family, and in 1797 he was sent to the Moscow University Preparatory School for Nobles. The school was a prestigious institution where many lessons were taught by Moscow University professors, and matriculated many notable Russians. The head of the school and the director of Moscow University, Ivan Turgenev, was a Freemason like his friend Afanasy Bunin. The school imparted on its students the Masonic ideals of moral self-improvement, charity and civic duty.

Zhukovsky formed the first deep friendships of his life there, particularly with the Turgenev brothers, the sons of the university’s director. He began to write while still attending preparatory school; by the time he graduated, he had already published several poems and articles in literary periodicals. He also began what became one of his principal forms of literary activity: Unable to afford books for class, he earned money by translating the works of the popular German writer and state official August von Kotzebue.

Early dedication to poetry and prose

One noteworthy stage of Zhukovsky's literary career was his participation in Journal of Europe, the leading Russian journal of the first decade of the 19th century. In 1802, Zhukovsky published in the journal a free translation of Thomas Gray's ‘Elegy Written in a Country Church Yard.’ The translation introduced Russian readers to Zhukovsky’s sentimental-melancholy style, and earned him immediate fame. Today, this elegy is cited as the origin point of Russian Romanticism. 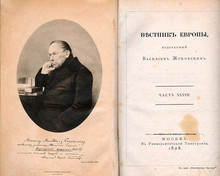 Vasily Zhukovsky and «Herald of Europe»

In 1808, famous Russian writer Nikolay Karamzin asked Zhukovsky to take over the editorship of his journal, the European Messenger. The young poet used his new post to explore Romantic themes, motifs and genres. Zhukovsky dedicated much of his best poetic work to his half-niece Masha Protasova. He held an unrequited love for her since she was 12, which clouded his personal life for years. His passionate, but futile, affair with Masha became an indelible part of his poetic personality.

Napoleon invades in 1812, a patriot is born

When French Emperor Napoleon I invaded Russia in 1812, Zhukovsky joined the Russian army with the general staff under Field Marshal Mikhail Kutuzov. While in the military service, he wrote many patriotic verses; the poem ‘A Bard in the Camp of the Russian Warriors’ helped Zhukovsky establish his reputation at the imperial court. He later composed the lyrics for the national anthem of Imperial Russia, ‘God Save the Tsar!’

After the war, he became a courtier in St. Petersburg, where he founded the Arzamas literary society to promote European-oriented, anti-classicist aesthetics. Members of Arzamas included a teenaged Aleksandr Pushkin. The two became lifelong friends, and Pushkin was greatly influenced by his older friend as he increasingly relied on Zhukovsky’s protection and patronage.

Unsuited for life in court 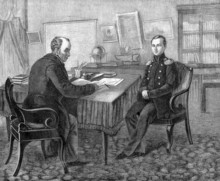 In 1816, Zhukovsky was offered a prestigious position teaching Russian to a young princess, which included a high salary and an apartment on the palace’s premises. His friends teased that he would become famous as a court poet, with his talent wasted on madrigals and lyrics. But they were mistaken: Honest and unable to play the hypocrite, Zhukovsky was not fit for the idiosyncrasies of court etiquette. His open demeanor played a key role in his relationship with the royal family, however – in 1826, the poet was appointed the tutor of the future Emperor Alexander II. His progressive curriculum had a powerful influence on the young Alexander.

His high position at court also offered Zhukovsky a chance to express public support for free-thinking writers as Mikhail Lermontov, Aleksandr Herzen, Taras Shevchenko. When Zhukovsky learned that Pushkin had been mortally wounded in a duel, he rushed to see the dying poet. After Pushkin's untimely death in 1837, Zhukovsky not only rescued his papers and archives – including several unpublished masterpieces – from censorship, he also collected and prepared them for publication. In doing so, he perhaps ensured Pushkin’s now-famous legacy. It was Zhukovsky who secured permission to publish Pushkin’s complete works, which began appearing a year after the poet’s death. 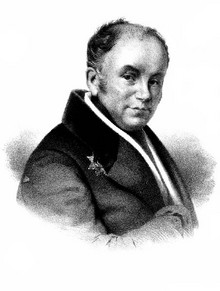 Throughout the 1830s and 1840s, Zhukovsky promoted the career of another close friend, the great satirist Nikolay Gogol. Following the example of his mentor Nikolay Karamzin, Zhukovsky traveled across Europe throughout his life, meeting and corresponding with cultural icons like Johann Wolfgang von Goethe, or landscape painter Caspar David Friedrich. One of his early acquaintances was the popular German writer Friedrich de LaMotte-Fouquet, whose prose novella ‘Undine’ was a bestseller in Europe. In the late 1830s, Zhukovsky published an original translation of the novella that reestablished his position among the poetic avant-garde.

In 1841, Zhukovsky retired from court and settled in Germany, where he married the 18-year-old Elizabeth Reitern, the daughter of an artist friend. The couple later had two children. He devoted much of his life to a hexameter translation of Homer's ‘Odyssey,’ which he finally published in 1849. Although the translation was far from accurate, it became a classic in its own right and occupies a prominent perch in the history of Russian poetry. Some scholars argue that both his Odyssey and Undina are long narrative works that made important, though oblique, contributions to the development of the Russian novel.

Zhukovsky died in Germany in 1852, and is buried in the Aleksandr Nevsky Lavra in St. Petersburg.