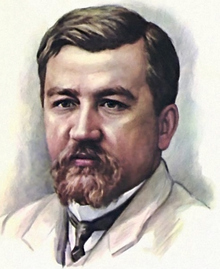 Aleksandr Kuprin was born on 26 August 1870 in the provincial town of Narovchat, in Penza Province in southern Russia. The only son to survive in a family otherwise made up of girls, he became his mother’s favorite. His mother, Liubov' Kuprina, a strong-willed and somewhat authoritarian woman, was undividedly honored with the title of “supreme creature” by her son. Even at the age of sixty, Kuprin still spoke of his mother with awe and piety. A descendant of a princely Tatar family, the Kulunchakovs, she was proud of her ancestry and instilled like-minded feelings in her son; not surprisingly, one of the persisting themes in his art was the fate of the Tatars. He also very much appreciated his mother’s sense of expression. “How many times would I steal from her, weaving her words and expressions into my own stories,” he wrote. His father, Ivan Kuprin, a clerk for the arbitrator in Narovchat, died of cholera n 1871, at the age of thirty-seven when Aleksandr was barely a year old, and the impoverished Kuprin family was forced to move to the Widows' Home in Moscow in 1874.

In 1876, at the age of six, young Kuprin entered the Razumovsky Pension for orphans of the gentry. He then resumed his education in the Second Moscow Military High School (known as Cadet Corps), which he entered in 1881, and completed his studies seven years later at the Alexander Military Academy.

Reflecting on his cadet childhood, Kuprin saw the general environment of military schools as dreadful. Taught to perceive themselves as superior to civilians, the boys at military schools were however denied any chance for a creative outlet.

At the age of ten, the boy was confronted with the raging injustice, encouraged at military schools. Notions of nobility and justice, introduced by his mother, conflicted with the triumph of mindless power over weakness, propelled by the military disciplinarians. The teachers were rigid and physical punishment was common; the most serious crimes were grounds for suspension in the isolation room.

Still, the harsh conditions of the cadet corps developed in Kuprin a craving for writing poetry. When he started writing at the age of ten, he was lucky to secure the backing of an unusually sympathetic and intelligent teacher, Tsukhanov, who helped young Kuprin enhance his literary skills. During his years at school Kuprin wrote approximately thirty poems – of patriotic, satirical, and lyrical character.

In 1889, at the age of nineteen, Kuprin published his first serious literary work, a short story entitled "The Final Premiere" in the Moscow “Russian Satirical Paper.” Kuprin based the story on a real incident involving an actress whose unrequited love forced her to commit suicide during a performance. "The Final Premiere" caused a scandal when school officials learned about it as cadets were not permitted to publish unapproved pieces. Kuprin's unauthorized publication cost him several days in the guardroom for unsuitable behavior. The memory of this furor stayed with him and inspired later works, including his long, autobiographical novel “Junkers,” written in 1928-1932 and published in 1933.

Upon his graduation from the military academy in 1890 with the rank of sub lieutenant, Kuprin joined the infantry in Proskurov, near Zhitomir, in southwest Ukraine. 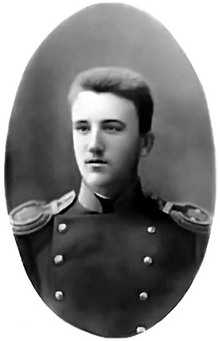 He deeply loathed serving in the military and was constantly possessed by the idea of resignation. The only thing that shelved his decision to quit was a serious relationship with a girl. As a provincial minor officer, Kuprin wasn’t much of a catch for a husband, but the girl’s father promised to go ahead with the marriage if Kuprin entered the Academy of the General Staff. In the fall of 1893, he traveled to St. Petersburg to pass the entrance exams, but it never happened, as Kuprin was almost immediately summoned back to the regiment. He was punished for a row he’d had with a local policeman on his way to St. Petersburg, which ended when Kuprin tossed the aforementioned policeman in the Dnieper River.

Robust as a boy, Kuprin was also strong as an adult. Very emotional and impulsive, he was normally kind and charming, but could become dangerously reckless when put out of temper. This emotional instability played against him many times and hindered his career. One of the bitterest examples dates back to 1908, when Kuprin was almost elected an honored member of the Academy of Sciences but as Ivan Bunin, Kuprin’s friend and an outstanding writer, recalled: the academy did not accept him because its members were afraid he might abuse his privileges when under the influence of alcohol.

During his military service in Ukraine, Kuprin started to publish in local Kiev newspapers both as a journalist and as a writer, gradually developing his style and the scope of his themes. He wrote several stories about the human psyche, among them "Psyche" (1892), “On a Moonlit Night” (1893), and "In the Dark” (1893). His frequent but irregular literary experience soon resulted in two collections entitled “Kiev Types” and “Miniatures.”

His work for the Kiev newspapers, writing for the casualties and humor section was a school of writing for Kuprin and he maintained his love for journalism throughout his life.

In 1896, Kuprin was hired as head accountant in the railroad works in the city of Donetsk, witnessing the life of railroad workers and putting all of his observations into a set of essays, to later shape them into a larger and more serious work, “The Moloch,” which marked the start of Kuprin’s most prolific decade of writing at the turn of the century. Together with “Moloch” (1896), a documentary of the plight of workers, among his most outstanding works of the time were his ode to femininity “Olesja” (1898), “At the Circus” (1901), “Horse Thieves” (1903), “The Duel” (1905), which portrayed the cruelty of life in a Russian military garrison, and “The Garnet Bracelet” (1911). Kuprin found his characters among ordinary people around him, the realism of his stories very often mixed with his beloved chivalric romanticism, like in the action and adventure story “The River of Life” (1906). “The Pit” (1905-1915) narrates the daily routine of prostitutes in the city of Odessa. In 1909 Kuprin was awarded the Pushkin prize, alongside Ivan Bunin.

In 1897 Kuprin met Anton Chekhov and in November of 1902 – Maxim Gorky, receiving high acclaim from both for his work.

Kuprin visited Moscow and blended into the literary circles. Continuing his full-time writing career, in 1901 he relocated to St. Petersburg. Among the St. Petersburg intelligentsia Kuprin drifted together with publishers of the “God’s Peace” magazine, and even married one of their daughters, Maria Davydova, in February of 1902. The marriage produced a daughter, Lidia, born in 1903.

On 15 November 1905 Kuprin witnessed the severe scotch of the Ochakov cruiser mutiny of the Black Sea Fleet in the port of Sevastopol. In a time of general social unrest, such mutinies were commonplace. Before Kuprin’s eyes, the wall arsenals of Sevastopol fired up the revolutionary cruiser, while the castigators from the pier shot down sailors who tried to swim away from the enflamed ship. A horrified and outraged Kuprin described this tragedy in an essay, which cost him banishment from Sevastopol and a lawsuit. However, when 80 sailors were revealed to have safely escaped from the Ochakov, Kuprin lent every support to them, providing them with civilian clothes and hiding them from the police.

In 1907, after his second marriage to Elizaveta Heinrich, Kuprin experienced severe money troubles and serious debts. Obliged to provide for the family, he had to resort to journalism and the unsettled lifestyle that came with it.

With the start of WWI, Kuprin became a military instructor, while his house in Gatchina, a suburb of St. Petersburg, was turned into a small military hospital. The feeling of the impending crisis is reflected in some of his stories during this time. 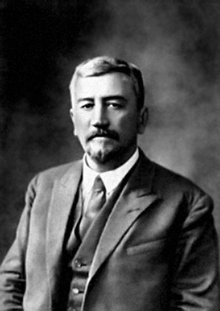 Like most Russian intelligentsia, Kuprin repulsed the Bolsheviks and very likely remained an anti-Communist throughout his life, though he did make attempts to cooperate with the new regime. He was part of the “World Literature” project supervised by Maxim Gorky and had discussions with Lenin about opening a newspaper for peasants, a project however that never came to light. In his short stories of the period, “Sashka and Yashka,” “Brave Defectors,” “Caterpillar,” and “Solomon’s Star” no direct reference is made to political events. In the fall of 1919 Kuprin became editor of a newspaper issued by the one of the counter-revolutionary armies and later fled with it to Estonia and then to Paris in the summer of 1920.

One of the many Russian émigrés writing in Paris, he lived a life of poverty for the next seventeen years, away from his readers, severely homesick and in bad shape, both physically and professionally. "My homesickness does not pass, it does not blunt, but attacks me ever more frequently and becomes ever deeper," he wrote.

As an émigré, Kuprin devoted himself mainly to journalism. While working in the Paris media, he published many articles denouncing Bolshevik ideology, condemning the decay of Russian culture and the degradation of the Russian intelligentsia, who accepted the revolution, and expressed his general concern about the imminent socialist threat to Europe.

As his feelings of impending death and torturous homesickness weighed on him, Kuprin made plans to return to Russia. He was tormented by bitter thoughts that he had abandoned his beloved country in times of troubles. Very sick and completely unable to resume writing, Kuprin returned to Russia in 1937, full of ideas for new stories and scripts – hopes not destined to be realized.

Upon his return to Stalin’s Soviet Union, Kuprin received the red carpet treatment from the Russian government and people. But he was too weak and defeated by severe illness for his writing to regain its pre-war vigor. He settled in the Golitsyn Home of Art and was frequently visited by his old friends and colleagues.

Less than a year after returning home, at the age of sixty-eight, Aleksandr Kuprin died of an incurable form of cancer on 25 August 1938 in Leningrad. He was buried at the Literaturskiye Mostki in the Volkovskoye Memorial Cemetery.

Aleksandr Blok One of the most prominent Russian poets in the early 20th century, Aleksandr Blok was a true romantic of his time. Writing during the so-called Silver Age of Russian poetry, he was a notoriously bad husband and an avid supporter of the revolution, only to become disappointed by it to death, quite literally.