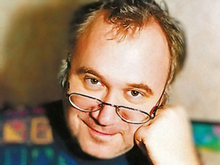 The chemistry of lyrics

In the early 80s Kormiltsev worked at the popular Sverdlovsk club 220 Volts where he became active in the then-burgeoning Sverdlovsk underground rock scene, writing lyrics for several local bands.

But he is best-remembered for co-writing some of the best-known songs for the then idolised Nautilus Pompilius. Kormiltsev started working with the band on a permanent basis in 1985. Among their best-known songs are the anti-totalitarian anthems Skovanniye Odnoi Tsepyu (Chained Together) and Shar Tsveta Khaki (Khaki-Colored Globe), as well as Walks on water, Goodbye, America!, Ya Khochu Byt s Toboy (I Want To Be With You), Na Beregu Bezymyannoy Reki (On the Shores of the Nameless River), and Tutenkhamun.

During Perestroika the band gained massive popularity and Kormiltsev's lyrics were widely sung and quoted throughout Russia. The poet issued the book of lyrics Bound by One Chain illustrated by Butusov, the band’s frontman, in 1990.

Nautilus was born in early 80s in a smoke-filled dorm of the Ural Institute of Architecture, where Butusov was a student. Most of the songs were incredibly daring for that time, mixing scathing social satire with dark musings, unthinkable just a few years before. But the local Party authorities (headed by Boris Yeltsin at that time) were unusually permissive, and Nautilus never suffered any serious censorship.

As late as the end of 1986 such liberalism towards ballsy rock was hardly known outside of Sverdlovsk and the narrow circles of Moscow and Leningrad rock hang-outs. Then, in 1987 Nautilius's popularity exploded, as the Perestroika-era awakening, and the urge to smash ideological dogmas appeared perfectly in synch with the Nautilus message.

At the end of 1987 the most explicitly political, largely anti-Soviet song, Chained Together, (with the famous lines: “And if there are those who come to you, Then there will also be those who come for you”) was shown on the main Soviet TV channel. 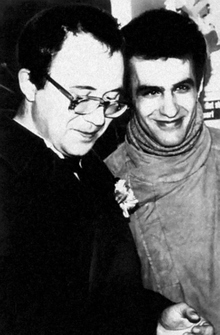 Perhaps the most popular (chart-wise at least) of Kormiltsev's compositions was actually a love ballad. But there wasn't anything happy and sugary about it. The song, Ya Khochu Byt s Toboy (I Want To Be With You), was a descent into the abyss of a crazy, hallucinatory and suicidal teenage love affair, set against the urban jungle and the social contradictions of the late-Soviet era. No other modern Russian poet managed to describe the torture and desperation of youthful hormonal hell woven into chaotic social surroundings so accurately.

In a 1988 a poll by the daily paper Komsomolskaya Pravda, 87% respondents voted I Want To Be With You as the best song of the year on a scale not seen before or since. However, being always an opponent of the authorities (Soviet as well as post-Soviet), he rejected the Lenin Komsomol Award that was given to Nautilus Pompilius in 1989.

Thanks in a large part to Kormiltsev and Nautilus, the grim and cold industrial city of Sverdlovsk (now Yekaterinburg) became a capital of the new Russian rock scene during the 80s, along with Leningrad and Moscow. For about a decade the Yekaterinburg scene produced a dazzling variety of bands, most of which used Ilya Kormiltsev's lyrics for their best songs.

The end of Nautilus and beginning of new projects

Kormiltsev didn't do well financially, despite the huge success of the songs he wrote in the 80s and into the 90s. Later Kormiltsev continued to write songs for Nautilus, who broke up and reformed several times through the 90s. Some of those songs, such as Titanic, The Sweet Vampire and Wings, were considered to be just as great as those from their heyday in the mid-80s. After nearly 20 recorded albums, the band split up in 1997.

Along with Nautilus came other projects: Urfin Juice, Chaif and singer Nastya Poleva. All of them were alternative in a brutal, uncompromising sense. The best- known (and much less radical) of them was Nastya Poleva, a performer of sophisticated art-rock, whom some even compared to Kate Bush.

Kormiltsev also translated into Russian works by many English and American authors ranging from William. S. Burroughs, Bret Easton Ellis and Irvine Welsh to Tom Stoppard, Chuck Palaniuk and C. S. Lewis. Umberto Eco’s Foucault's Pendulum was also rendered into Russian by him. It is said that Kormiltsev mastered five foreign languages in all. A collection of Kormiltsev’s own poetry, short stories and plays was published in a single volume called Nobody From Nowhere in 2005.

In 2002 Kormiltsev founded the publishing house UltraKultura which achieved cult status for publishing a wide range of nonconformist, provocative, shocking, left-field literature, from opposition writers like Eduard Limonov or Alexander Prokhanov to anthologies of American Beat poetry and the writings of Islamic extremists, skinheads, left radicals and anti-globalists, as well as ideological tracts for the ‘Orange Revolution’ youth movements, and translations of Marijuana: the Secret Cure, etc.

UltraKultura was attacked by the authorities for promoting pornography and drug use and some of its books were confiscated. In its short existence, UltraKultura has gained notoriety and had the highest number of lawsuits per year.

The publishing house has also faced severe financial problems and an uncertain future. After Kormiltsev’s death it was taken over by a much bigger publishing company, and is likely to pursue a more cautious, commercial editorial line in the future.

The latter years and death

As he got older, Kormiltsev became an increasingly radical, cranky, sardonic misanthrope. A persistent critic of the Kremlin’s politics, Kormiltsev protested when Vyacheslav Butusov performed, for a fee, for 5,000 activists of Nashi at the Kremlin-backed youth movement’s summer camp in July 2006, singing old Nautilus songs.

He compared Nashi with the Chinese Cultural Revolution’s infamous Red Guards. He alienated many people, including those who worshipped his songs, with snide remarks and personal attacks – to such an extent that some otherwise reasonable fans of Nautilus even sent terrible curses and later gloated about his illness and death in the Russian blogosphere. On February 4, 2007 Ilya Kormiltsev passed away in London, after a rapid and terminal bout with cancer of the spine, which had been diagnosed just a few weeks before his death.