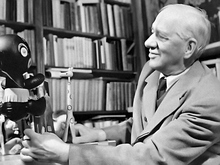 Korney Ivanovich Chukovsky (real name, Nikolay Vasilyevich Korneychukov) was a famous Russian/Soviet poet, publicist, critic, translator and student of literature. He is primarily known for his children’s tales, both in poetry and prose.

Chukovsky’s mother, Ekaterina Korneychukova, a Ukrainian peasant, worked as a maidservant in the home of his father, a student from St. Petersburg. The student left Ekaterina because he couldn’t dare to break his father’s taboo on marrying her. She had to leave for Odessa together with her son and daughter. There, Korney went to a gymnasium, but was expelled from the fifth form because of his lowly origin. His mother barely earned enough to get by and couldn’t afford home education for her son, but he never gave up and studied by himself, mastering English and French and passing all the exams to receive the school certificate.

Chukovsky’s interest in poetry originated from his early years, when he started writing verses and poems. In 1901 his first article was published in the “Odessa News” (“Odesskie novosti”) newspaper. He wrote articles on various subjects, from philosophy to causerie. Two years later he married Mariya Goldfeld, the 23-year old daughter of a bookkeeper. It was a happy marriage. The elder two of the couple’s four children lived long lives and later became writers themselves. Their names were Nikolay and Lidiya. Their youngest daughter Masha died early of tuberculosis, and their son Boris was killed at war.

In 1903 Chukovsky went to London as a correspondent for the “Odessa News,” where he studied and wrote about English culture. After his return he settled in St. Petersburg, working as a literary critic for the “The Scale” (“Vesy”), a magazine on literature, bibliography and criticism published in 1904-1909. Later he began publishing his own satiric magazine “The Signal” (“Signal”), but was soon arrested for his sharp criticism of the government. 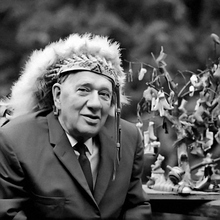 In 1906 Chukovsky moved to Finnish Kuokkala (now Repino in Russia’s Leningrad region) and settled there for ten years. The merged names “Chukovsky” and “Kuokkala” formed “Chukokkala,” a name he used for a handwritten humorous almanac that he kept until his final years.

In 1907 Chukovsky published translations of Walt Whitman’s works, which increased his popularity in literary circles and earned him recognition as an influential critic. His articles were published in periodicals, and later gathered into the books “From Chekhov to Our Days” (“Ot Chekhova do nashikh dney”), 1908; “Critical Stories” (“Kriticheskie Rasskazy”), 1911; “Faces and Masks” (“Litsa i Maski”), 1914; “Futurists” (“Futuristy”), 1922 and others. Chukovskiy was also absorbed in studying the works of his favorite poet Nikolay Nekrasov, a famous 19th century Russian poet, writer and publicist. He contributed to the publication of the first Soviet collection of Nekrasov’s poetry. He finished his work on the collection in 1926 after working through numerous manuscripts and supplying scientific comments to many of the texts. Chukovsky wrote the books “Nekrasov as an Artist” (“Neksrasov kak hudozhnik”), 1922, “Nekrasov’s Mastership” (“Masterstvo Nekrasova”), 1952 and a collection of articles entitled simply “Nekrasov,” 1926.

Chukovsky began his career as a children’s writer during routine editor’s work. He had to put together the almanac “Firebird” (“Zhar-Ptitsa”), the name of a fairytale bird with beautiful flaming plumage. He wrote his first tales for the almanac. They were called “The Little Chicken” (“Tsyplenok”), “Doctor,” and “The Dogs’ Kingdom” (“Sobachye Tsarstvo”), and were something completely new for the writer. Then, Maxim Gorky, a famous Soviet author and publisher, asked him to write a children’s poem for a collection. The creation of the poem was helped by random chance. Chukovsky was in a train to St. Petersburg with his son, who had fallen ill, and was telling the boy a tale about a crocodile, which he composed on the spot. The child was listening very attentively and remembered the whole tale by heart. Thus was born one of Chukovsky’s most famous tales “The Crocodile” (“Krokodil”), which was published in 1916. That same year Chukovsky became a military correspondent for the newspaper “The Speech” (“Rech”) in Great Britain, France and Belgium. A year later, when he returned to St. Petersburg, he started to observe and write down the way children speak. He continued to make such notes throughout his life. They were the foundation for a book, which was first published in 1928 under the name “Malenkiye Deti. Detskiy Yazyk. Ekikiki. Lepye Nelepitsy” (which can very roughly be translated as “Little Children. The Children’s Language. Senseful Nonsense,” with the untranslatable “Ekikiki,” an imitation of random children’s babble). It was publish 21 times and in each edition something new was added. 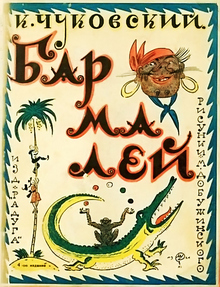 Children’s minds and the way kids learn to speak became an obsession for Chukovsky. He wrote his most famous tales “Moydodyr” (roughly translated as “Wash’em’clean”) and “Tarakanishche” (the name simply means “Giant Roach” but more in the sense of “Roach-zilla”) in 1923, “Mukha-Tsokotukha” (roughly, “The Clattering Fly”) in 1924, “Barmaley” (this one is named after the tale’s chief villain) in 1925 and “Telefon” (“Telephone”) in 1926, which are still considered masterpieces of children’s literature and are published to this day. In these tales Chukovsky appealed to the way children perceive the world and their native language (which can be seen from the choice of titles).

In the 1930s Chukovsky worked on many translations and also began to write his memoirs. In 1957 he acquired a Grand PhD in linguistics, and five years later, the honorary title of Doctor of Literature from Oxford University. As a linguist, Chukovsky wrote a book on Russian language called “Live as Life” (“Zhivoy kak Zhizn”), 1962, in which he argued against bureaucratic clichés. He also studied the theory of translation and wrote one of the most influential books in this field, “The High Art” (“Vysokoye Iskusstvo”), 1968.

In the 1960s Korney Chukovsky started an adaptation of the Bible for children. He involved a number of writers in the work and carefully supervised and edited what they did. The project was a very difficult one because of the anti-religious stance of the Soviet government. The book, called “The Tower of Babylon and Other Ancient Legends” (“Vavilonskaya bashnya i drugiye drevniye legendy”), was published in 1968, but all the copies were destroyed by the government. The first time the book became available to the public was in 1990.

Korney Chukovsky died on 28 October 1969 of viral hepatitis in his country house in Peredelkino in the Moscow region, where he had spent most of his life and where a museum in his name is now located.