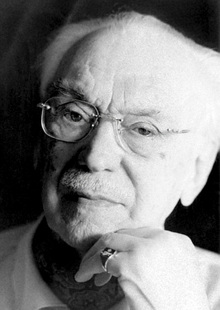 Father Vladimir Mikhalkov received a legal degree but then unexpectedly changed his interests to poultry breeding and made an outstanding career in this field. The family had deep boyar roots though Sergei Mikhalkov never mentioned it until recently. Which was wise for someone who wanted to live a long and happy life in Soviet Russia.

Sergei Mikhalkov very early showed interest in literature and especially in poetry. At the age of 9 he wrote “A Tale of a Bear” and offered it to the Mirimanov's publishing house which specialized in literature for children. He got his first author's emoluments for it, but the poem was never published. Still he kept sending his poems to editors, and in 1928 his short poem was first printed in a provincial magazine. It was a beginning of an extremely successful literary career.

Starting 1933 the young poet was constantly present in the most reputable Soviet papers and magazines. But a real boost of his career happened when he published a love poem “Svetlana” which was read by Stalin, liked

by the dictator and mistakenly took by him as a dedication to his daughter Svetlana Stalina. Soon after that Mikhalkov was offered all kinds of support in his creative work. He was asked to write a number of poems for children. The is when he created “Uncle 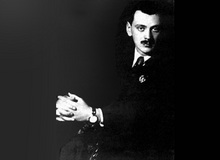 Styopa”, the character known by literally everyone in the Soviet Union and Mikhalkov's trade mark. Somehow he liked writing for children and became the leading Soviet children's author.

Another Mikhalkov's trade mark, the adult one, was lyrics for the Soviet anthem. Actually he is the author of three revisions of the anthem. The original one was written by him and his friend poet El-Registan in 1943. The second revision of the lyrics was needed to eliminate any mention of Stalin. And the third one appeared when the new Russian authorities decided to substitute Glinka's music back to the old Soviet tune in 2000. Sergei Mikhalkov is probably the only poet in history who managed to create three revisions on national anthems of two countries.

Besides poems and songs Sergei Mikhalkov wrote a large number of theatre plays and movie scripts. All of them have been staged and filmed, and most of Russians over 30 now have seen and liked them probably without realizing who the author is. 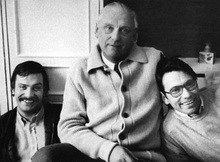 Image from www.nchtdm.com
Sergei Mikhalkov is happy both in his literary and personal life. His first wife Natalia Konchalovskaya, daughter of prominent artist Petr Konchalovsky and grand daughter of great Russian painter Vasiliy Surikov was both a beauty and a gifted writer. She gave birth to two Mikhalkov's sons Nikita and Andrey (Konchalovsky) who both became famous film directors. Seven years after the death of Natalia Konchalovskaya in 1988, Mikhalkov married a second time, to Julia Subbotina who was 40 years younger than the groom.
Mikhalkov has always been on good terms with country leadership. His work was highly appreciated by the Soviet and modern Russian authorities. He was a multiple laureate of the highest state awards and prizes. 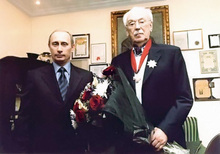