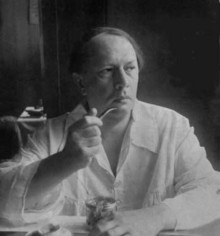 Aleksey Nikolaevich Tolstoy was a Russian (and later Soviet) novelist, playwright, historian and short story writer. A former nobleman, he immigrated to Western Europe after the Bolshevik Revolution but returned to USSR in 1923. Nicknamed “Comrade Count” he was a supporter of the Communist Party, an honored artist and the recipient of three Stalin Prizes.

Aleksey Tolstoy was born in the town of Nikolaevsk (now Pugachyov), in the Samara Region. He was distantly related to Leo Tolstoy on his father's side, but he never stayed associated with the Tolstoy clan. He grew up without knowing his real father, Count Nikolay Tolstoy, who was a member of the elite of Russian society and a wealthy landowner. His mother, Aleksandra Leontyevna (nee Turgeneva) while pregnant with Aleksey, left his father and ran off with Aleksey Bostrom to a farm in the Samara Region. Although he was officially registered as the son of Count Tolstoy, until the age of thirteen Aleksey lived under the name of Bostrom and never suspected that Aleksey Bostrom was not his biological father. Even after learning the truth, he continued to consider Aleksey Bostrom his true father and refused to see Count Nikolay Tolstoy or his older siblings. In 1900 Count Nikolay Tolstoy died, having left his estranged son an inheritance of 30,000 rubles and an ancient name. According to biographers, this itself is a testimony to Nikolay's paternity, as a Russian nobleman of the time would never have left such an inheritance to another man's child.

Aleksandra Leontievna herself was a writer. She was the author of the novel “Irrepressible Heart,” the tale “In the Backwaters” and several children's stories. At her urging, Aleksey wrote his first story at the age of 10, a tale of a young boy named Styopka. Nothing remains of this story save for one phrase: “The snow in the moonlight shone like diamonds.”

In 1897 Bostrom was forced to sell his land and the family moved to Samara. In 1901 Tolstoy moved to Petersburg and entered the Petersburg Technological Institute. Soon he became involved in Social-Democratic organizations and took part in student demonstrations and strikes. In 1903 he was almost killed when he was hit in the chest with a pavement stone thrown during a demonstration at the Kazan Cathedral. 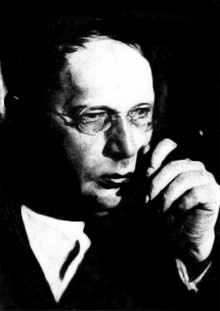 In June 1902 the nineteen-year-old Aleksey married Julia Rozhansky, the daughter of a provincial doctor, who was also studying in St. Petersburg. After several years of marriage, Aleksey traveled to Dresden, Germany, where he met Sophia Dymshits, the sister of Leo Dymshits, his friend and fellow student. Aleksey was instantly smitten and, desiring to protect his sister's reputation, Leo Dymshits immediately fled with her back to St. Petersburg. Aleksey, however, was not put off. He also returned to St. Petersburg and began to openly pursue Sophia at her parents' home. Although hopelessly in love, Sophia was well aware that they were both still married to other people. Therefore, she suggested that Aleksey take a trip abroad with his wife before coming to a final decision. After a trip to Italy in the summer of 1907, Aleksey left his horrified wife and infant son and entered a common law relationship with Sophia.

When the Institute was closed in 1905, Tolstoy went to study at the Polytechnic Institute in Dresden, where he wrote some revolutionary and lyric verses. He returned to Samara in 1906, but his mother soon died and Tolstoy left again for Petersburg to continue his studies.

Tolstoy’s tribulations in his family life were to continue. On a holiday in the Crimea in the spring of 1914, Aleksey became greatly attracted to a young ballerina, Margarita Kandaurova. The break with Sophia was as abrupt as it had been with Julia. Out on a stroll, he said significantly, “I feel that this winter you're going to leave me.” Sophia did not reply, but took the hint and departed for a visit to Paris. Their infant daughter, Mariana, was deposited with an aunt. The outbreak of war in August caused Sophia to return to Russia, but though his seventeen-year-old ballerina soon left him, Aleksey and Sophia lived separate lives thereafter. Mariana, however, came to live with her father two years later. By December, Tolstoy had established himself with another mistress, Natalya Volkenstein, who was separated from her husband. They did not marry until after the February Revolution of 1917, with the end of the Imperial Russia, as Natalya was unable to secure a divorce before then.

Tolstoy’s literary experiments were born under the influence of the Symbolist movement, but from poetry he soon turned to prose. In 1907 Tolstoy published a collection of symbolist poems entitled “Lirika.” Among his early works were some realistic short stories depicting his childhood. As a writer Tolstoy made his appearance with a series of historical novels. In them he explored the impoverishment of the noble family estates and the spiritual decline of their owners. His second volume of verses, “Beyond Blue Rivers,” was largely based on folklore, in particular Slavic mythology.

His first prose work, “The Old Tower,” appeared in 1908. It was followed by “The Competitor,” “Arkhip” and some others. Of those early works Tolstoy wrote, “I began with imitation. That is to say, I had already felt out on what type of canvas, along what type of path I could direct my creative endeavors. But still, the road was someone else's, not mine.” 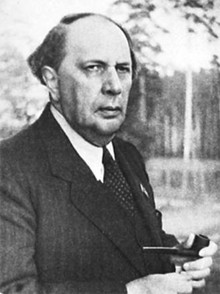 Tolstoy also tried himself at drama. The play “Aggressors” was staged in Moscow in 1913. It evoked a sharp reaction among the public and was banned by the Tsarist authorities. Between 1914 and 1917 Tolstoy penned five more plays, among them “The Shot,” “Evil Spirit” and “Bitter Color.”

Following the October Revolution of 1917, Tolstoy produced the story “Peter's Day,” portraying an average day in the life of Tsar Peter the Great. In the piece, the Tsar is pictured as a crude, coarse, capricious, bestial, barbarian despot.  "Peter the First" (1929-45, book 1-2) was a historical novel, which made a strong comeback in the 1930s. It presented the view that that Peter the Great was simply a progressive ruler who only made Russia stronger, while also having a heart for the people. Finally, Tolstoy's screenplay for the lavishly produced film version in 1937-38, directed by Vladimir Petrov, justified Peter's interest in imperial expansion. “Peter the First” was hailed as the best Soviet historical novel ever written, also in the West, perhaps due to its apolitical views. Tolstoy never managed to finish the third part of the book before his death. In his last writings “The Eagle and Its Mate” and “The Difficult Years” of the Ivan the Terrible series, Tolstoy idealized the Tsar and then drew parallels between the emperor and Stalin. In Tolstoy's “Ivan the Terrible” the Tsar is portrayed as a heroic figure, an idea used by film director Sergey Eisenstein in his monumental film of the same title (1945-46). The second film, “The Difficult Years,” focused on Ivan's activities as a statesman. Stalin especially disliked this production, although the first film won a Stalin Prize.

Between the years 1914 and 1916, during World War I, Tolstoy served as a war correspondent on the front and later in England and France. Tolstoy's war experiences formed the background for the collection of stories “On the War” (1914-16). In 1917 Tolstoy worked for General Anton Denikin's propaganda section. At the time the Romanov Dynasty was replaced by Aleksandr Kerensky's Provisional Government. Aleksey Tolstoy at first despised the Bolsheviks and once vowed to put out the eyes of Lenin and Trotsky if they fell into his hands. As a result, he sided with the White Army during the Civil War that followed the October Revolution. After the defeat of Pyotr Wrangel's Army in 1920 – Wrangel was one of the major figures of the White movement – the Tolstoys were evacuated from Odessa and settled in Paris as White émigrés.

A few years later they moved to Berlin where Tolstoy joined a pro-Communist émigré group and became the editor of the Bolshevik newspaper On the Eve.

In Paris Tolstoy began “Nikita's Childhood,” a partly autobiographical study of a young boy's life. It was also in Paris that he started “Sisters,” the fist novel in his trilogy that tells the story of Russian intellectuals who convert to Bolshevism during World War I.

After an uneasy period, when he was suspected because of his aristocratic origins (a common thing during that time), Tolstoy established himself among the leading Soviet writers. During the 1920s he wrote several plays, including adaptations of works by the American Eugene O'Neill and the Czech Carel Capek. He participated in anti-fascist congresses in Paris and London in 1935-36 and took part in the 2nd International Congress of Writers in Madrid during the Spanish Civil War in 1936.

That same year he was elected Chairman of the Writer's Union and in 1937 he became a Deputy to the Supreme Soviet. Two years later he was elected a member of the Soviet Academy of Sciences. During World War II he served as a journalist and propagandist. On the day the Great Patriotic War began, Tolstoy wrote the last lines of his novel “Gloomy Morning,” the final installment in the “Road to Calvary” trilogy, which was now deemed worthy of a Stalin Prize.

He wrote numerous children's stories, including "The golden key" or "The adventures of Buratino".