They came from two different worlds – Dmitry Pozharsky belonged to the aristocracy and Kuzma Minin reportedly was the son of a salt producer.

But because of their achievements in Russia’s struggle for independence from the Poles, these two figures managed to go down in history – together.

The beginning of the seventeenth century was a time of great uncertainty in Russia. Following the death of Tsar Boris Godunov in 1605, Polish troops constantly invaded Russian lands and supported the False Royalty’s strive towards the throne. As a result, by 1610 Polish troops occupied several Russian cities, including Moscow, and most of the territory was under the rule of Polish King Sigizmund the Second.

The first uprising occurred in February 1611. A more than twelve-hundred-men army made its way 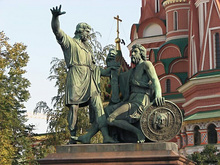 from the city of Nizhny Novgorod to free Moscow from the invaders. This is when Dmitry Pozharsky first demonstrated his skills in combat. Coming from a respected family, Pozharsky was close to the throne during the rule of Tsar Boris Godunov, which made him quite an influential figure among Russia’s elite. With help from the Muscovites, who blocked the city’s streets and attacked Polish soldiers, the militia became a real threat to the occupiers. The Poles decided to burn the city to the ground but even such extreme measures couldn’t stop the people’s fight for independence. Unfortunately, Dmitry Pozharsky was seriously injured in combat and had to flee the city to recover, leaving his main goal - the freeing Moscow - unachieved.

In June 1611 several Russian cities were preparing a new revolt against the Poles. Nizhny Novgorod once again became one of the centers of the resistance movement – its residents were constantly meeting to decide how and when to rise against the occupiers. Kuzma Minin, the head of one of Nizhny Novgorod’s districts at the time, was gaining more and more influence with his ideas on how to get rid of the occupiers. Minin 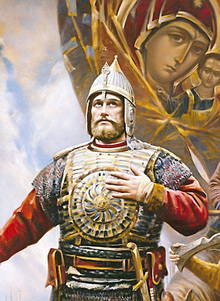 suggested every resident should devote one third - or in some cases one fifth - of their belongings to form a militia. Part of his plan was the idea that those who didn’t comply with these rules would be enslaved and their property would be fully taken away.

These harsh measures were supported by the majority of residents and soon a new movement for independence was formed, including the recovered Count Dmitry Pozharsky and his troops.

By early April 1612 an impressive army headed by Minin and Pozharsky was on its way to Moscow. As the movement reached the city of Yaroslavl, the Poles tried to assassinate Pozharsky, but the Count survived and the army

continued to move towards Moscow. On 20 August they finally reached the occupied city. For the next four days Minin and Pozharsky and their troops took part in a bitter battle to free Moscow from the Poles. The situation was worse than during the first revolt since this time Polish troops were backed by Lithuanians who were called in for help by Poland’s King Sigizmund the Third. Nevertheless, by the end of 24 August the occupiers were fully crushed and the remaining Polish troops were fleeing the city.

After many disputes in 1613 led by Pozharsky, Mikhail Romanov was chosen to become the next Tsar, as he was distantly related to one of the previous Tsars – Ivan IV Terrible. On the day after the enthronement, Kuzma Minin was awarded a noble title.

Many historians say he was trusted and respected by the rulers and was in charge of major projects in Russia until his death in 1616.

Count Dmitry Pozharsky remained close to the throne for the rest of his life as well, which ended in 1642. A well respected military and political figure, even when Pozharsky turned 60 (quite an advanced age in those days), the Tsar wouldn’t let the Count retire, allegedly explaining that he needed to have someone to whom he could entrust the most difficult tasks and be sure of their timely fulfillment.

Even though Kuzma Minin and Dmitry Pozharsky died at a different time and were buried in different places, a joint monument to them at the Red Square in Moscow reminds Muscovites and visitors of the city of the great deed these two men did for Russia’s sovereignty.