Prominent Russians: Fyodor I “The Bellringer” 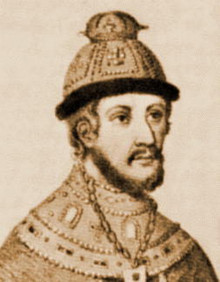 In 1584 the 27-year-old Fyodor I was crowned Tsar of Russia. He was a son of Tsar Ivan IV, better known as Ivan “The Terrible” and his first wife, Anastasia. In Russian documents, Fyodor is sometimes called “the blessed”. He was born in Moscow and crowned Tsar and Autocrat of all Russia at the Assumption Cathedral in Moscow on 31 May, 1584.

At that time Russia had been exhausted by the bloody fanaticism of Ivan IV, whose insane temper led him to kill his elder and abler son. Fyodor, his younger brother, ascended to the throne, only to find his realm torn wide open by factional infighting among the boyars, headed on the one hand by his imperial chancellor, Boris Godunov, and on the other by Prince Ivan Petrovitch Shuysky.

Fyodor was said to have been a very weak leader. He left the governing to his brother-in-law Boris Godunov, who then became the real leader of Russia. Ascending the throne in 1584, three years after Fyodor’s father killed his older brother Ivan in a fit of rage, Fyodor Ivanovich was nevertheless too mentally deficient to govern. Gentle and quiet Fyodor was believed to have been a mentally retarded weakling who lacked the intelligence to rule. Ivan IV, too, perceived that his son was ill-equipped to be Tsar, and anticipating his own death, Ivan tried to smooth the path for his “humbly gifted” son by creating a five-member advisory council to help him rule. According to the last order of Ivan IV, a regency council including five boyars (the Tsar's uncle Nikita Romanovich Zakharin-Yuryev, Prince Ivan Fyodorovich Mstislavsky, Prince Ivan Petrovich Shuysky, Bogdan Yakovlevich Volsky and Boris Fyodorovich Godunov, the brother-in-law of the Tsar) was formed to support the incapable Tsar Fyodor. With two opposing camps vying for power, a collision was inevitable. In the beginning Zakharin-Yuriyev, supported by the Moscow nobility and population, tried to reconcile Princes Shuysky and Mstislavsky –  who were servicemen –  and promoted by Ivan IV Belsky and Godunov. But Belsky immediately started a dangerous game of political intrigues. Then, on April 2, 1584 public disorder in Moscow was incited against him and he was removed from his post, being sent to take the helm of Nizhny Novgorod instead. In the end of the same year Yuryev fell ill. That worsened antagonism between Boris Godunov and Shuysky considerably. Godunov was strongly supported by the bureaucracy headed by Duma clerks Andrey and Vasily Shchelkalovy, adherents of a strong centralized state. That allowed Godunov to get rid of one more rival Miloslavsky, who was ultimately cloistered in the Kirillo-Belozersky Monastery in 1585. 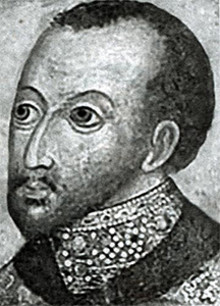 In 1586 leaders of the Shuyskys boyar clan tried to arrange a divorce of Tsar Fyodor (under the pretext of bareness of Tsarina Irina) thus trying to discharge Godunov. For that task they relied on the Moscow population. Boris managed to suppress the disorders that arose in the capital in May 1586. Shortly thereafter Shuysky and his brothers were first banished to their ancestral lands, and then brought to Kargopol, where they were secretly killed. Thus the opposition was done away with and Boris Godunov could now publicly become the regent of the state. He was entitled “the Governor, Servant and the Equerry Boyar and the Court Voevode”. The Duma empowered him with control over foreign relations. The British called him “the Lord-Protector of Russia”.

Thus Fyodor’s brother-in-law, Boris Godunov (the brother of his wife Irene), ruled instead as regent. After almost twelve years of marriage, Tsaritsa Irina gave birth to a daughter, Feodosia, in 1592. Feodosia died in 1594 aged two. Fyodor did not have more children and thus was the last descendant of Rurik to occupy the Russian throne. Fyodor had a young half-brother, Dmitry (1581-1591), but Dmitry's mother had been the eighth wife of Ivan IV. The Orthodox Church recognized a man's right to no more than three wives, so Dmitry was illegitimate. Boris Godunov had him banished from the capital. Fyodor genuinely loved his half-brother and wept when Dmitry was sent away to Uglich (120 km away from Moscow), but he did not interfere. In 1591 the boy died. According to one rumor, Dmitry's throat had been slit, while another said that “the boy had been playing with a knife and had fallen on the blade during an epileptic seizure.” Tsar Fyodor was greatly saddened by Dmitry's death and appears to have never questioned whether Boris Godunov was involved in his half-brother's death or not. 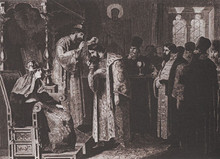 In appearance Fyodor was virtually the opposite of his father, except for their prominent nose. Ivan IV was tall and robust. Fyodor was small and had short arms and practically no neck. His spindle-legs were too weak to properly support his body and made him stoop and shuffle. His eyes had a glazed look, and his face wore a permanent guileless smile that was variously ascribed to religious ecstasy or simple-mindedness, depending on the observer's point of view. Fyodor I was thought to be feeble-minded, but his subjects considered his state as an especially inspired, childish form of wisdom. He spent most of his time in monotonous prayer, and took special delight in ringing church bells. Though the first years of Fyodor's reign were marked by a power struggle between the Princely Shuisky Family and Boris Godunov, but by the end of 1587 Boris Godunov was the only remaining member who helped Fyodor to reign. He became a substitute Tsar because Fyodor was not only unfit to rule, but also not interested in doing so. When Fyodor died peacefully in his bed in 1598 after a brief illness, the long-ruling dynasty of Rurik came to an end. Boris “Good-enough” became the new Tsar. Godunov was killed in 1605. His death ushered in a “Time of Trouble, which lasted until the establishment of the Romanov dynasty in 1613.

“The Bellringer” of the 16th century 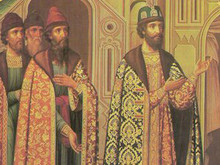 Palace of Facets, Tsar Fyodor Ivanovich among the boyars. Painting on the South wall.

In 16th century Russia ,feeble-mindedness was considered an especially inspired, childish form of wisdom, “foolishness in Christ”. The phenomenon was known as “yurodstvo” and the person exemplifying it as a “yurodivy”. Apparently Russians characteristically looked upon such persons with respect, if not with reverence. Fyodor definitely was a “yurodivy”. He spent most of his time in monotonous prayer and his only other pursuit was visiting monasteries and churches throughout his realm. He took special delight in ringing the bells that called the faithful to the mass. Because of his devoutness and his love of church services, his subjects began to call Fyodor “The Sanctified Tsar” and “The Bellringer.” The most important achievement during Fyodor's reign was the creation of an independent patriarchate of Moscow for the Russian-Orthodox Church, equal to the five old patriarchates of Rome, Constantinople, Antioch, Aleksandria and Jerusalem. Fyodor’s troubled reign was dramatized by Russian famous writer Aleksey Tolstoy in his drama “Tsar Fyodor Ioannovich” in 1868.