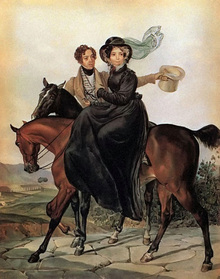 The Naryshkins are a Russian noble family that played an important role in the politics and history of the country. The representatives of the family began wielding influence and power in the middle of the 16th century when Russian Tsar Aleksey Romanov married for the second time. His new wife was Natalia Naryshkina who gave birth to Peter I, known in world history as Peter the Great, the reformer and founder of Saint Petersburg. From the time Peter I became the Russian Emperor until the beginning of the 18th century representatives of the Naryshkin family were regularly appointed to important court and state positions. An architectural and artistic style popular in the late 17th – early 18th century was named in honor of the Naryshkins.

Among the most outstanding representatives of the family is Kirill Naryshkin. Born in 1686, he started his career in the suite of Peter I. The tsar presented with him a village as gratitude for his service. In 1695-1696 during the Russo-Turkish war Kirill Naryshkin participated in Azov military campaigns. Afterwards he became the voevode (provincial governor) of Pskov. Kirill Naryshkin was among those associates who helped Peter the Great found Saint Petersburg. In 1703 when the Peter and Paul Fortress was erected one of the bastions of the fortress was named in honor of Naryshkin. It still bears the name of Peter’s associate. In 1710 Kirill Naryshkin was appointed the first town mayor of Saint Petersburg, and he remained such until 1716. In January 1716 Naryshkin was promoted to the position of Moscow governor. But he couldn’t get along with the Senate - the legislative, judicial, and executive body of Russian Monarchs instated by Peter the Great. The contradiction between Kirill Naryshkin and the Senate was so severe that the Senate took away the courtier’s villages and other property. Still, Kirill Naryshkin remained in power. In 1718 he was one of the judges in the trial against the son of Peter the Great, Aleksey, who was accused of intending to dethrone his father. The signature of Kirill Naryshkin can be found on Aleksey’s death sentence. 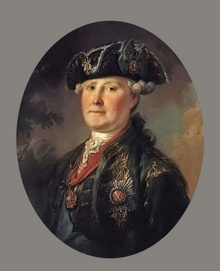 Kirill Naryshkin died in 1723. His son, Semyon Naryshkin (born in 1710), was a very well educated man. Following his father’s example, Semyon planned on a court career. His intentions broke when Peter the Great died in 1725. The next emperor, Peter II, was too young to rule the country and he died at the age of 14. In 1730 the Russian throne was taken by Empress Anna Ioannovna who wanted to get rid of Peter the Great’s associates. The Naryshkin family fell into disfavor and Semyon Naryshkin left Russia. He lived in France where he made friends with Didrot the philosopher and Falconet the sculptor. When the daughter of Peter the Great, Elizaveta, ascended the Russian throne, Naryshkin was appointed ambassador to England. He returned to Russia in 1743 having great confidence in Elizaveta’s grace. In 1744 Semyon Naryshkin was afforded the honor of meeting the bride of the heir to the Russian throne, Grand Prince Peter (known as Peter III). That lady was the future Empress Catherine the Great. Semyon Naryshkin is known for his luxurious way of life. He was very rich, and when he married beautiful Maria Balk-Poleva he doubled his fortune. His wealth allowed Naryshkin to create a home orchestra and a home theater that was often attended by Empress Catherine the Great. Semyon Naryshkin, who had been treated kindly and awarded with governmental bonuses, died on 27 November 1775 in Moscow.

Peter Naryshkin was also among the glorious members of the family. Born in 1764 into a family of guards majors, he made a quick public career. Peter Naryshkin began serving in the guards and participated in the Russo-Turkish war of 1787-1791. For his military deeds and achievements Naryshkin was awarded the Order of Saint George. It was a very honorable decoration. Later, Peter Naryshkin, the war hero became a member of the Senate and remained as such until his death in 1825. 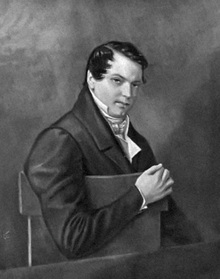 While many representatives of the Naryshkin family were faithful to Russian monarchs and spent their lives serving at court, still there was one freethinker who went against power. His name was Mikhail.

Born in 1798, Mikhail received an excellent education and served in the army in the rank of officer. Mikhail became enthusiastic about the Decembrists’ ideas. The Decembrists believed that it was necessary to limit the absolute power of Russian monarchs by constitutional regulations. The Decembrists’ revolt in Saint Petersburg was an attempt to introduce a new type of power in Russia. Mikhail Naryshkin was among those who prepared the uprising in Moscow in 1825. The revolt was repressed, and the participants of the Decembrists movement were arrested. Most of the Decembrists were officers of the Russian army. Mikhail Naryshkin was exiled to Siberia, as were hundreds of other opponents to the monarchy. After five years of hard labor Naryshkin served in the army, and in 1844 he was retired. For several years he lived at the estate belonging to his wife, Elizaveta Konovnizhyna. In 1956 Mikhail Naryshkin was amnestied and allowed to return to Moscow. He died in 1863.

Darya Saltykova Darya Saltykova, commonly known as Saltichikha made her infamous mark with the atrocious killings of her serfs. She was the epitome of boyar abuse of serfs in pre-reformation Russia.