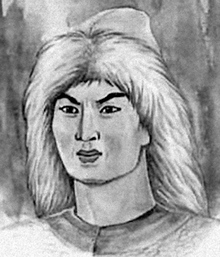 “‘My fate is my people's fate,’ having uttered these words Salavat mounted his horse and raised his threatening sword... It was a magic sword, which the aksakals [in the Turkic languages literally ‘white beard’; metaphorically male elders, the old and wise of the community] had given him.” – A passage from "Ataman Yulay, Sardar Salawat, Kinya Abyz (Historical essays about the Peasant War of 1773-1775)" by Nazir Kulbakhtin.

Salavat Yulay was the closest fellow-fighter and supporter of the Peasant Tsar Yemelyan Pugachev (one of the leaders of the Peasant War of 1773-1775) and a national hero of the Bashkir people. Having proven himself a talented military leader, at the age of 19 Yulaev headed large areas of the insurgent struggle, distributed Pugachev’s manifestos among the population, supplied Pugachev’s army with money, provisions and equipment and engaged in the mobilization of soldiers. Despite attempts by the tsarist government to present the Peasant War of 1773–1775 as “an uprising of villains” and its participants as criminals and robbers, folklore emphasizes the liberating character of the war and portrays its participants and leaders as noble fighters for justice and protectors of the oppressed.

Following the defeat of the revolt Salavat Yulaev was captured and banished to penal servitude for life at the Baltic fortress Rogervik (now the city of Paldiski in Estonia).

The Bashkirs are one of the ancient peoples of Eurasia. Historically independent, they occupied territories on both sides of the Ural mountain ridge between the Volga, Kama and Tobol Rivers and upstream of the Yaik River. After the fall of the Tatar Khanate of Kazan in 1552, the Bashkirs came under Russian sovereignty.

Various forms of exploitation by the tsarist administration led to several Bashkir revolts in the 17th and 18th centuries, the largest of which occurred in 1773, led by Salavat Yulay. Gradually the authorities began to lead a two-faced policy in Bashkortostan, officially adhering to the terms of unity, but at the same time violating them. From the middle of the 17th century, they began appropriating Bashkir lands. They built fortresses and, from the beginning of the 18th century, factories as well. By the beginning of the 18th century 31 fortifications had appeared on Bashkir lands. Surrounding areas were given to noblemen, monasteries, merchants and Russian peasants. In the second half of 17th and the beginning of 18th centuries repeated attempts were made to Christianize Bashkir Muslims. 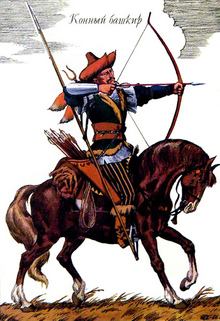 The loss of their lands and the growth of taxes and duties caused dissatisfaction among the Bashkirs. In defense of their territory and freedom, they presented petitions to the central powers and revolted repeatedly in 1616, 1662-64, 1681-84 and 1704-11. The fight was conducted in the name of defending the terms upon which the Bashkirs had joined Russia.

The Bashkirs revolted most actively in the Peasant War of 1773-1775 under the leadership of Emelyan Pugachev. The second stage of the revolt from April to the middle of July 1774 took place in the territory of Bashkortostan. Twice during the Peasant War insurgents came close to Ufa but failed to take it by storm.

Not much is known about Salavat Yulaev today. His name can be found in folktales, but some official documents containing biographical information also exist. Salavat Yulay was born in the village of Tekeevo (now Bashkortostan). The village was burned down in 1775. During the Peasant War, first in the rank of lieutenant colonel and then as a brigadier, Salavat Yulaev supervised key events, formed rebellious squadrons, fought with governmental troops, besieged and seized fortresses and settlements and erected new administrative institutions in unfettered regions. Documents exist which prove the personal participation of Salavat Yulaev in more than 20 battles and give information concerning his state-legal activity.

Yulay is also known as a poet-improviser. Salavat Yulaev’s literary heritage includes more than 500 poetic works about the struggle against oppressors, the native land, the Bashkir people and the love of a woman. 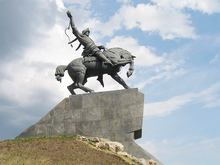 Folktales and legends about the Peasant War are an important source for understanding the history of the Bashkir people and its hero Yulay. The majority of folktales have a local character. Folktales about the renowned hero, poet and warrior Salavat Yulayev are popular in different regions but mostly in his birthplace, the Salavat Region of the Republic of Bashkortostan. Heroes of folktales were always people who took part in important historical events such as Salavat Yulayev and Yemelyan Pugachev. These heroes left traces in history, as they were known in particular regions by their deeds and distinguished by their dramatic fates. Rather illustrative in this respect is the legend “Salavat-batyr” which recounts Yulayev's fight with the Tsar Kyrmasakal. The plot of this legend is based on the traditional motif of selling a plot of land the size of a bull's hide. Of great semantic and emotive significance is the following fragment of the legend describing Salavat's meeting with the aksakals: “It’s unbearable,” the aksakals said, “we must protect our land... You are our hope, Salavat!”

Folktales of the Peasant War are not devoid of creative fantasy, as revealed to a great extent in the portrayal of Salavat’s heroic deeds; he is endowed with the traits of an epic hero.

The perpetuation of Salavat's name is a consequence of his exceptional role in the liberation movement. Even adversaries of the peasant movement such as the generals Potyomkin and Panin in their reports to Ekaterina the Great were obliged to admit that Salavat Yulayev was “the chief leader of the past uprising” calling him “glorious Salavat.”

Many things in modern-day Bashkortostan are named after Yulayev, including an avenue in Ufa, the city of Salavat, a local hockey team and the Republic's State Prize. In 1967 a Monument to Salavat Yulaev by the sculptor Tavasiev was erected in Ufa. The monument, nearly ten meters tall, is the highest horse statue in Russia. The monument’s image is also found on Bashkortostan’s emblem.