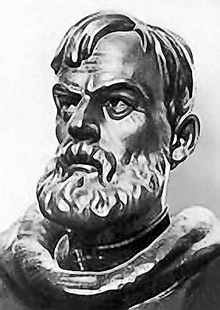 Semyon Deznyov was the Russian explorer who discovered the Bering Strait. But his discovery did not become widely known until after the time of Vitus Bering, a Danish navigator in the service of Russian Tsar Peter the Great. In 1728 Vitus Bering discovered the strait that bears his name, a body of water just 53 miles (85 kilometers) wide at its narrowest point, that separates the Asian and North American land masses. But Bering was not the first European to pass through the Bering Strait.

Dezhnyov explored Siberia in the 1640s, and in 1648 reached what is now known as the Bering Strait. Thus he confirmed that the Asian and North American continents were separated, but his findings were lost until German historian Gerhard Friedrich Muller uncovered them in 1736. By then Bering, whose 1728 voyage attracted far more attention than that of Dezhnyov 80 years earlier, had already been credited with the discovery. Dezhnyov, however, did not know what he had accomplished; nor, thanks to a number of factors, among them the tsarist secrecy concerning Russian exploration efforts, did the rest of the world.

From the time the Russian people formed a state in the ninth century, they steadily expanded their empire eastward, across the vast northern lands of Siberia, toward the Pacific Ocean. They established routes and forts along the rivers of Siberia, conquering the inhabitants of successive river valleys as they made their way toward the ocean. The new lands were steady sources of furs and mineral wealth. Such promises of new wealth spurred the Russian emperors to continue launching expeditions farther east. At the end of the 16th century Russian Cossacks established the first settlements in Western Siberia. In the middle of the 17th century there were Russian settlements in Eastern Siberia and Chukotka and on the River Amur and the Pacific coast.

During the 17th century Dezhnyov participated in several expeditions and in 1648 he opened the passage between America and Asia.

Born in 1605 in Veliky Ustyug, in the northern part of European Russia, he worked as a sailor before entering the Tsar’s service. During the 1630s he lived in frontier settlements in Siberia, including Tobolsk and Yeniseysk, collecting tributes for the Tsar from the local inhabitants. In 1638 he moved to Yakutsk, the main Russian post on the great Lena River in eastern Siberia. During 1640-41 he participated in fur-trading expeditions to the Yana River, located farther east. In the winter of 1641-42 he was a member of Cossack leader Mikhail Stadukhin’s expedition, which traveled east again, overland to the upper Indigirka River. The following year Dezhnev accompanied Stadukhin on a second expedition to the Indigirka, this time the party sailed in small boats to the river’s mouth on the Arctic Ocean. The expedition sailed eastward along the northern Siberian coast to the mouth of the Alazeya River, and from there traveled overland to the Kolyma River, which also emptied into the Arctic Ocean even farther to the east. Stadukhin established an outpost there, anxious to assert Russian control in the area. 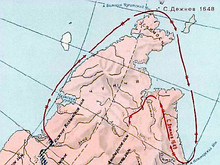 In 1647 Dezhnev was asked to take part in another expedition, this time led by the Cossack Fyodor Popov. The party’s mission was to travel by sea from the mouth of the Kolyma, around the eastern tip of Siberia and on to the Anadyr River, which empties into the Pacific Ocean. The Anadyr region was rumored to be heavily populated with walruses, which could provide a rich supply of ivory. But heavy Arctic ice forced the expedition to turn around well before they had reached their goal.

The next year, however, Dezhnyov and Popov set out for the Anadyr again. They set sail with seven ships built with very strong hulls meant to withstand the pounding of ice-filled waters. Popov had more than 100 men under his command: traders, explorers, and Cossacks like himself. The travelers departed from the mouth of the Kolyma River on 20 June 1648, not suspecting how treacherous their journey would become. By August, four of the ships and their crews had already been lost in the Arctic Ocean. But the remaining three vessels rounded the easternmost tip of Asia – what is now called Cape Dezhnyov – on the Chukotsky Peninsula. After one more boat was lost, the last two went ashore sometime around 20 September. There the travelers were attacked by the local inhabitants. Popov was wounded and Dezhnyov became the leader of the expedition.

Not long after the ships resumed their journey, Popov’s vessel was lost as well. Dezhnyov and his crew were shipwrecked off the coast of northeastern Siberia, but managed over the course of ten weeks to make their way overland to their destination. As the twenty-six survivors reached the Anadyr River, they were unaware of what they had achieved. Dezhnyov and his men had become the first Westerners to sail through the narrow passageway that separates Asia and North America, answering a key geographical question of the time: were the two continents joined? Seekers of the Northeast Passage, a northern water route from Europe to the East, were uncertain whether the two landmasses were connected and if their quest to find an Arctic sailing route was hopeless. But because Dezhnyov kept no records of his journey and word of his discovery did not make its way back to Europe, eighty years would pass before the nature of Siberia’s coastline would at last be confirmed. In 1728 Vitus Bering, would sail through the same passageway in which Dezhnyov and his men had traveled, approaching it from the south, by way of Siberia’s Pacific coast. The passageway would be called the Bering Strait in the Dane’s honor. 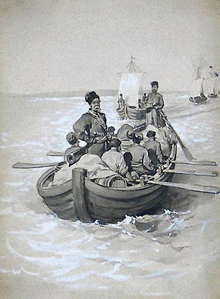 Dezhnyov and his men were forced to spend the winter of 1648 at the mouth of the Anadyr. Some members of the party tried to travel up the river on foot, and perished in the bitter cold. Dezhnyov and his remaining crew of twelve men built a boat, and when summer arrived, they sailed up the river, stopping halfway to build a camp. This became the fort of Anadyrsk, which would later serve as a major base for further Russian advances into eastern Siberia. In the river valley, Dezhnyov and his men encountered the Anual people. Like many Cossack leaders before him, Dezhnyov claimed the territory for the Tsar and forced the native inhabitants to give him goods, such as furs and ivory, as tributes to their new ruler. When some members of the Anual tribe refused Dezhnyov’s demands, he used the cruel Cossack methods of kidnapping and imprisonment to force their submission.

In 1652 Dezhnyov and his men traveled to the Gulf of Anadyr, where they came upon several walrus rookeries (breeding grounds). The animals provided them with a steady supply of ivory and hides. Dezhnyov spent the next ten years exploring the area, and collecting more tributes for the Tsar. When Dezhnyov was finally relieved of his command in 1662, he traveled overland to Yakutsk. With him was a treasure trove of silver, luxurious sables and other furs, and more than two tons of walrus tusks.

By 1664 Dezhnyov had made his way to Moscow, bringing with him the riches he had collected during his travels. He presented most of the goods to the Tsar, but kept some for himself, which made him a wealthy man. He gave a detailed account of his various adventures in the Siberian wilderness, and he received payment for his nineteen years of service on the Russian frontier. He was also made an ataman, or Cossack leader. Dezhnev returned to Yakutsk with his nephew and remained in the area from 1665 to 1671, serving as a commander on the Olenek River for most of that time. Following a brief command on the Vilyui River, he was put in charge of a fur shipment, and accompanied it to Moscow. He remained in the city until his death. When he was over 60 years old, the old wounds received during his service at the borders of Russia and hard toil undermined his health. Following a severe illness Dezhnyov died in Moscow in 1673.