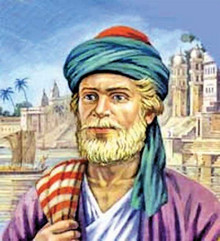 Afanasy Nikitin was a Russian merchant and one of the first Europeans (after Niccolò de' Conti) to travel to and to document his visit to India. He described his trip in a narrative known as the “The Journey Beyond Three Seas.”

From the city of Tver to India

It is believed that the first Russian traveler to visit India was the Tver merchant Afanasy Nikitin – according to some sources, he was born in 1433. It is unknown exactly when the Tver merchant began his famous journey. Some historians believe that it started in 1466, others - in 1468.

Afanasy Nikitin decided to join the Moscow embassy mission that was heading to Shirvan, the territory of modern Armenia and Azerbaijan, to sell his goods there. But not far from the outflow of the Volga River the ambassadorial merchant caravan was robbed by Astrakhan Tatars and Nikitin lost almost all of his goods. Further along the way, a storm broke one of the ships into pieces and Afanasy lost the rest of his belongings. With no money Nikitin reached Derbent (today the modern Republic of Dagestan, in the south of Russia).

Visiting India, Afanasy Nikitin was unpleasantly surprised by the color of the skin of the locals and their almost complete lack of clothing.

"I met many Hindu people," Nikitin said, “and told them about my faith, that I am not a busurman (an ancient Russian word that usually refers to non Christians and invaders, mostly Tatars and people from central Asian nations). I told them that I was Christian. So they didn’t hide anything from me, neither their food, nor trade, nor their prayers and their wives. I asked all about their faith, and they told me: we believe in Buddha. There were 84 religions in India but all believed in Buddha."

He also noted: "Here in Indian country people walk naked and their heads are not covered, breasts are bare, children are born every year and they have a lot of them. The men are all black. Everywhere I go there is a crowd behind me looking curiously at a white man ... "

Nikitin spent more than two years in India traveling to different cities, getting acquainted with local residents and carefully describing everything he saw. The notes of the merchant were compiled in the form of a so-called "Journey," that is more like a traveler’s log. This work accurately described the nature and political organization of India as well as its traditions, lifestyle and customs. 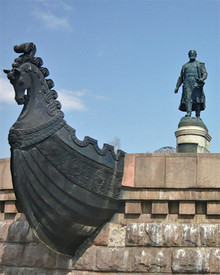 A monument to Nikitin in Tver

Some time later the merchant began to feel nostalgic. In 1471 (according to another version - in 1474), Nikitin headed back home but he couldn’t make it. Apparently, his health was undermined by the long journey. In 1472 (or 1475) he died near Smolensk.

A few years after his death his unique writings were transferred to Moscow where they were saved and rewritten.

In 1955, in the city of Tver, the homeland of Afanasy Nikitin, a monument was erected to commemorate him.