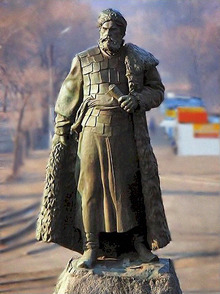 Khabarov was born into a peasant family in Veliky Ustyug, a city in the north of Russia. Growing up he was influenced by the examples of other peasants who had become merchants and made great gains through trade. It is very likely that young Khabarov had similar ambitions and did not see his humble origins as an obstacle to making a name for himself or earning a fortune.

He started his career by managing salt works for the famous Stroganov merchant clan. However, he wanted to become a merchant himself and knew that he would have to claim new territories to find his niche in business. He and his brother made their first attempt to pass the Urals in search of Siberian treasures. Their daring trip was rewarded as they reached the city of Mangazeya, which was a center for fur trading on the eastern side of the Ural Mountains.

In 1632, Khabarov left his family and moved to the Lena River. Here he hunted animals for fur and fulfilled his dream of becoming a trader. Khabarov also traded salt, a treasure valued almost as highly as gold back then. Soon he was making very good profits, and set up his own hunting cartel, which brought him a stable income for many years. Perhaps it was his desire for gain that had instigated his explorations, but whatever the case, Khabarov moved further and further east, carefully mapping out his routes.

Expeditions to the Amur river

Khabarov was haunted by the Amur River. It was populated by the Daur tribes, and the fame of their riches had spread far beyond their land. If he could conquer them, he would find the kind of wealth, the “old” world simply didn’t possess anymore. In 1649, Khabarov organized an expedition to survey the Amur, personally sponsoring his venture. Although skilled in hunting and trading, the Daurs’ military might did not boast sophisticated weapons and was no match for Khabarov. They proved to be an easy target and he decided to return with reinforced troops and conquer the land.

The following year Khabarov went on his second expedition. This time he took the town of Albazin, where he set up a base. Khabarov and his men stayed there for a year, traveling up and down the Amur, collecting tribute, which they sent to Yakutsk, the capital of the region at the time.

In 1650 and 1651, Khabarov launched further assaults against the Daurs, expanding Russian control over the area, but with great violence. Sergey Bakhrushin, a Russian historian, who studied Siberia, writes the following about Khabarov’s conquests: “Khabarov explored the Amur River during the summer and collected tribute in winter. He ravaged and looted the Amur region for three years, but it still stood strong against Khabarov.

He was very cruel to the people he conquered – that kind of cruelty is cultivated by years of dangerous military service and the absence of any moral principles. At one time he ordered all captive men to be drowned in the river while women and children were taken captive, their possessions looted. He turned them into his slaves, but many ran away from the harsh treatment, and those who survived were later killed by him. He devastated the Daurs, however, to maintain Russia’s authority over the conquered territories Khabarov needed military support from the government.”

History has preserved Khabarov’s letters to the governor of Yakutsk with a detailed description of Amur. “The area downstream of the great Amur River is inhabited by the Daur people, who feed off land and cattle. The great River Amur is full of sturgeon and many other fish that can’t be found in the Volga. The cities and villages have vast pastures and the forests along the river are great and dark, full of sables and other beasts… And the earth is full of gold and silver.” At the time Khabarov had no idea of the true value of his conquests and the countless treasures of the land. During his trips he drew a map of the Amur River, which became the first European map of the region.

In 1651 Khabarov almost started a war with China. South of the Daurs were the disputed territories that China had considered its own. The Daurs decided to seek protection from the Chinese and appealed for their assistance. The Manchu Dynasty, which had recently come to power, attacked Khabarov in the town of Achansk in the spring of 1652. Khabarov's garrison was forced to withdraw. Because of that, Russia and China engaged in many frontier struggles until the signing of the Treaty of Nerchinsk in 1689. 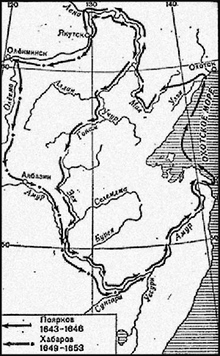 Soon Tsar Aleksey Mikhailovich appointed a new governor to rule the Amur region – Dmitry Zinovyev. By that time there were many reports and complaints about Khabarov’s cruelty, greed and dishonesty. Allegedly, he exaggerated the value of the Amur region in order to motivate the Tsar to send troops to support Khabarov’s ventures. Zinovyev was to survey the Amur and investigate Khabarov’s actions.

Apparently his findings were enough for him to arrest Khabarov and confiscate his possessions – he was sent to Moscow for further prosecution. Khabarov was outraged and wrote a letter to the Tsar mentioning the brave conquests in his name, how much blood he had shed and pain he had endured on those expeditions. The Tsar appreciated Khabarov’s exploits and acquitted him. Moreover, he ordered all his possessions to be returned to him and granted him the noble title of boyar. Khabarov was also appointed governor of several villages along the Lena River.

When Khabarov returned, he sought permission for another expedition in 1667, but was denied it. After those events, history is full of rumors about Khabarov’s last years. According to some, he spent the rest of his life in a village along the Amur River and died in 1671 at the age of 70.

The memory of the great Amur explorer lives on in the biggest city standing at the junction of the Amur and Ussuri rivers – Khabarovsk. Located near the Chinese border, Khabarovsk is an industrial and transportation center on the Trans-Siberian Railway, and a river port. Khabarov’s tall statue at the central railway station overlooks the territory that he annexed to Russia.