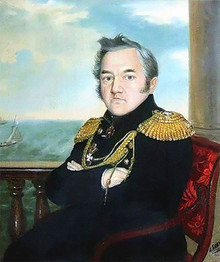 Mikhail Lazarev was a Russian sailor and explorer. In 1819, he led a South Pole expedition in the capacity of ship commander. At that time, he did not know that this fateful expedition would discover the continent of Antarctica.

Lazarev was born into a senator’s family. When he was nine, his father Pyotr assigned him and his siblings to the Navy Cadet Corps. Three years later, Pyotr died, and Mikhail and his brothers were enlisted as cadets.

Lazarev turned out to be a talented sailor, so at the age of fifteen he was sent to Great Britain to resume his studies as a sailor in the British Navy. He spent the next five years sailing in the Atlantic Ocean and the Mediterranean Sea, took part in several skirmishes with French pirates, and returned to his home country an experienced and responsible mariner. After his return, he was promoted to the rank of midshipman and assigned to the Baltic Fleet. In this capacity, the young Lazarev took part in two wars in a row: The Russian – Swedish war of 1808-1809 and the Patriotic War against Napoleon in 1812.

In 1813, the Russian-American Company approached the Russian Naval ministry with a request; they were in search of a commander for their newly built ship, the Suvorov,  named after the Russian military leader. This vessel was to sail round the world for trading purposes. Lazarev was assigned to the Suvorov and performed his mission successfully. He sailed to Alaska and back, and on his way discovered a group of islands in the Pacific Ocean. The islands were named The Suvorov Atoll. 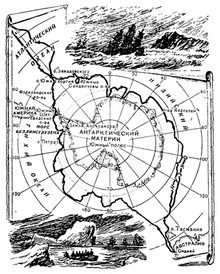 Route of the expedition to Antarctica

In 1819, Lazarev was assigned to the South Pole expedition headed by Faddey Bellinsgauzen as a commander of the sloop Mirny. The aim of the expedition was to find Antarctica. In those days, the sixth continent was nothing more than a legend: forty five years earlier, the famous sea captain James Cook attempted to approach it, but was unsuccessful and concluded that Antarctica was either non-existent or unreachable.

On January 16, 1820, Bellinsgauzen’s expedition proved Cook wrong, and it was Lazarev who saw the ice-covered shore of Antarctica first. Not only did Lazarev and Bellinsgauzen approach the continent: they sailed around it to define its shape. During the same 751 day journey they also discovered 29 islands in the Pacific Ocean.

After his return, Lazarev was promoted to the rank of Lieutenant – Captain and given command of the destroyer Cruiser. On the Cruiser, Lazarev sailed around the world for the third time in his life, gathering meteorological, biological, and ethnographic information about the Pacific and the Atlantic Oceans. For these explorations, he was decorated with the order of St. Vladimir.

In 1826, Lazarev was assigned to command the destroyer Azov. A year later, he led a squadron sent to the Mediterranean Sea to fight the Turkish Fleet. Greece, which had been occupied by Turkey, was trying to expel the Turks, and Russia, Great Britain, and France sent their fleets to help it.

On October 8, the squadron approached the Greek shores and sent truce envoys to the Turkish command in the hopes of negotiating. However, their hopes appeared to be fruitless: the Turks executed the envoys and attacked.

Lazarev’s vessel was attacked by five enemy ships at once. In first minutes of the combat, the Azov seriously damaged an 80-cannon Turkish ship, and then destroyed the other attackers one by one, after which it rushed to support the British squadron. In this battle, both the commander and the crew showed great courage. The British who witnessed the Azov in combat admitted that no British ship had ever fought like it, even in the Battle of Trafalgar.

By the end of the day, the Turks were left with no fleet. The Azov had 153 holes in her hull and had lost all her masts. In a letter to his friend, Lazarev admitted, “I have no idea how I came out alive”. For his victory, Lazarev was promoted to a rank of Rear-Admiral. The crew of the Azov received the highest naval award of the Russian Empire, St. George’s Banner.

The war continued in 1828 – 1829. Lazarev commanded the Russian squadron which blocked the Dardanelle Gulf. When the peace treaty was signed in 1829, his vessels returned to the port of Kronstadt without calling at any foreign ports. 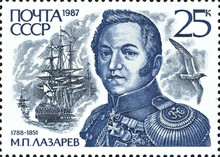 In 1832, Lazarev led the Black Sea Navy staff, and a year later had to fight on the same side as the Turks. Occupied Egypt had risen against Turkey, and Nicholas I decided to support his former enemy. With the help of the Black Sea squadron, commanded by Vice-Admiral Lazarev, the Egyptian uprising was suppressed and the Russian Empire won 20 years of peace with Turkey.

After his return, Lazarev was promoted again to the rank of Admiral and main commander of the Black Sea fleet, serving for eighteen years at this position.

On one of his rare visits to St. Petersburg, Mikhail Petrovich accidentally met the young daughter of another Lieutenant - Captain in retirement, Catherine von der Flitt. The acquaintance struck him greatly and the next day Lazarev went to her father to ask for his permission to propose marriage. A few days later all was settled and the two happily tied the knot. Catherine Timofeevna and Mikhail Petrovich had five children.