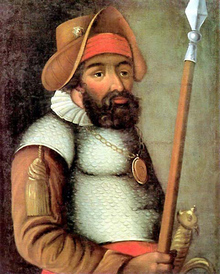 Yermak Timofeevich has been called the Christopher Columbus of Russia for his conquest and annexation of Siberia, which, after the defeat of the Golden Horde, was the most significant event in Russian history before the rule of Peter the Great. The territory of Siberia was several times greater than that of Russia at that time and was a treasure box of natural resources, supplying the needs of the entire country to this day. Yermak’s conquest of Siberia also opened the Pacific coast to Russia and led to the discovery of the Bering Strait separating Asia from North America.

Very little is known about Yermak’s background and place of birth. History hasn’t even preserved his last name – Timofeevich is his patronymic.

After his death there were many towns vying for the title of Yermak’s birthplace. According to different sources he could have been born either in Russia’s north, along the Dvina River, in Central Russia near the Kama River or along the Don in southern Russia.

What is known about his early life before the conquest of Siberia is based mainly on rumor. One fact is certain though – Yermak was a Cossack, which means he was a professional warrior. Cossack communities were largely made up of peasants, who had fled from serfdom, or criminals, escaping their punishment. They settled along the Don and the Dnieper Rivers in the south. Eventually they developed their own military structures and helped fight the Tatars during the Tatar-Mongol yoke and protect Russia’s borders from enemies.

Yermak was a Cossack army commander, which speaks highly of his leadership abilities. According to Russian historian Aleksandr Radishchev, “if one hasn’t inherited the position of power through family, the only way to rule a multitude is to have a greatness of spirit and a fineness of qualities respected by one’s subordinates. Apparently, Yermak had both of those characteristics to be a leader in the military, especially since his troops were made up of Cossacks, known for their love of freedom.”

History is often delicate in depicting the reputations of its heroes, and Yermak was no saint – despite the fact that at one point the Russian Orthodox Church considered canonizing him. Scholars agree that most likely he and his comrades-in-arms took part in the traditional occupations of Cossack outlaws - gang robberies and piracy. Combined with their war experience, Yermak’s band of warriors were virtually unstoppable – able to endure long upstream trips, survive the harshness of the elements and stave off wild beasts and blood-sucking insects.

The Conquest of Siberia

During this period a famous merchant clan, the Stroganovs, settled on the eastern fringes of Russia, along the rivers Chusovaya and Kama in the Ural Mountains. They had established profitable enterprises for salt production, agriculture, trade and other activities. They also obtained permission from Tsar Ivan IV the Terrible to expand their lands further. Granting such permission to the Stroganovs cost the monarch nothing, because the lands didn’t belong to him. They were the territories of the Siberian khanate ruled by Khan Kuchum, who had united the Siberian tribes and converted them to Islam. The Stroganovs longed to posses this new territory, but with such opposition, they were unable to do so. Thus, Kuchum, gathering more power, began harassing the outlying settlements. The Stroganovs had nowhere to turn for protection, but to the Cossacks.

While it remains unknown who took the initiative – Yermak himself, when his transgressions forced him to flee the Volga region, or the Stroganovs, finally resolving to take serious action against their neighbor in the east. Regardless, there was no better man for the job than Yermak. Most of his troops were criminals wanted by the Tsar’s authorities for robbery, looting and violence. They were desperate and willing to risk their lives for great return.

Yermak set out on his campaign beyond the Urals between 1579 and 1582, according to different sources. Even though there were nearly ten thousand Tatars fighting against him, he was able to conquer them with just fifteen hundred men. Yermak’s band was well-armed and fought with superior tactics and weaponry, while the Tatars were still using bow and arrows. The Siberian tribes, which had been conquered by Kuchum, though brave, lacked discipline - they were disjointed and could not withstand a military force.

Historians believe Yermak’s victory was solely due to the firearms he possessed, which were apparently unknown to the Tatars and had a terrifying impact at a distance. However, it would be unfair to credit the miraculous conquest strictly to rifles. There were several factors that affected the outcome of Yermak’s venture. First of all, Yermak was a very experienced commander, and knew how to efficiently organize his troops. The second important factor was the timing – right before Yermak’s campaign, Kuchum’s defenses had been split and half were sent to fight in Perm, the land which he was trying to subdue. Lastly, Kuchum didn’t have enough support – the Siberian tribes, which were paying tribute to him, were forced to join his army, yet hesitant to fight the Cossacks. 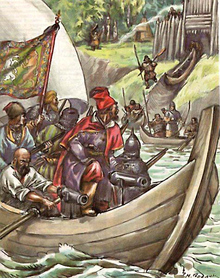 Yermak captured the capital of the Siberian Khanate Isker, also known as Kashlyk, in the name of the Russian Tsar and forced the population to pay tribute to the Russian State.

There were tremendous riches in Siberia - gold, silver, precious stones and expensive furs like sable, marten and fox. According to the chronicles, after the Battle of Isker, the capital of the kingdom, Khan Kuchum fled with just a small part of his treasure; the rest was taken by Yermak and his men. The Siberian Khanate had traded fur in exchange for precious metals - local khans were the only suppliers of fur to all the members of the Golden Horde spread across the steppes of Central Asia.

Yermak sent a messenger to Ivan the Terrible with gifts and the news of his great conquest and asked the Tsar for military aid. The Siberian lands were so vast they exceeded Russia’s territory by several times. Ivan the Terrible understood the tremendous value of the conquest and, as a reward, granted amnesty to Yermak’s entire band. As a token of his special favor for Yermak, Tsar Ivan sent him a chain mail. He also agreed to send troops to reinforce the newly conquered territories. However, the death of the Tsar and the following upheaval in the country delayed the troops.

The rainy August night of 1584 put an end to Yermak’s glory. Exhausted after the trip upstream he and his Cossacks set up camp at the delta of the Vagai River for the night. Kuchum and his men suddenly attacked the sleeping warriors. 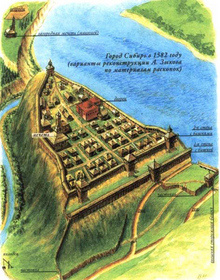 The only way for Yermak’s troops to survive was to retreat to the river, where they had left their boats, and sail off into the darkness. They fought bravely and 90 out of the 108 Cossacks were able to escape. Yermak was probably among the last to retreat. He did get as far as the river – where his body was discovered later. The exact circumstances of his death are still unknown – he could have been killed there or drowned by the weight of his chain mail – the precious gift from the Tsar.

Having lost their leader and with no military aid, the Cossacks decided to leave Siberia. They didn’t know the Tsar’s troops were already close by. The Tatars reoccupied Isker, and upon arrival, the Tsar’s army set up a fortified town near Siberia for the winter. In 1586 new troops arrived and finally destroyed the Tatars, reclaiming Siberia.

Before Yermak, Siberia had not been a mystery land for Russians. They had been trading with Siberian tribes since 11th century. However, Yermak’s conquest sparked a massive resettlement. The vast land that seemed to have no end needed to be explored. Russia discovered the untapped riches of natural recourses hidden in the Siberian soil – coal, iron, precious metals and stones - later they became the main supply for the entire country.

The fact that the first settlements in Siberia were made up of free Cossacks had a big impact on the future of this territory – it never adopted serfdom. Peasants, fur hunters and servicemen flooded the land in search of a new life. A century later more great events followed, which led to the discovery of the channel separating Asia from North America, and the settlement of the Pacific coast as well as expansion of the Arctic navigation.