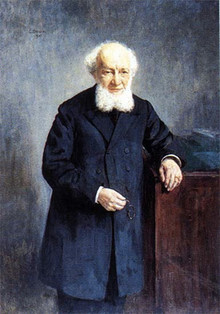 Semyonov-Tyan-Shansky was an outstanding geographer and academician whose groundbreaking research earned him the right to use the name of one of the largest mountain chains of the world – Tyan Shan – for his last name. He managed the Russian Geographic Society for 40 years. For his outstanding research in botany, zoology, and geography Semyonov-Tyan-Shansky was elected to the position of full member at all the Russian Universities.

Pyotr Semyonov was born on in 1827 in the village of Ryazanka in the Lipetsk region (now Central Russia) into the family of a retired captain. His father was a veteran of Russia’s war with Napoleon at the beginning of the 19th century. When the boy was growing up he was always thrilled when his parents took him to the woods to see new places.

“Every time they showed me a location I had never been before, it seemed to me that I discovered something new”, Pyotr recalled. “Each place I saw was simply gorgeous”. Step by step, geography became his favorite discipline. From his early years he decided he wanted to become a geographer, exploring lands nobody had ever seen before.

In 1844 Pyotr Semyonov entered the St. Petersburg University to study natural science. At that time he became a member of the so-called “Petrashevsky Circle”, a literary discussion group of progressive-minded intellectuals in the capital. There he met Fyodor Dostoevsky who would later become one of Russia’s most prominent writers. However, his passion for exploring new lands won in the end. Upon graduation in 1849, Pyotr Semyonov became a member of the Russian Geographic Society, established 4 years earlier. Later on he would become its secretary. 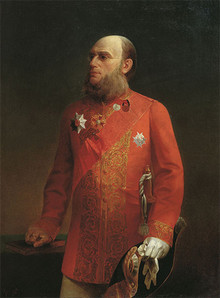 The same year he embarked on his first expedition, exploring the country along the banks of the Oka and the Don rivers in the European part of Russia. Afterwards, he published a research paper on the distribution of plants in the river basins. His work brought him a master’s degree in Botany.

In the 1850’s he went to Berlin to resume his studies of geology and geography, doing so under the guidance of the prominent scholars at that time Alexander Humboldt and Karl Ritter. He was especially thrilled to hear Humboldt’s stories about Central Asia, and  Pyotr wanted to find out as much as could about this vast area.

Central Asia on his mind

In 1853 Pyotr Semyonov travelled to the Italian Alps to prepare for his future Central Asian voyage. For 2 years he hiked around the area without local assistants – he paid special attention to the geology and plants of the area. He also made more than a dozen climbs to the peaks of the Alps.

At that time, Central Asia was still considered a “no man’s land” by many Europeans. The only documents about the area were some memoirs left by Russian officer Filip Yefremov who had crossed the area after being held prisoner by one of the tribes, and an article about Mongolia by Russian scientist Iakinf Bichurin. Alexander von Humboldt and Carl Ritter based their studies of Central Asia on research papers by ancient Chinese scholars. However, both of these German professors used to say that their studies of the area were not complete and were based on assumptions rather than facts. So, collecting facts and field research was a challenge Pyotr Semyonov had to face. 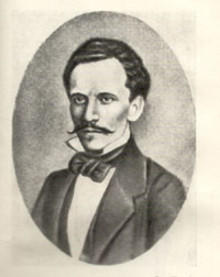 The first thing that the young Russian did was overhaul all the studies of the area. Thanks to his careful work, he managed to prove the volcanic nature of some mountains in Manchuria in Northeastern China. This was a huge discovery at the time, as many scientists believed that volcanoes could only exist in coastal areas. He also prepared a Russian translation of Ritter’s book “Explorations of the Asian lands” where he examined many myths about this area. In 1856 he translated another of Carl Ritter’s books, “The manual of Asian Lands”.  He also supplemented Ritter’s work with his own research on the Asian part of Russia. Semyonov’s supplements were as big as the original volume.

At that time, the possibility of a journey to Central Asia seemed to become a reality – he was especially thrilled to explore the mountain range of Tyan Shan and the neighboring lake of Issyk Kul. His trip became even more feasible due to the fact that some of the areas near Tyan Shan soon became a part of Russian Empire. In the middle of the 19th century, Russian troops founded the fortress of Vernoe (the modern city of Almaty), the largest city of Kazakhstan, which became a base for the studies of the young Russian geographer. In 1856, Semyonov received Humboldt’s blessing and went to the East of Russia. His final destination was Tyan Shan, which in Chinese means “The Mountains of Heaven”.

Pyotr Semyonov began his trip in the Siberian city of Barnaul. He crossed the Altay Mountains and came to the lake of Issyk Kul – one of the deepest lakes in Asia, located in the modern-day Kyrgyzstan. This area was covered with small forests full of different animals. Semyonov managed to determine that 80 rivers from Tyan Shan flowed into the lake, while none of them flowed out, disproving the earlier belief that the River Chu issued form Issyk Kul. He also made a complete list of animals and plants in the area. 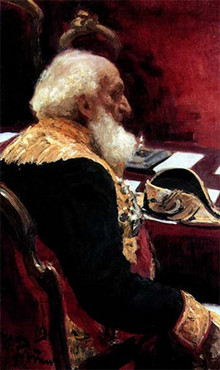 For the winter, Semyonov returned to Vernoe to record and structure the results of his first trip. In 1857 he set off for Tyan Shan again – together with the Siberian teacher of Art Anatoly Kosharov. They reached vast Alpine valleys at a height of almost 400 meters above sea level. According to Semyonov, he was mesmerized by the local “birds of Paradise” and their singing.

During his first climb, he listed of dozens mountain lakes. The second climb led Semynov even higher – to a huge flat area where he could see the gorgeous panorama of the Tengri Tag mountain chain and its most beautiful peak – Khan Tengri.  He was the first European that managed to come close to these mountains. “I was almost blinded by this magnificent sight,” Semyonov recalled, “the chain consisted of more than 30 mountains covered by a huge blanket of eternal snow. And only Khan Tengri seemed to me twice as high as others”.  There he made one small discovery – he saw a kochkar – a mountain ram of the Tyan Shan Mountains which all the scientists of that time considered to be extinct.

One of his most interesting discoveries was the fact that he managed to refute Humboldt's assumptions of Tyan Shan’s volcanic origin. He saw no traces of volcanic activity in the area. His two-year long trip led to the complete and systematic description of Tyan Shan, its layout, vegetation, and wildlife, published in 1859. Research like this was quite an achievement by the standards of that time – no other scientist had done complex studies of the kind. Many were stunned by how fundamental his work turned out to be. In 1910, almost half a century after this remarkable journey, Russian Emperor Nicolas II ordered that Semyonov add the epithet “Tyan-Shansky” (that is, “of Tyan Shan”) to his last name as a sign of honor. 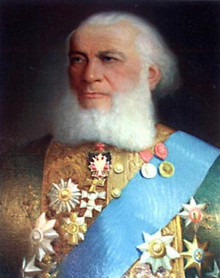 Upon his return to the Russia, Pyotr Semyonov resumed his work at the Russian Geographic Society. From 1860 till 1873 he was chairman of the department of physical geography. In 1874 he became the society’s chairman. He was a great supporter of many innovative projects emerging at the time. In the 1870’s he did the best he could to assist the endeavors of 24-year-old scientist Nikolay Miklukho-Maklay, whose mission was to carry out geographical and anthropological studies on the remote island of New Guinea. Semyonov managed to convince the society members to give the young man a green light for his project. He made the right decision: on completing the expedition, Miklukho-Maklay earned the merit of being a prominent figure in Russian geography for his major discoveries.

Another successful project that he supported was the expedition of another prominent explorer, Nikolay Przhevalsky, to study the areas of the Far East and Central Asia. He was elated to hear about the journey’s success, realizing that his endeavors in the area had attracted lots of followers. He spent endless hours training promising young geographers.

For 22 years from 1863 till 1885 Pyotr Semyonov coordinated the creation of the Russian Geographic Dictionary. These five volumes contain complete information about the country’s rivers, lakes, seas, mountain chains, regions, and cities. Some of the articles were written by Semyonov himself. No other European country could boast such a complete encyclopedia. Researchers still call this collection Semyonov’s dictionary. 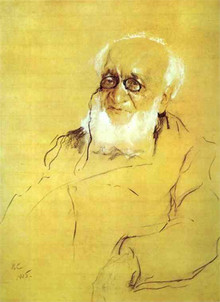 But it was not all about geography for Semyonov. He managed to excel in other areas. Pyotr Petrovich did his best to promote statistics in Russia. He chaired the Central Committee for Statistics for 10 years from 1864 until 1874. When it was transformed into the Statistical Committee of the Ministry of Interior, Semyonov continued to supervise its activities. Thanks to his efforts, the first Russian population census was held in 1897. In that year he also became a member of Russia’s State Council.

Semyonov-Tyan-Shansky was also known as a connoisseur of art. Being a man of considerable fortune, he managed to amass a collection of Dutch master paintings. This collection is now on display in the Hermitage Museum in St. Petersburg. His other passion was insects. Semyonov managed to collect 700 thousand specimens under one roof. He went to Central Asia in 1888 for a couple of months to enhance his collection.

Pyotr Semyonov-Tyan-Shansky died in 1914 at the age of 87 of pneumonia. His two sons Andrey and Veniamin also became prominent geographers. Andrey excelled in entomology, while Veniamin became a specialist in population studies and city planning. His work was greatly criticized by Stalin: the Soviet Leader was pushing his industrialization plans hard, and did not care much about the conditions in which people lived. Eventually, Veniamin Semyonov-Tyan-Shansky’s research lab was shut down, but he nevertheless miraculously escaped Stalin’s purge in the mid 1930’s.

Even now the Russian Geographic Society gives the Semyonov-Tyan-Shansky medal to those who have completed prominent scientific achievements. The first recipients of the medal were those who discovered the highest mountain in the Tyan Shan mountain chain in 1943. It was later called Pik Pobedy (Victory Peak in Russian).

Semyon Dezhnyov Semyon Deznyov was the Russian explorer who discovered the Bering Strait.