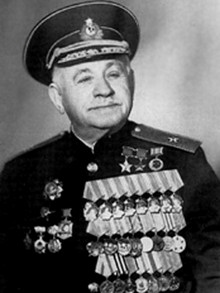 Ivan Papanin was a leading Arctic explorer and was the first to establish the transport connection between Murmansk and Vladivostok called “The Northern Sea Route”. He is best known for his 274 day drift on a 30 by 30 meter ice block all the way from the North Pole to the edge of the Arctic with his team of scientists. He used every opportunity to share his knowledge and experience with others, and during the last years of his life he was a frequent guest in schools and universities.

Early years, through the Revolution

Ivan Papanin was born in 1894 in the port of Sevastopol on the edge of the Crimean Peninsula (in modern Ukraine). His father was a sailor, but did not have a permanent job. The family could barely make ends meet – they did not have a house of their own, and lived in a strange structure made of three walls and a chimney. Ivan was the oldest child in the family, and had to study and work at a plant producing navigational devices. Ivan was also a diligent student, and the headmaster at Ivan’s school was very pleased with the academic progress young Ivan was making. As a result, young Ivan was granted a state scholarship to finish secondary school. In 1906, at the age of 12, the management of the factory sent him for a year to the city of Revel (now Tallinn, the capital of modern Estonia) to work and study at a ship-building plant.

Throughout his childhood, Papanin was thrilled with the revolutionary ideas. He admired the workers and sailors who stood up against the Tsar in 1905 in an attempt to overthrow him. He promised himself that one day he would join the revolutionary fight for a better future.

In 1915 he was conscripted into the Russian Navy as a technician. His ship was tasked with patrolling the Baltic Sea and following the positions of German ships. As soon as he found out about the Bolshevik Revolution in October, 1917, he immediately took their side and went about promoting socialist ideas among the sailors. 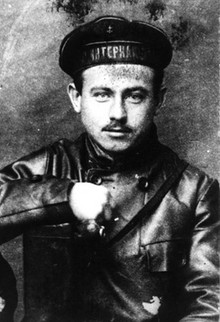 In the spring of 1918, Ivan Papanin left Revel and returned to his native Sevastopol. At that time the city was occupied by the White Guard – the troops loyal to the Tsar. For several months, Ivan Papanin was one of the leaders of the Bolshevik resistance movement on the Crimean Peninsula.

In 1920 Papanin led several military operations in the Crimean Bolshevik underground movement. Even when the “White Guard” surrounded all the partisans in the mountains, Papanin escaped to Russia through Turkey. He helped to coordinate the offensive movements of the Red Army against the remaining troops that were still loyal to the Russian Emperor.

After that, Papanin was appointed chief of the Regional Branch of the Cheka – the newly-born Soviet secret service.  He never said anything in public about the Cheka. But his relatives said that the injustices he witnessed there made him interrupt his career as an officer. After a few unsuccessful attempts to change his position and location, Ivan Papanin ended up in Moscow: in 1923 he began his work at the People’s Commissariat of Communications. Two years later he was sent to the Far East region of Yakutia to handle the construction of the radio station that would expand communication routes in the country and provide radio connections to those who were working in the diamond mines.

Falling in love with the North

Working conditions for Papanin and his wife Galina were quite harsh – Yakutia is considered the coldest area in the Northern Hemisphere, where temperatures often fall below -50 degrees Fahrenheit. Another problem was food delivery. Nevertheless, Papanin proved he could be a good manager under such circumstances. He did not feel sorry for or regret these difficult times. “In Yakutia I really fell in love with the North”, he recalled later. 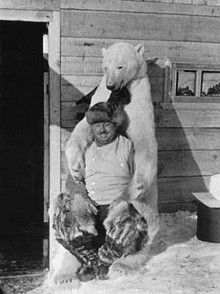 In 1928 Papanin returned to Moscow to coordinate numerous innovative projects in remote areas of the country. In 1931 he set off to the North again. Onboard The Malygin ice-breaker, he reached the Arctic archipelago of Franz Joseph Land. There, in the bay of Tikhaya, he supervised the construction of an observatory – the Soviet Union’s contribution to the international initiative to study Arctic lands, called “The International Arctic year”.

Two years later he was sent even further, to the Cape of Chelyuskin, the northernmost point of Eurasia, to supervise the construction of a Polar station. Over the winter he managed to build a big township – a surprise to many sailors passing through the cape. And again, his wife Galina was by his side.

At that time, the leadership of the USSR was trying hard to develop a route from Murmansk in the North to Vladivostok in the East. For this reason, the Soviet government set up an organization called Glavsevmorput, or the Northern Sea Route in Russian. This administrative body oversaw vast territories of the Arctic North. However, it was extremely difficult to establish constant navigation along the route. The biggest disaster the administration faced on the route occurred in 1934 when the Chelyuskin ice-breaker was crushed by ice blocks and sank, killing one aboard, while hundreds of others were saved from the cold temperatures by air rescue. The situation was nowhere improving in 1937, as 25 out of 69 vessels travelling the route became trapped in the ice. Joseph Stalin was furious: some of the Glavsevmorput executives were jailed and the organization was disbanded. Stalin was aware, however, that this was not the ultimate solution to the problem.

Living on an ice block 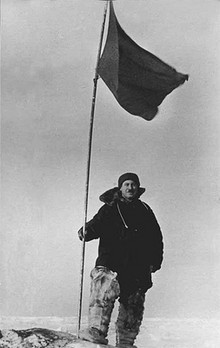 The Soviet government needed to conduct a study of ice movements in the northern waters to determine plausible navigation options in the area. For this reason, four researchers were dispatched to set up a mobile laboratory to drift on an Arctic ice block from the North Pole. They were housed in a special tent specifically designed for living and conducting scientific research. The crew had special food rations – all the products did not lose their nutritional value even at temperatures below - 40 degrees Fahrenheit.

On May 21, 1937, an airplane piloted by Mikhail Vodopyanov – a hero of the “Chelyuskin” campaign – took them to the North Pole. The iceberg crew consisted of Ivan Papanin, Ernst Krenkel, Evgeny Fyodorov and Pyotr Shirshov. After quite a dangerous flight, battling a constant fuel leak, they managed to get to the top of the planet and made the drifting ice of the Arctic their home for the next 9 months.

The crew of Ivan Papanin – officially called the North Pole-1 Station – carried out extensive research in the Arctic area. The expedition managed to discover an underwater mountain range which traversed the Arctic Ocean. Ernst Krenkel sent weather reports straight to Moscow every day. Members of the “brave four” were very surprised to see dozens of polar bears, seals and other animals during the course of their drift – they did not expect to see such abundant wildlife in the area and diverse plankton in the water.

The original plan for the North Pole-1 members was to drift for a year. But by February, 1938, the ice block the expedition was settled on began to break down, as they were drifting further into the sea of Greenland.  The researchers had to be withdrawn from the ice as soon as possible.

In the meantime, the four had to fight though a sequence of disasters. The first schooner to come to their rescue was ice-trapped. A blimp sent shortly after takeoff could not reach them. Two submarines dispatched to collect Papanin’s crew could not resurface in the given area.

On February 19, 1938, two powerful ice-breakers “Taimyr” and “Murman” managed to come closer to the North Pole-1 crew. They were evacuated in a small plane which brought them on board the ship. However, the research data obtained during the course of the expedition, unique for that time, was only finalized and documented by 1944 because of WWII.

While the crew was on their way home they received an unexpected order to stay in the city of Tallinn (now the capital of Estonia) for a couple of days. But afterwards, they were given a warm welcome by the Soviet leaders – thousands flocked to the streets of Moscow to greet the heroes. All members of the expedition received the title of “Hero of the Soviet Union” – few people received such honors before WWII.

Utmost devotion to the ocean

During World War II, Papanin became a representative of the State Defense Committee. He was responsible for all transportation along the Northern Sea Route. Ivan Papanin had to pay special attention to the implementation of the lend-lease program – he had to make sure that all the US cargo ships would get to the Russian port of Murmansk safe. 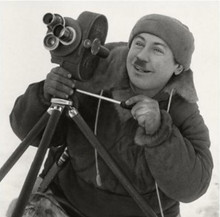 From 1948 forward, Papanin totally devoted himself to educational activities. From 1948-1951 he served as deputy director of the Oceanology Research Institute – a branch of the Soviet Academy of Sciences. For 37 years from 1951 until his death in 1986 Papanin was the Head of the Department of Sea Expeditions of the Academy. He contributed to nearly all Soviet scientific explorations worldwide. Ivan Papanin is the author of several fundamental research papers on ocean studies. He was especially enthusiastic in his support of Arctic-related projects – like the voyage of the Arktika atomic ice-breaker in 1977, and the ski expedition of Dmitry Shparo to the North Pole in 1978. He was awarded eight Orders of Lenin, two Orders of the Red Banner, one order of the Red Banner of Labor, one order of the October Revolution, as well as the Orders of the Red Star and the Nakhimov order for his contributions during WWII. In 1997 Papanin published his autobiography, entitled “Life on an ice block”.

After Papanin’s death, his name was given to a cape on the Taimyr Peninsula – not far from the place where he built the Cape Chelyuskin settlement. Papanin is also a mountain in Antarctica and an underwater peak in the Pacific Ocean. Naval researchers also paid tribute to the courageous explorer – a state-of-the-art research ice-breaker also bears his name.