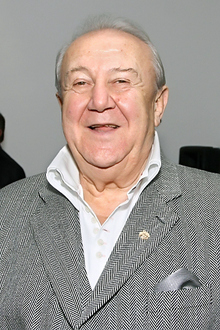 A running joke in Russia says that the Ostankino TV tower in Moscow – which stands at 561 metres and once held the world record for the tallest free-standing structure in the world – is in fact Zurab Tsereteli's monument, entitled A little candle for Russian television. His work has caused appreciation and controversy alike.

Yet, the unstoppable artist continues decorating Russia, and the world, with his colossal works. In his own words: art has always been the defining part of my day-to-day life, and I practise it every day, without fail, in many of its various guises.

Georgia in his blood

Tsereteli was born in Tbilisi to a family of a Georgian engineer and his wife, who, as tradition dictated, dedicated her life to her children. Zurab's uncle – the famous painter Georgy Nizharadze – regularly brought his artist friends to the house.

It was them who became Tsereteli's first teachers. Even in his first works, produced at school, an air of patriotism and affection for traditional Georgian culture can be seen. His path seemed to be predefined – after graduating from school, Tsereteli entered the Tbilisi Arts Academy.

His work during these early years was greatly inspired by the summers spent at his grandmother's village. Tsereteli recalls being impressed by the multitude of colours within the white hills of the Caucasus as well as the touchingly simple way of life of the local residents.

The development of a sculptor 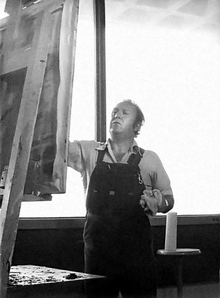 The artist's diploma work, entitled A Song for Tbilisi, originally received favourable critical acclaim. Yet party officials considered it to be too laconic, and Tsereteli was “advised” to change the piece. The young painter had to present a new canvas – The portrait of a sportsman – as his final work.

After graduating in 1958, Tsereteli got involved with several architectural and archeological projects around Georgia. Some artists of the time condemned the state's policy of forcing artists to participate in state projects; they said it tampered with their creativity.

However, Tsereteli recalls being grateful for the time spent constructing large architectural monuments, sketching ancient ruins and acquainting himself with Georgia’s multi-faceted nature. He said it gave him inspiration for his future work.

However, he keenly participated in Soviet exhibitions of modern art. He first gained recognition in the 60s, when the cultural climate in the USSR shifted towards a freer form of expression. During this time, mosaics and murals become the artist's preferred mediums of expression.

Tsereteli was commissioned to complete several works which would become defining in his career. The studies he drew for the children's cinema in Tbilisi earned Tsereteli a favourable reputation. He combined monumentalist visions with childhood fairytales and dreams, as well as powerful political symbolism.

Soon, he was working as head of many projects all over the Soviet Union, creating a multitude of stained-glass windows, mosaics and murals.

Apart from heading several teams of artists to create impressive mosaics, he also developed a brand new technique in mural building. It combined bronze work with a distinctive sculpting style which barely rises from the wall surface, giving the representation characteristic warm shadows.

The progress of his artistic vision can be traced from decorating summer camps in southern USSR provinces with colourful mosaics, to participating in a massive architectural undertaking such as the building of a hotel complex which would become the residence for international athletes during the 1980 Moscow Olympics. This was the artist's ticket into monumental sculpture. 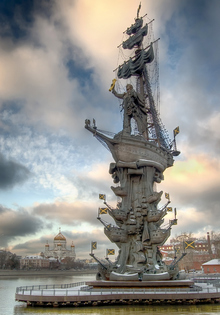 Some joke that the statue of Peter the Great – which now towers 96 meters over the Moscow river – was in fact intended as a present for the U.S. and was entitled Columbus.

However, rumour has it the U.S. government were shocked by the disproportionate and gargantuan nature of the work and rejected it. Tsereteli had no choice but to offer it to Russia instead.

Some say that this theory explains why Peter, who never liked Moscow and, as a result, built St. Petersburg, became immortalised in the Russian capital, since the artist has long befriended its ex mayor, Yury Luzhkov.

The monument sees yet another development in Tserteli's style and technique. The skeleton of the statue is made out of stainless steel, which has been filled with blocks of reinforced concrete. The outer layer details are made out of bronze, cast according to the proportions of Tsereteli's sketches.

The structure was then coated with wax in order to lessen the harmful effect that the atmosphere could have on the bronze. Some say that during the statue's construction, the telescope that Columbus was supposed to hold was replaced with a scroll in order to fit the occasion – Peter the Great founding the Russian navy.

Moscow residents have an ambiguous relationship with the monument – some consider it to be to pompous, out of place and disproportionate. Some also suggest that he has created a monopoly on monuments in Moscow, making it virtually impossible for young artists to get a name in it. 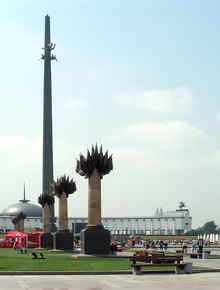 Other works in Moscow


Tsereteli allegedly secured other important commissions with the help of Luzhkov. These included the reconstruction of the Cathedral of Christ the Saviour, the building of the Manege Square Ensemble and the design of a War Memorial Complex at Poklonnaya Gora. The latter is a sculptural ensemble, depicting the victims of Nazis, situated at the centre of the memorial complex.

The whole world for a display ground

He is also known as the creator of numerous monuments around the globe. The sculpture called To Destroy the Wall of Distrust, situated in central London, is four metres high. The monument Good Defeats Evil, in front of the UN building, is 16 meters high.

Tsereteli also created a 10-storey high sculpture, Tear of Grief, to commemorate the victims of the September 11 attacks.

However, the Tear of Grief was not placed on Ground Zero, but was carefully tucked away (as much as it is possible with a sculpture of that size) in a remote location: The Peninsula at Bayonne Harbor in New York. His work can also be found in Paris, Tokyo and Seville, to name just a few. 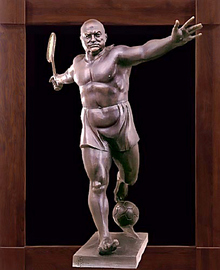 
One of the most-cited references to Tsereteli comes from a short story by the Russian writer Boris Akunin. It depicts the monumentalist as an alien, who attempts to install a beacon on Earth, comprised out of his numerous enormous works.

The story gained massive popularity in Russia, reflecting the public's attitude towards Tsereteli's work. His name has become a common epithet. Muscovites can sometimes be overheard saying “That’s just plain Tsereteli”, meaning something is as useless as it is tasteless.

However, despite his compatriots' continually-apprehensive reception, he is the holder of many government orders and public positions, the most prestigious of which is his presidency of the Russian Academy of Arts.

He insists that it is too early to retire, believing he feels more creative potential every year. More than anything, Tsereteli values his artistic independence and the ability to fulfill his visions.

He has always been aiming to contribute to the development of Russian art. As a means to this end, he initiated the creation of the Moscow Museum of Modern Art in 1999. It quickly became one of the capital’s main cultural venues. His current project is to install a 100 meter monument of Jesus Christ on the Solovki archipelago in the White Sea.

Zurab Tsereteli now lives in Moscow with his wife – Princess Andronikashvili – who comes from a noble Georgian family, and claims partial decent from the Byzantine emperor Andronikos I Komnenos. They have a daughter and three grandchildren.