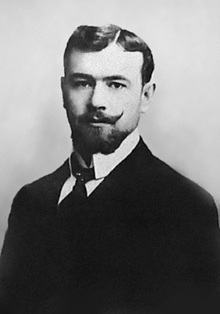 Aleksansdr Khanzhonkov was a pioneer of Russian cinema. The description of his official and unofficial titles is abundant in “firsts” – such as the first cinema entrepreneur and one of the first directors and scriptwriters. Khanzhonkov produced the first Russian feature film and founded the first film studio in the country.

Despite his contribution to the development of Russian cinema he was sometimes accused of being tasteless, biased and even a chauvinist when it came to his historical films.

Still, without Khanzhonkov, the progression of the new art form in Russia would have been much slower.

Born into a Cossack family in 1877 in the village of Khanzhonkovka in the south of the Russian Empire, Aleksandr Khanzhonkov was supposed to follow a military career. He received a prestigious military education and then served for several years, but was discharged due to poor health in 1905. It was then that he first saw the famous Lumière Brothers’ film “Train Arrival.” Walking out of the cinema, he knew exactly what he was going to spend his 5,000 roubles in retirement money on.

Initially a partner of the Moscow film company Gomon and Siversen, he later founded his own film factory and a trading house for the distribution of Russian and foreign movies. In 1905 he began producing documentaries, which he showed along with imported French films. In 1907 Khanzhonkov attempted to shoot a feature film entitled “Palochkin and Galochkin” which remained uncompleted.

But just a year later he did manage to release his first feature film “Drama in the Gypsies’ Camping Ground near Moscow.” At the same time he worked on several documentaries and other motion pictures, which came out on screens the following year. These included, among others, “The Song of the Merchant Kalashnikov,” “The Russian Marriage of the 16th Century” and “Vanka the Key-Keeper.” All of them were screen adaptations of classical Russian literature, tales or folk songs.

The first steps of Russian cinema were not always easy, with filmmakers learning as they worked. Professional actors often despised cinema, regarding it as light-minded and not worthy of their attention. So initially it was amateurs who took part in the productions – which, of course, brought some problems. Thus, Khanzhonkov took much effort to explain to the cast that they were supposed to move and talk naturally, without precipitation.

The Khanzhonkov studio boasted several landmark achievements. In 1911 it released Russia’s first full-length historic movie “Defense of Sevastopol” about the siege of the city during the Crimean War of 1853-1855 between the Russian Empire on one side and an alliance of the British Empire, France, the Ottoman Empire and the Kingdom of Sardinia on the other. Created jointly by Khanzhonkov and his companion, scriptwriter and director Vasily Goncharov, the movie was extremely complicated technically and perhaps would not have been possible to make without the support of Tsar Nicholas II. 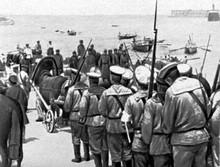 Khanzhonkov did his best to make a real film epic. He found many surviving veterans of the war and used exterior shooting for battle scenes. The tsar even allowed him to engage several regiments of the Imperial Army and Navy for filming. In “Defense of Sevastopol” Khanzhonkov became the first director in the world to use two cameras. The 100-minute movie was a success with the public and also brought him official rewards and high commissions for several documentaries featuring important events in Russian history.

A year later the studio produced the first animation film in the world, “Beautiful Lucanidae, or the War of Sawyers with Stag Beetles,” created by self-taught director and photographer Vladislav Starevich. From a newspaper publication Khanzhonkov learned that a certain young clerk in Vilno (Lithuania, then part of the Russian Empire) had been taking prizes for Christmas fancy dresses made of wrappings and hay. Not knowing exactly what it would bring, Khanzhonkov immediately invited Starevich to Moscow. The result was above all expectations – many of the viewers were convinced that the insects on the screen were real trained beetles.

Khanzhonkov was the only film producer who created a special studio for shooting science films, documentaries about agriculture, geography, biology and medicine, attracting leading Russian specialists in these fields. Some of these movies combined both documentary and feature film traits. Thus, in “Alcoholism and its Consequences,” along with scenes featuring development abnormalities in children of alcoholics, there were staged episodes. Actor Ivan Mozzhukhin played a drunkard watching in delirium as a devil came out of a bottle – one of the first special effects used in the cinema at that time.

The filmmaker prospered. While from 1909 to 1912 he released eight to ten movies annually, in 1913 alone he produced twenty. And the same year – in just four months – Khanzhonkov built a new cinema in Moscow’s Triumfalnaya Square, which immediately became the most visited and prestigious in the city.

The 1917 revolution hampered Khanzhonkov’s business. Escaping from the Red Army, he fled to the resort city of Yalta in Crimea. There he organized large-scale motion picture productions in a new studio built a year earlier. Producing about 15 films over three years, in 1920 he was again forced to flee. Leaving Russia for Constantinople, Khanzhonkov later found himself in Milan and subsequently moved to Vienna, where he tried to restore his business.

In 1922 he finally settled in a villa in Austria’s Baden where he relaunched film production but had to stop again for lack of money.

In 1923, Soviet authorities invited him to return to Russia, which he did. Khanzhonkov received a warm welcome – Soviet Culture Commissar Anatoly Lunacharsky even sent him a greeting telegram. But during those troubled times nobody could be sure of their future and of how long they would enjoy the favor of those in power. Having worked for some time for state-owned film-producing studios, in 1926 he was arrested on corruption charges. Regardless of being released six months later due to a lack of evidence, he was still barred from cinema activities and stripped of his political rights.

Afterward he was rehabilitated but never returned to work. His health had deteriorated greatly – his legs were paralyzed and he could only move in a wheelchair. Still, he wrote his memoirs “The First Years of Russian Cinema,” published in 1937.

He spent his last years in Yalta under the Nazi occupation of 1941-1944. In a sign of respect for the world-renowned filmmaker the Germans gave him two rooms in his former house. After Yalta was liberated he was accused of his link to the Nazis and deprived of a bread-ticket. At that time this equaled death. Khanzhonkov had to rummage garbage bins in search of food. The filmmaker did see the end of the Second World War and Victory Day. He died at the age 68. His name was forgotten for years and was only revived after Josef Stalin’s death in 1953, when Nikita Khrushchev came to power.