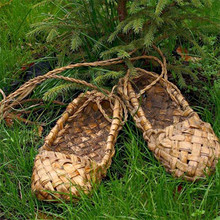 Lapti are the traditional bast shoes of the Russian peasants. The word lapti apparently originated from the word “lapa”, which meant “foot” in old times, and now means paw. Until the beginning of the 20th century lapti were worn in every Russian village, but nowadays one can hardly find anyone wearing them save for the special occasions, like celebrations or costume shows.

The popularity of lapti was easy to explain: they were very cheap, and not many peasants could afford other, better footwear. Even now, poor people are sometimes called “lapotniki” – “persons, who wear lapti” or “persons, who sell lapti”.

Lapti didn't last long, and frayed in a week or two, even faster in spring or fall due to the rainy weather. Taking to the long road, the peasant put several spare pairs of lapti in his bag.

Lapti were made of bast – a part of the tree bark, with the help of a wooden last and wooden or iron hook, a so-called kochedik. Every family owned these simple instruments, and every man in every village could make lapti, while women usually did not have this skill. A woman, who could make bast shoes, was reputable among home-folks. Lapti were made in winter, when peasants had more free time, as they didn't have to work in the fields. 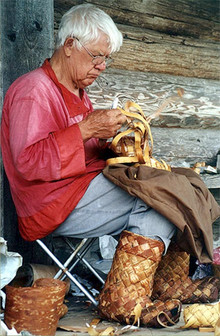 Plaiting lapti was considered a very easy task.  This is why Russians often say about drunk people “lyka ne viazhet” – meaning they are so drunk they are even unable to perform an easy task. “Doing business is not like making lapti”, one Russian proverb says. However, despite lapti-plaiting being such an easy task, legend has it that Peter the Great, who could build ships and perform surgery, once tried to plait lapti and failed to do it. Lapti are usually differentiated by the type of the plaiting or by the sort of bast. The best bast for lapti is the bast from the linden’s bark. For one pair three young lindens had to be stripped. The peasants also must have known a way to strip the bark from the tree without killing it.

In Russian folklore, lapti hold a prominent place. There are songs about them – “Oh, Lapti Moi” (“Oh, My Lapti”), “Skripiat Moi Lapti” (“My Lapti Are Creaking”), many proverbs and idioms. For example, “to ring the lapti” means “wander idly to and fro”. In the Soviet times, lapti also became a symbol of lack of culture. Uneducated, simple-minded countryman could be referred to as “eating soup with his lapti”.

Dream guides say that seeing lapti in a dream presages a long and interesting journey. If one sees oneself making lapti, they will be respected by their friends, but if one is buying lapti – they are likely to get in trouble.


Written by Olga Pigareva for RT