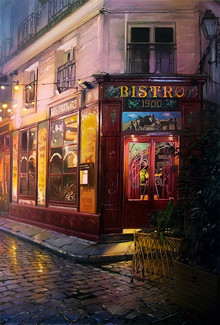 It is well known that a small restaurant or café in France where you can have quick and simple meal is called a bistro. However, there are still debates over the etymology of this word. The most popular version maintains that the term originated during the Russian Occupation of Paris in 1915.

Accordingly, when hungry Russian Cossacks came to cafes, they would impatiently cry “Bistro! Bistro!” (Russian for “hurry!”), demanding the food be served quickly. As their main evidence, supporters of this theory point to a memorial plaque at a restaurant in Montmartre that tells this story.

However, many linguists believe the origins of the word have nothing to do with the Russian language.They claim that words with similar roots existed long before the Russian influence. For instance, according to one theory, the word bistro derived from bistraud, which, in one of the Poitou dialects in France, means “the assistant of the wine seller.”

Others connect bistro to the word bistingo, which means a tavern or motel where gypsies spend the night. Some also link the term to the words bistrouille or bistouille, which refer to an alcoholic drink of poor quality.

But, whatever the version, it’s now been officially recognized by linguists that the Russian etymology of this word is only a beautiful tale. Nevertheless, the word bistro has been adopted into the Russian language with the same meaning as in French – a café or a restaurant where one can have a quick bite.

In the mid 90s, Moscow Mayor Yuri Luzhkov came up with an ambitious plan to create a chain of “Russian bistros” that would provide quick, but good quality Russian food that could eventually replace McDonalds. The idea has not been successful, but you can still find cafés called Bistro in many Russian cities.