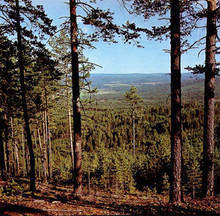 
Taiga is the largest type of forest on the Earth. Its huge territory accounts for one-fifth of the world's total forested land and contains as much as one-half of the world's evergreen forests.

The taiga is one of the world’s largest terrestrial ecosystems. It is a great example of how nature strives through the harshest of weather conditions.The word taiga comes from Turkish and it means “coniferous forests.”

These forests represent the largest, oldest and snowiest type of land territory, covering extremely large areas in northern Russia, mostly Siberia. In some places, the width of these forests reaches several thousand kilometers. The taiga takes up about 11 percent of the Northern Hemisphere.

Similar forests can be found in areas of Eurasia and North America, and mountain regions of Northern Europe. The areas covered by this type of forest are larger in Russia than anywhere else in the world. The taiga is sometimes referred to as a Russian miracle.

The taiga forests have one of the coldest biomes on Earth its temperatures vary considerably in the winter and summer.

The temperature in the summer is usually around 10 degrees Celsius and never higher than 20 degrees. Even though summers are mostly warm, they are very brief - for a large part of the year, the sun does not rise too far above the horizon. Winters last up to six months, with the average temperature far below freezing.

Those who have experienced the taiga, say living there is cold and lonely. The spring and autumn are so brief, you hardly know they exist at all.

Taiga flora and fauna - adapting to the weather

The soil in the taiga is thin and poor in nutrients. This contributes to the fact that most trees in the taiga  grow close to the ground and their roots don’t go too far into the soil. Even though the taiga is mostly coniferous – dominated by larch, spruce, fir, and pine, some broadleaf trees can also been seen here. For example birch, aspen, willow, and rowan. A lot of the trees found in the taiga change their biochemistry throughout the year, so they have the strength to better resist freezing. Taiga is also no stranger to moss and bogs.

Nowhere else in the world is there such a large number of furry animals than in the taiga. Large herbivorous animals and small rodents are residents in these forests – bears, weasels, raccoons, wolves, lynxes, rabbits and squirrels. They are well adapted to the harsh weather.

Often, the larger animals eat a lot during the warmer months, gain a lot of weight, and then sleep through the colder months when they hibernate. The animals that don’t hibernate generally become less active.

Brown bears are among the largest and most widespread across taiga.

One of the most serious threats to the taiga is deforestation for human purposes. And this practice has been on the rise in recent years. A lot of animals of the taiga are hunted and trapped for their rich furs. This plays a major role in the decline of their populations. Global warming is also a reason for concern.