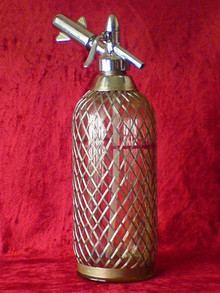 In technical science, a siphon is a long tube inside any reservoir (bottle, jar, etc.) which allows liquid to drain from a higher point than the container itself. Thanks to the difference in pressure inside the tube and reservoir the liquid flows to the top without having to be pumped. This phenomenon was discovered by the ancient Greeks. They, as well as the Egyptians, used the device mainly for peaceful purposes such as extracting water from huge storage jars. Centuries later the Byzantine Navy, with the help of this method, burned oil in jars, which they hurled at enemy ships. History textbooks call it “Greek fire.”

The method of liquid extraction of water is very cost-effective – no additional energy is required to keep the liquid flowing up and out. Over the centuries people used it for various purposes – to pump water from cellars after floods, to extract gasoline from storage reservoirs at fuelling stations and even to flush toilets.

In the U.S.S.R. the siphon was associated with carbonated water bottles and plumbing tools no one in Russia could do without.

Siphon bottle: the choice of the Soviet generation

In the USSR carbonated water was not often found in food stores. Due to outdated technology it could only be produced in small quantities which made it relatively expensive – many Russians could afford to buy it only for holiday dinners as a treat for the children. However, in the streets of Russia as in recreational parks there were huge carbonated water machines where a soda with syrup cost 4-5 times less than if it were bottled. For kids this was part of a weekend treat – along with carousel rides, movies, ice cream and other pleasures of life. So when the first siphon bottles appeared in Russia they immediately made huge splash with the population - especially families. Free-of-charge homemade carbonated water became a new concept in Soviet lifestyle at the end of 1960s.

The standard siphon was a 2-liter bottle about one foot high. On top of it was a lid with a tap, a handle and a hole for a gas balloon – which had to bought separately. All you had to do was fix the balloon on top of the lead, put a glass under the tap, push the handle to let the water flow through and mix with the gas – and your carbonated water was ready. You could mix it up later with syrup if you wanted to.

In the 1970s the siphon was not a necessity and people usually bought it as a gift. The only thing you had to make sure of was that you also got a couple of gas balloons to go with it – otherwise your gift would be useless. However, this siphon fashion soon began to pass largely due to the shoddy Soviet supply system; it was difficult to find balloons in many of the smaller cities. Step by step, the siphon became little more than a furniture item.

There were some attempts to keep the siphon alive. Some producers started to make siphons without balloons. They could be filled with gas only at special siphon-filling stations. This idea worked in the beginning but soon people discovered that carrying the heavy jar with its very special lid could be quite troublesome – thousands were broken during transportation. So it became unprofitable to run such stations and by the mid-80s they became extinct.

You can still buy siphons today as a collection item for at least US $70 on the Internet. There are also items for bartenders. But for many Russians the siphon has become a thing of the past. For people over 40 there is a nostalgic pleasure in reading some of the Internet forums where youngsters explain to their friends how siphons work. Many find it hard to believe that this thing ever existed.

Siphons for bathrooms: where every man used to be the plumber 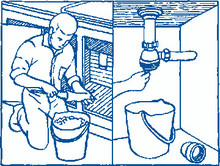 When you come to think of it you realize that you are surrounded with a lot of siphons at home – in your bathroom, kitchen – there’s even a siphon in your washing machine. But the most important one is located under sinks in bathrooms and kitchens.

This siphon is not exactly a siphon – it’s made in the form of a U-shaped pipe to let the water flow from your sink into the sewer system. The problem is that most of these pipes were made from poor quality plastic – and therefore broke very easily. And when that happened the dirty water could flow directly from your sink down to your neighbor’s flat.

For this reason many people taught their sons what to do if such and emergency arose - especially if the sewer system in the house was out of order. In most of cases the siphon needed to be replaced in order to rectify the situation. Thus it became one of the basic skills for many Soviet men living in cities. Still today - in spite of the ready supply of all these sewer system items - people still rely on housekeeping knowledge that has been passed from generation to generation.