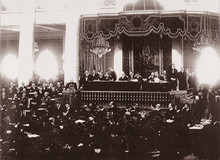 Russia entered the 20th century as the only major European power without a parliament.

The Tsar was responsible for all key decisions, personally chairing the Cabinet of Ministers that could only recommend, but had no formal power to implement new laws. A slightly bigger group, the State Council, which consisted of nobles hand-picked by the monarch himself, worked on the specifics of legislation.

Both the appearance of the parliament, known as the Duma, and its operation until the Revolution of 1917, cannot be considered as natural occurrences, but only within the context of the upheaval that the Russian Empire faced in its last years.

1905 was a disastrous year for the Russian autocracy. The country suffered a series of humiliating defeats in a relatively unimportant, yet hugely expensive and unpopular war against Japan, losing two of its major fleets and becoming the first European great power to be defeated by an Asian country. More importantly, a strike at an armaments plant in St. Petersburg over the illegal firing of four workers turned into a citywide protest that culminated in hundreds of thousands marching towards the Tsar’s residence at Winter Palace with a petition demanding better working conditions. What was intended to be a peaceful protest turned into a massacre, as the guards of Tsar Nicholas II met the protesters with fire. The number of victims varies significantly from source to source, from a couple hundred to almost five thousand, but the most likely number of those killed in the January 5th massacre was a little over 1 000 people dead and 5 000 injured.

Christened Bloody Sunday, the slaughter served as the flashpoint for the start of a full-scale revolt across the country. Peasants seized land, workers downed their tools, and soldiers mutinied. Over the course of 1905 more than half of all industrial workers in Russia went on strike. By October, the railways stopped operating and the huge landmass became paralyzed.

Although the Crown managed to quell the protests with brute force, eventually it had no choice but to offer a compromise.

The October Manifesto, written by Sergey Witte, the Chief Minister, promised freedom of speech, assembly and religion, but most importantly the election of a new parliament – the Duma (from the Russian verb dumat’ - to think). 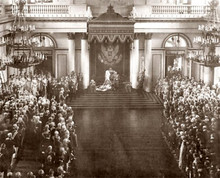 Until 1905 any assembly of political character were prohibited. With the new legislation, some of the underground parties that existed illegally, such as the Marxist Bolsheviks, were able to emerge from the political netherworld of secretive meetings and battles with undercover police agents. Others, such as the liberal-left Kadets were created within weeks of the Manifesto (the Octobrist party even took their name from it). A few, such as the radical populist Socialist-Revolutionary Party, boycotted the election, claiming that the new Duma simply co-opted the opposition.

Suffrage for the election was universal for men aged 25 and over (except soldiers, former revolutionaries and students). But not all votes were weighed equally. All of Russian classes – the peasants, the urban population, industrial workers and landowners were to elect their own representatives, in different proportion to the actual number of voters. In some places the vote of one landowner was worth that of fifty peasants.

Despite the limited franchise, elections in March 1906 produced a Duma that was led by the center-left Kadets and workers’ parties espousing openly socialist principles.

Not entirely coincidentally, just as the first Duma was about to convene, the Tsar published the Fundamental Law.  Contrary to the spirit of the October Manifesto, the law reasserted that the Tsar had absolute power, and could veto any laws passed by the Duma.

And veto them he did. Nicholas II said that signing the October Manifesto made him “sick with shame… at the betrayal of the dynasty”, as he had no intention of becoming a constitutional monarch. On the first day of the Duma’s existence the monarch turned up in lavish ceremonial garb, in contrast to many of the deputies who were themselves former peasants.

Aware that they had no chance of passing any meaningful reform, the Duma became increasingly strident in its anti-Tsarist rhetoric, with some former supporters of the constitutional monarchy calling for a republic. The parliament voted for and passed laws that had no chance of being accepted by the Tsar and his government.

After 42 days in which the sides grew only further apart, Nicholas II had enough and dismissed the Duma.

In protest, the Kadets and their left-wing allies retreated to the Northern town of Vyborg where they signed a radical anti-monarchical manifesto. The Vyborg Appeal called for Russians to stop paying taxes, to refuse to join the army and display other forms of passive resistance.

The Vyborg Appeal did not cause the Russian people to rise up in protest. But it did allow the new Prime Minister, Pyotr Stolypin to arrest the leaders of the Kadets and to ban them from taking part in the election for the Second Duma.

The Second State Duma. Meeting of the press representatives on the distribution of seats in the Duma in the Mariinsky Palace. February 14, 1907

With the Kadets weakened, the Tsar and Stolypin hoped that a new election would provide them with a more malleable parliamentary assembly.

Instead, the votes went to even more radical parties, such as the socialist Mensheviks and the Socialist-Revolutionary Party which opportunistically ended their boycott of parliamentary politics.

While Stolypin wanted the Duma to become a functional government body, the increasingly fractured chamber could not find consensus within itself or with the Tsar. Stolypin’s offers of improved civil and worker’s rights, and local government reform were met with counter-demands and protestations against Stolypin’s heavy-handed law and order tactics.

The Second Duma lasted less than four months before it was also dissolved by the Tsar in June 1907. 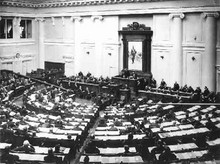 Aware that he was unlikely to get the Duma he wanted, Prime Minister Stolypin went for the easier option. He radically changed the franchise. Now, the vote was put in the hands of the landowners and property owners.

The result was called The Duma of Lords and Lackeys – a puppet parliament that never caused any problems for the Prime Minister and the Tsar, and served its full five year term.

Its successor was elected in 1912. The fourth Duma was very often in the opposition to the Tsar, both before WWI and during its course. On February 25, 1917, Nicholas II signed a decree, dissolving the Duma, but it didn’t obey. A center of the opposition, the Duma played one of the key roles in the Bourgeois Revolution of 1917; its member s were the ones to later form the Provisional Government. The Duma was dismissed by the Provisional Government on October 6th, 1917. 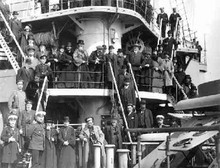 The Fourth State Duma. Duma deputies on board a warship. May 5, 1913

These Dumas were not entirely ineffective, and produced hundreds of laws, some of which, such as the Land Reform, helped Russia modernize, while others, such as enforced Russification, produced a less favorable response. What they singularly failed to do, however, was to establish the seed of democracy in Russia, and to provide a representative vent for the rising tensions within the rapidly industrializing country. And in the end, those tensions found their way out – in the October Socialist Revolution of 1917.