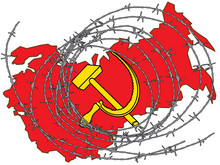 Rezhim is a word with many meanings in Russian. It denotes a set of rules or procedures to be followed in various areas of life. In modern Russia it is predominantly used in the spheres of politics, penal institutions, hospitals and holiday centers.

In Russian politics there’s always been a fine line between good and bad. When people are happy with the country’s leadership, they call it a system of power. But if they wish to accuse the powers-that-be of any wrongdoing – they use the word rezhim. And that’s the key difference between the Russian word and the English noun “regime” which is defined in many dictionaries as “the form of the government.” If somebody uses the word rezhim, it automatically means the imposition of all unconstitutional or enforced measures in the country.

According to many scholars, in a rezhim ideology prevails over thought. The rulers – hardliners in many cases – replace politics with their own interests.

In Soviet textbooks you could find phrases like “workers at the beginning the of the 20th century began a long-term struggle against the Tsarist rezhim.” All 19th century Russian history was taught through the prism of this word. During World War II the whole country stood up against the German invaders. The result of the war was total victory over the “Nazi rezhim” both in Germany and Europe.

During the Cold War the word “rezhim” was used to describe capitalist systems of power. A country that used non-socialist and non-communist methods as its ruling system was labeled by the Soviet mass media as a rezhim. The most vivid examples are the rule of General Pinochet in Chile and the military government in South Korea in the 1970s and 1980s. However, the power system in North Korea was never called a rezhim in the USSR. According to Soviet propaganda, it was a “friendly socialist country.”

Years went by and after the dissolution of the USSR the word turned the other way round. Historians revealed the horrible facts of Joseph Stalin’s rule in 1930s – the imposition of collective farms and the purge against military commanders, Communist Party activists, medics, scientists, and ordinary people who were careless enough to speak against the ruling party. Millions lost their lives. The word rezhim quickly began to circulate among those who disliked Stalin. Still, there are older people in the country who are very much offended by this notion.

So, any system of power may be called a rezhim – it just depends on the way you look at it.

In Russian correctional facilities rezhim refers to the rules and regulations governing inmates’ lives such as working hours, the amount of money they can make and spend and the number of times they may see their relatives. These rules apply to inmates who have been convicted by the court. In the Russian penitentiary system there are four rezhims that apply to different institutions:

The GULAG inmates at the Belomorkanal construction site

Always look on the bright side

But it’s not always that gloomy on “rezhim street” in Russia. This word also denotes daily routines in hospitals, holiday centers and children’s camps and in all places and institutions where a person is supposed to better their health.

This type of rezhim provides many opportunities to improve one’s health. It consists of walks, morning exercises, meals, watching TV and films, bathing procedures – everything conducive to the individual’s wellbeing.

Russian Imperial Duma Russia entered the 20th century as the only major European power without a parliament.