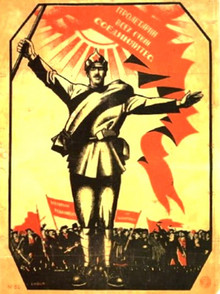 A proletary (or proletarian) is a key figure in the philosophy of Karl Marx. It denotes a person who does not own any means of production; his (or her) only source of income is to sell his own workforce. In the Russian language there’s also a collective noun, proletariat, that identifies the working class as a whole.

The word comes from the Latin proletraius meaning “those who make the offspring.” Reproduction was the main prerogative of poor Romans, who sough to give birth to future citizens who in turn would bring glory to the empire. They could hardly have imagined that two thousand years later a bunch of Germans and, later on, the people of Russia would become so serious about the concept.

The philosophy behind the proletariats

In the middle of the 19th century, German philosophers Karl Marx and Friedrich Engels saw the “the ghost of Communism.” According to their doctrine, the proletariat had the potential to become the key driving force of the revolutionary change.

Marx strongly believed that a revolt would be successful if all proletarians united in their endeavors. Intellectuals, according to the theory, were not an exception. Marx called them “proletarians of intellectual labor.” Engels also hoped that those small businessmen who failed to compete with the rich would join the proletariat.

But the key thesis of Karl Marx was that proletarians would become the “grave-diggers of the bourgeoisie.” And he hoped that this struggle for power would lead to the formation of a “proletarian dictatorship.” According to Marx and Engels each proletarian would become a member of one global social class and nationality, in this case, would no longer matter.

That idea became the “grandfather” of the famous slogan “Proletarians of all countries unite!” In the USSR the phrase was everywhere: on the national emblem of the country written in 15 languages, on the facades of the buildings and on the front pages of all major Soviet newspapers.

From theory to practice

There have been many attempts to put Marx and Engels’s concepts into practice. The most famous is the Paris uprising of 1871 in which workers established the Paris Commune – a local self-governing territory that managed to last for more than 90 days before being crushed by the army. Its leaders were thrown in jail.

At the very beginning of 20th century the Russian Socialist Workers’ Party – the predecessor of the Communist Party - adjusted the concept of the proletariat revolution. Its leader, Vladimir Lenin, had created his own revolutionary theory based on the ideas of Marx and Engels. The concept that the “proletary has nothing to lose but his chains” finally “fired” in 1917 during the Russian October Revolution. That was the time when, according to Lenin, the proletariat began to establish its “dictatorship.”

However, the proletary did not lose his chains and won little. Low class workers continued to work for nothing while communist propaganda bloomed. Most of the proletarians were made to believe that due to their hard work it would be possible to build a bright future for all workers of the world in a short time. 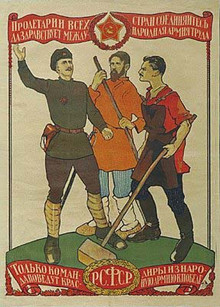 Some proletarians were enthusiastic. They believed the concept. They were ready to go anywhere the Communist Party might send them. Others just wanted to make their way to the top and use their proletariat ideology as a means of getting there. And it was not difficult to do so as there was always a “quota” for workers in various Party Committees and Soviets (national and local parliaments). Professionalism in this case did not matter.

How it really worked

There were distortions in the process. One of them was a new trend in 1920s lifestyle known as proletkult (the culture of the proletariat). Its key elements were the following:

- total devotion to revolutionary ideas;
- attending political classes (reading and discussing the works of Marx and Lenin) after work;
- negation of the ideals of the past (literature, ballet, art);
- “newspeak” for proletariat with lots of abbreviations for organizations (hence abbreviations like KGB) and even names of children (for example Vladlen – a boys name meaning Vladimir Lenin).

Another distortion is the so-called “proletarian internationalism.” The Communist Party was always ready to help proletarians in other countries to fight against the rich. The positive thing about this was that some workers from other countries managed to get a good education in the Soviet Union.

The best example here is Cuba, which is well-known for its doctors throughout Latin America. But there were also negative consequences: for example, “proletarian internationalism” became a very good cover for corrupt officials to sell arms all over the world.

However, it was not all that bad for the proletary in the USSR. During the Soviet period workers slowly learned how to save a little something for themselves. By the end of the 1960s miners, machine-builders and metal workers could afford an annual holiday and could live on their salaries thanks to the fact that education and housing in many cases was provided by the state.

But after the collapse of the planned economy the proletary began to suffer greatly. In Soviet years many cities were built around one big factory. So when such enterprises went bankrupt the workers automatically lost all means to feed their families. Thus began the long process of transformation. As one worker put it in the 1990s: “The time has come to realize that it is much better to be a “pro-fessional” than a “pro-letarian.”