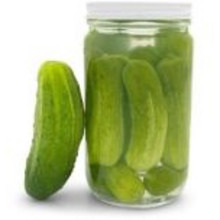 Rassol is a solution of salt in water with the addition of spices and herbs. It is widely used in Russia and in the republics of the former Soviet Union for two main purposes:

- to preserve pickled products for long periods of time;

The most popular vegetables for pickling in Russia are cucumbers and tomatoes. Some people like to mix both of them “in one go”. 3-liter jars made of glass are best suited for this purpose.

To pickle the vegetables, one has to take a jar and put all the spices and herbs at the bottom. Some of the most common “jar-fillers” are garlic, chili peppers, laurel leaves, parsley, dill, horseradish, and the leaves of black currant and oak.  Then the jar is filled with the desired vegetables. And only after that is it time to add the rassol.

Normally you add a tablespoon of salt per 1 liter of water. Experienced housewives sometimes add sugar and vinegar to make vegetables taste better. Then the liquid is poured into the jar all the way to the top. Then the metal lid is placed on it and the jar is stored in a cold place. In the old times they used to put wooden barrels full of pickles into rivers and lakes. Now people use cold cellars. In a couple of months, both pickles and rassol are ready to eat. But some of the jars stay good for a year and even longer.

One warning: all these procedures have to be as sterile as possible – if you don’t wash your cucumbers clean or if you don’t close them tight the jar may “explode” and the pickles together with rassol become a waste.

After all the pickles are eaten, the leftover rassol may still be of use.

It may be a good “sauce” for mashed potatoes and stewed meat. It goes as a substitute for vinegar in various salads.  But the most popular use is to put rassol into soups. Two most popular ones are: 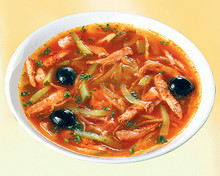 - “rassolnik” – a soup with meat (or chicken), potatoes and pickled cucumbers where you add rassol at one of the last stages of boiling.

- “solyanka”  - a spicy substance of meat, mushrooms, olives and lemon on a salty base.

All these soups, like rassol itself, (especially cucumber rassol) are good to save people from hangovers. The secret is simple. Alcohol causes dehydration which leads to splitting headaches and the inability to work. The main advantage of rassol is that it contains vitamins which help the body to hold water. One of the most healthy elements in rassol is the vitamin C produced by the dill. It stabilizes the work of the heart and muscles.

Rassol is especially useful on January, 1, to cure people from the hangover they get during the New Year celebrations: in many Russian families it is a night of heavy drinking and eating. However, of course, if you lose your better judgment and drink too much, even a 3-liter jar full of rassol won’t save you.

This liquid is also useful to ladies as a substance that keeps their skin from getting old – especially if it is cabbage rassol rich in vitamins and other useful microelements. It is possible thanks to the liquid fermentations produced by the cabbage during the pickling process (the water for pickling cabbage is not used at all).

Rassol is also one of the liquids used to build up appetite.

The fact that rassol works wonders made businessmen start thinking about industrial production.  One can already find jars filled with the product in Moscow supermarkets. The biggest “selling point” for them is the fact that rassol does not contain any chemicals that produce undesirable side effects.

Some modern Russian poets mention rassol in their verses as a source of optimism and good health. And there’s also an old Russian belief that if you drink rassol during one of your dreams it is a sign that you’ll have a good rest.